adminPosted on October 13, 2019 Posted in Miscellanea — No Comments ↓ 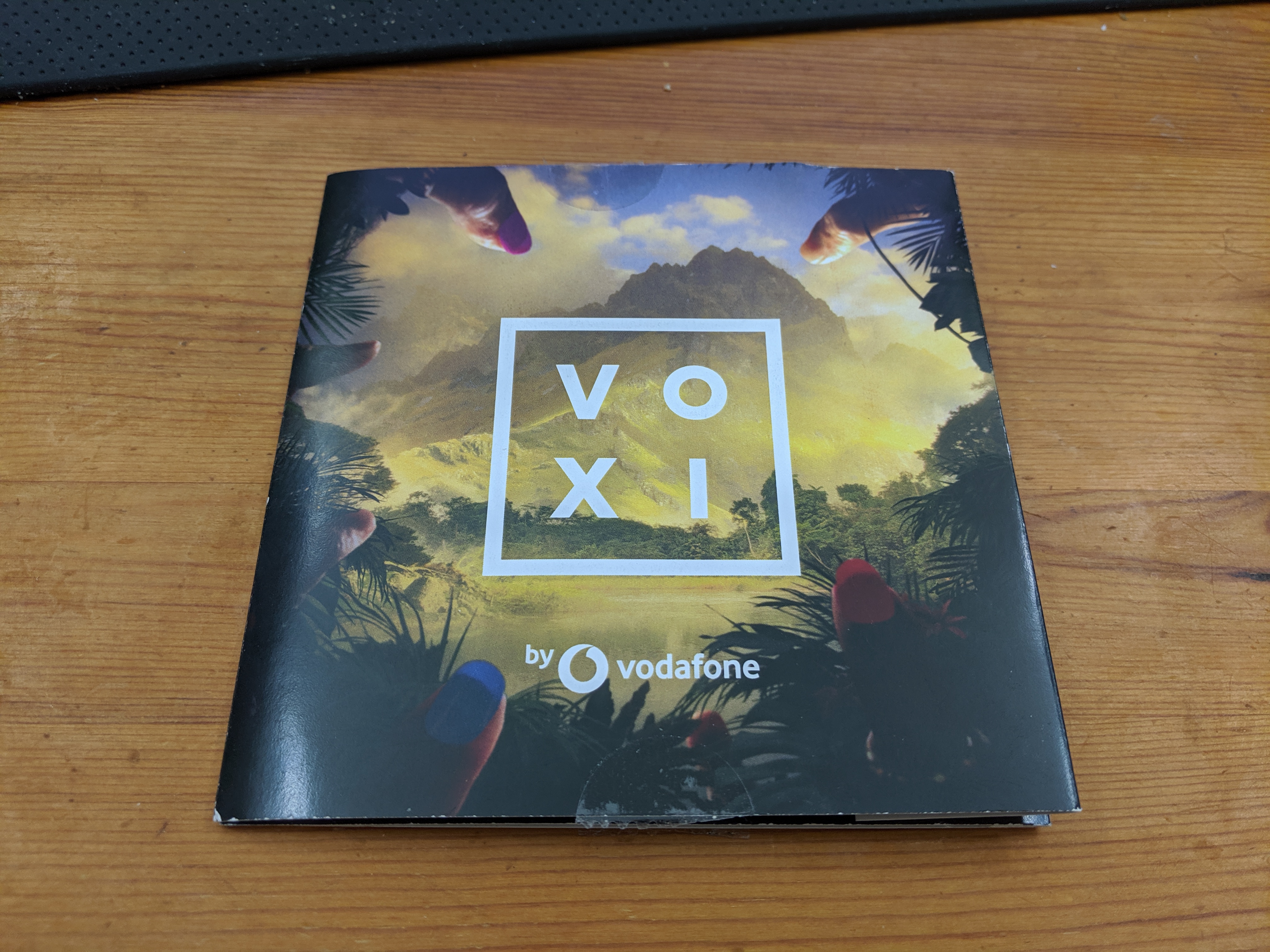 VOXI – has it got more to offer than those creepy TV ads?

After having been out of the country for some time I felt it might be due to have a see how the state of things in the UK mobile market are and I notice that VOXI has now been spanked for being ageist and is now available to all.  I also saw their TV ad-s and dear god what were they smoking when they came up with that super disturbing thumb monstrosity?????   Anyway, since Vodafone suddenly got serious about things and introduced an Unlimited plan so its no longer just 3 doing so, O2 and EE have been forced to up their games too.  Now since the wild success that Gifgaff has been for O2, Voda have been trying to repeat it with Voxi.  I like the idea, unlimited “social media” traffic and some decent data bundles, 45GB for £20 isn’t really that bad for any network other than 3. 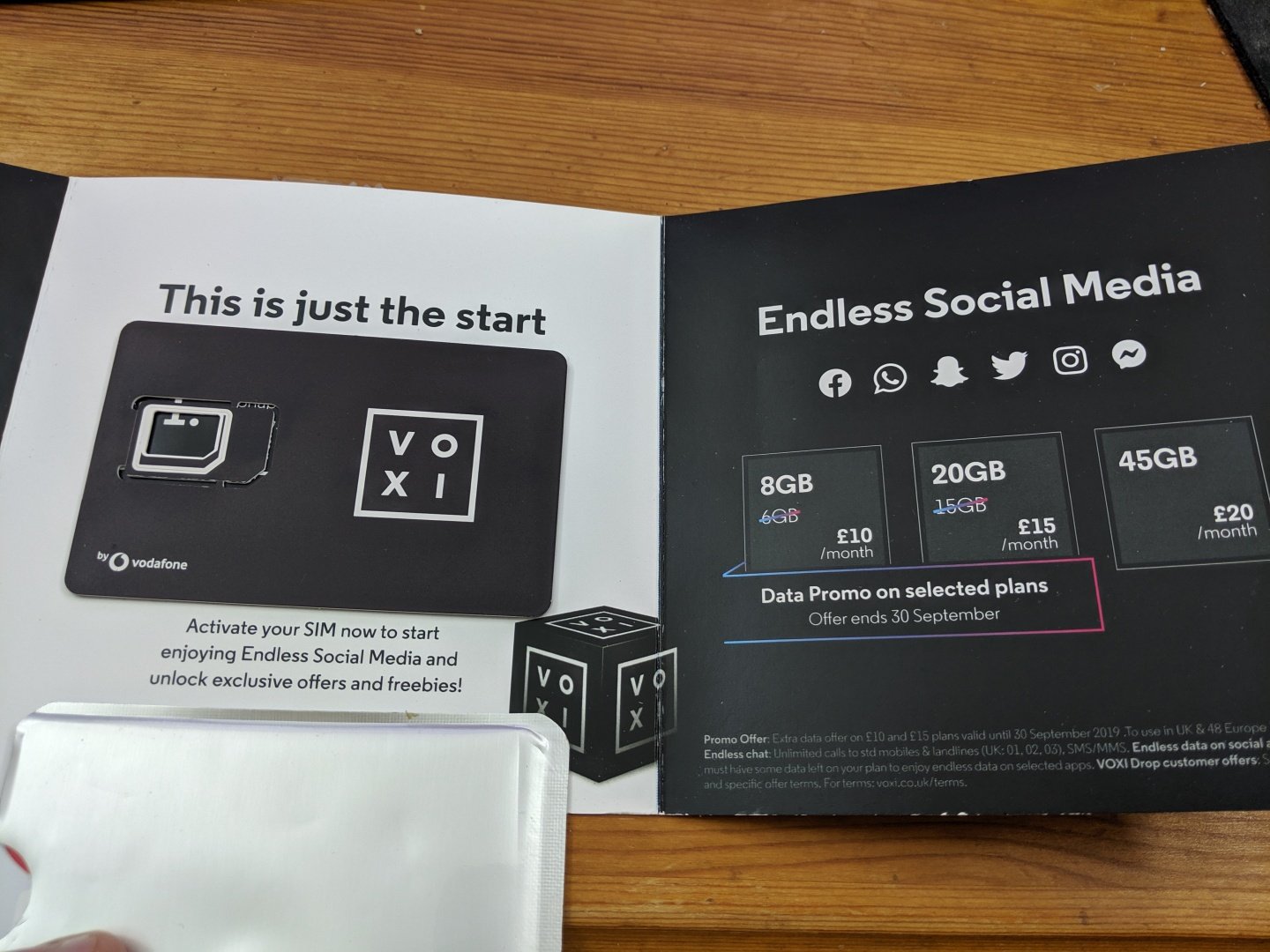 You see 3 are still somewhat the plucky upstart and seen by many as the el cheapo network and a bit, bargain basement.  Vodafone on the other hand have pretty much always promoted themselves as premium, more expensive but better network.  On paper it certainly looks like it should be too, Voda have a 2g, 3g ,4g and its 5g network just launched.  This means that they have a splattering of spectrum all over the place.  You see this matters since they can refarm all of it for 4g if they want so they have massive potential.  To illustrate, they have spectrum in the 800, 900, 1500, 1800, 2100, 2600 and 3500MHz bands.  In short they have tons all over the place and this gives them the potential to have massive carrier aggregation going on to give crazy speeds, high frequency for capacity, low for area and building penetration and that wired slab of 1500MHz as a downlink only supplementary band to hike download speeds ever higher. 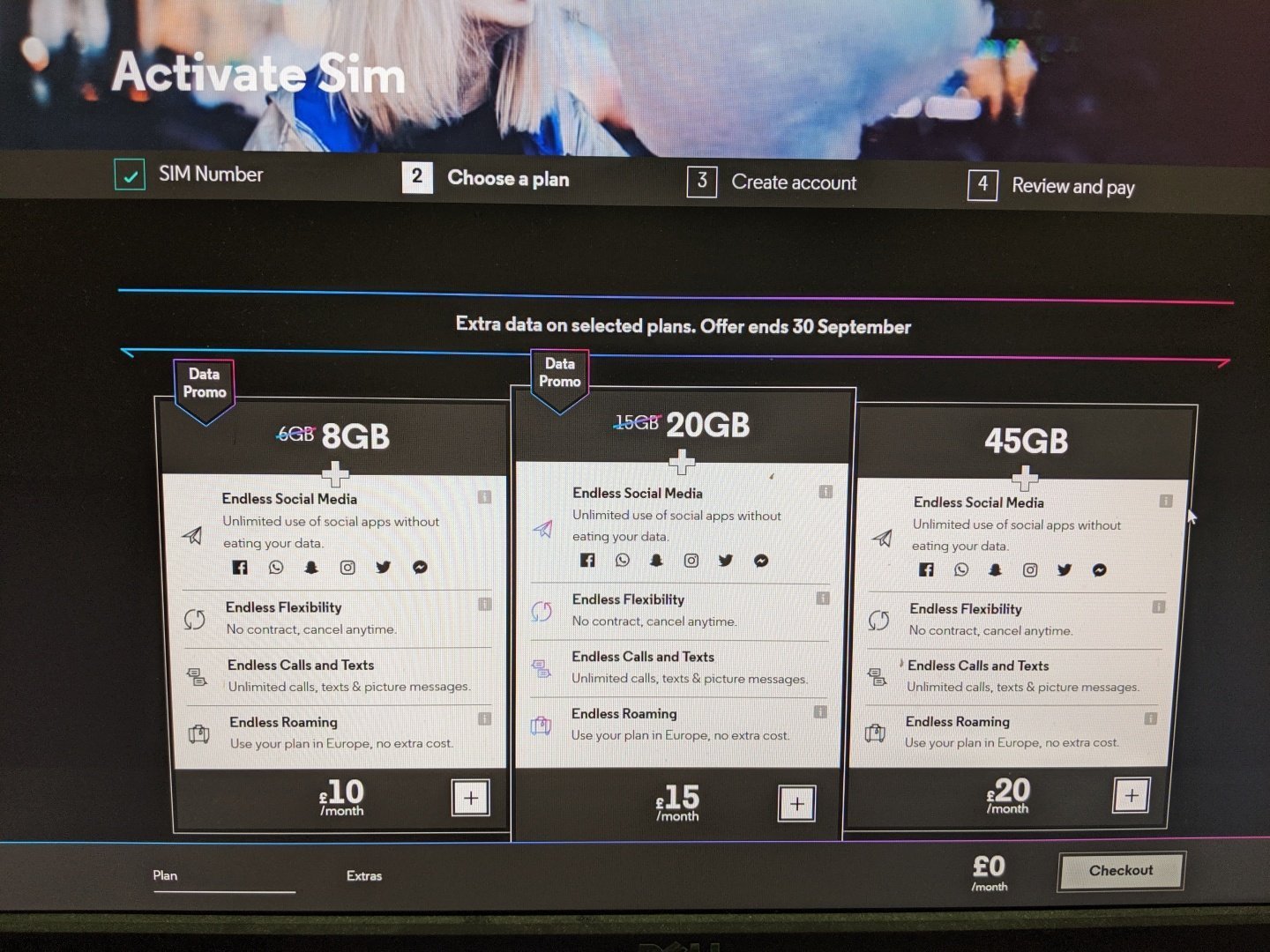 So, in theory Voxi gets you the same network you would on Vodafone directly but for a not bad price and its all a prepay/rolling monthly contract so no credit check, very handy if you only just moved to the UK and electronically barely exist.  This all sounds great right?  I thought so, so I ordered a Sim to give a try and see how it is without committing to leaving my existing network. 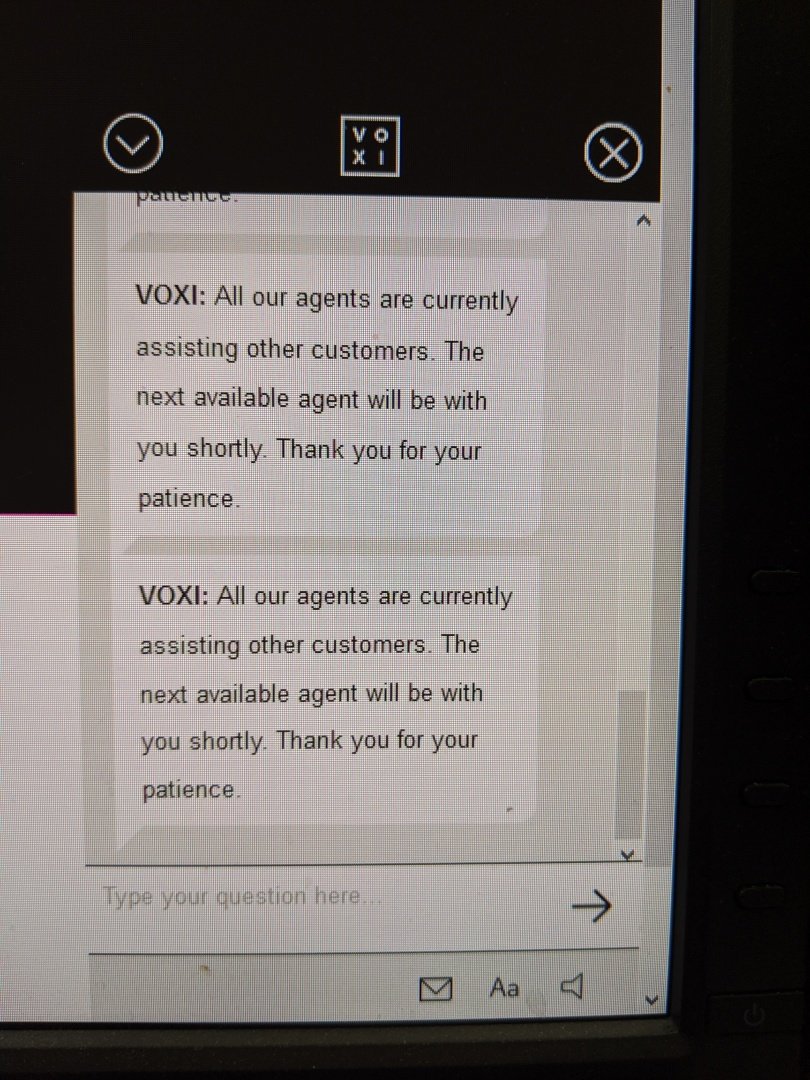 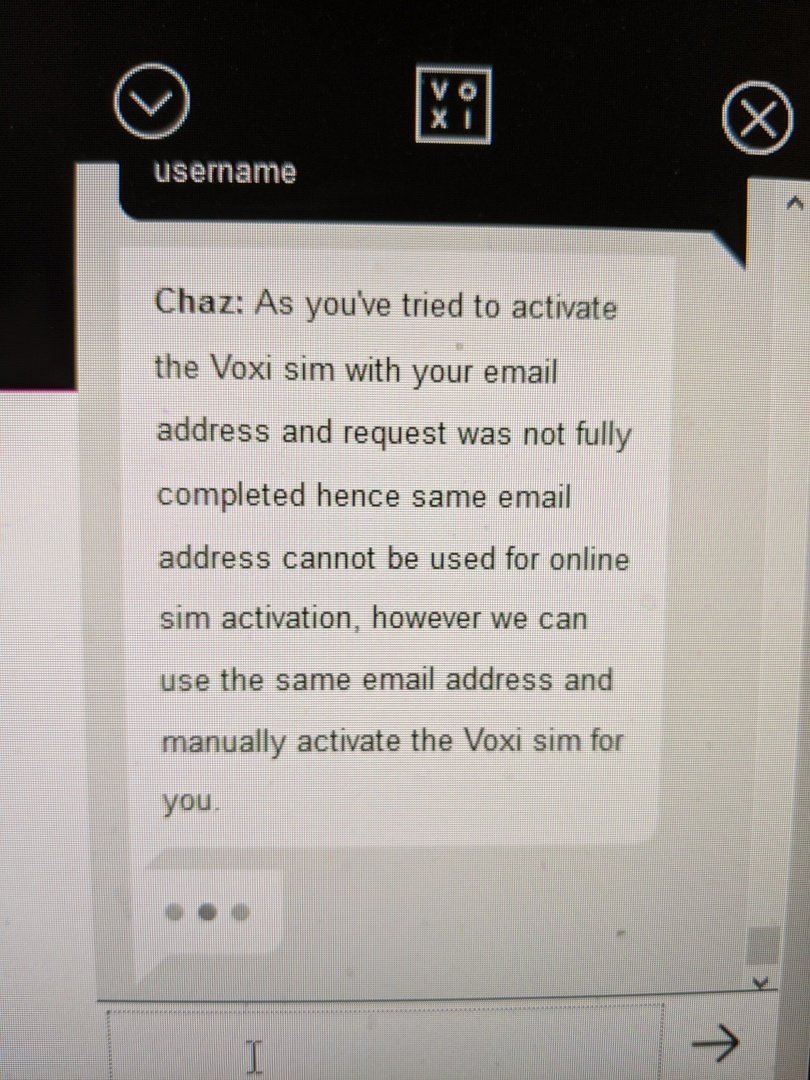 In goes the sim card and no network, a phone notification tells me the sim isn’t provisioned.  I think go to the voxi site to activate it, which seems all fine then demands I register, fine, and then it tells me my desired username is taken.  Strange but okay, so I try another, nope.  Eh??? I try to contact Voxi with their 24-hour web support.  Little did I know by that it means it takes about 24 hours for you to get some one on the webchat.  Once I did, they tell me oh, well because your registration didn’t go through the first time its now used your email address so you can either use another or register through me, by which I had to give all my info including password, pin, pets name etc etc which seemed rather lacking from a security standpoint.  Aren’t we always told never to give your passwords in full to staff by companies? The other option was go to a Vodafone shop and have them do it for me.  This was not a good start and its feeling like VOXI is Vodafone’s impression of Steve Buscemi, How do you do, fellow kids? 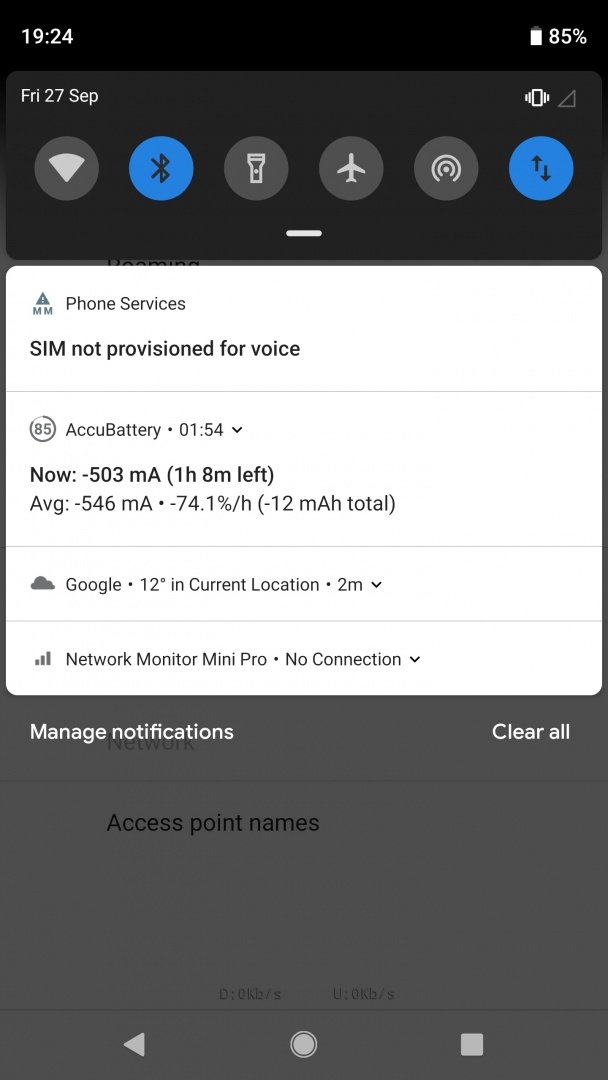 Okay, got the sim activated and I have no data, wtf???  Okay let’s install the VOXI app, its prob just no apn set for them, right?  Oh, there is no VOXI app, oh and no I can’t use the Vodafone one either.  Err, okay, ahhhh if I text WEB to them, they will send me apn settings.  Nope, 10 min later nothing so  I send it again and…… nope.  Sigh, lets try manually.  Okay now I have data and I’m eager to see just what bands they are using here and what lever of carrier aggregation they are using having sooooo many bands.  This cant be right, I am only seeing 800MHz and a dash of refarmed 2100MHz.  that cant be right can it, I mean they didn’t refarm the 2100 until fairly recently as it was all 3g until they refarmed their 900MHz to 3g and freed up most of their holdings at 2100 for LTE use.  It cant be surely?  Granted I’m not in a super high density area so I didn’t expect to see any 1500, but maybe some 1800 and 2600 should be easy enough to stumble across?  No. 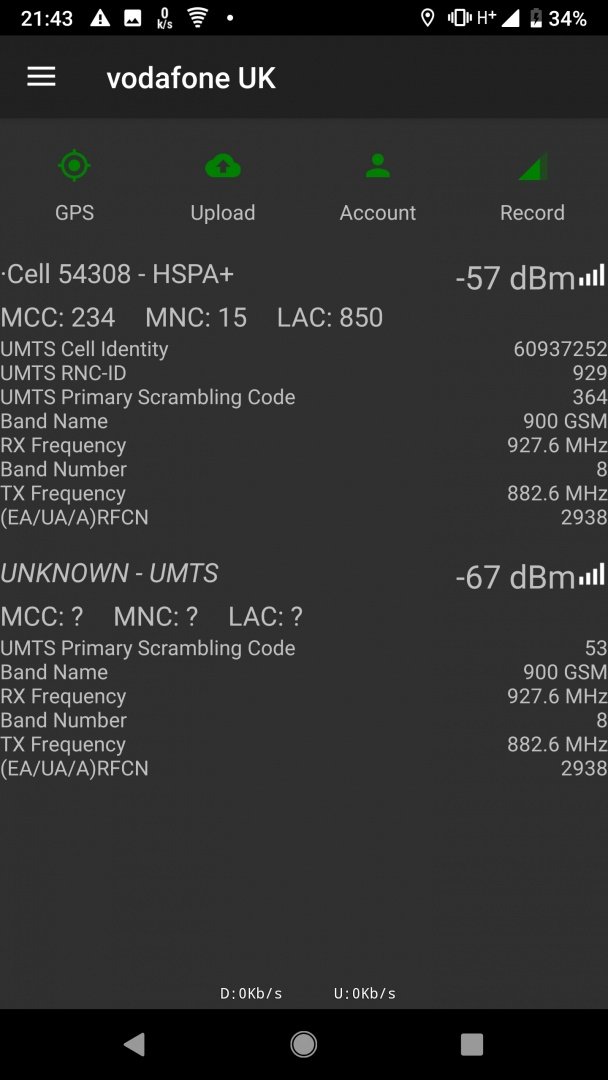 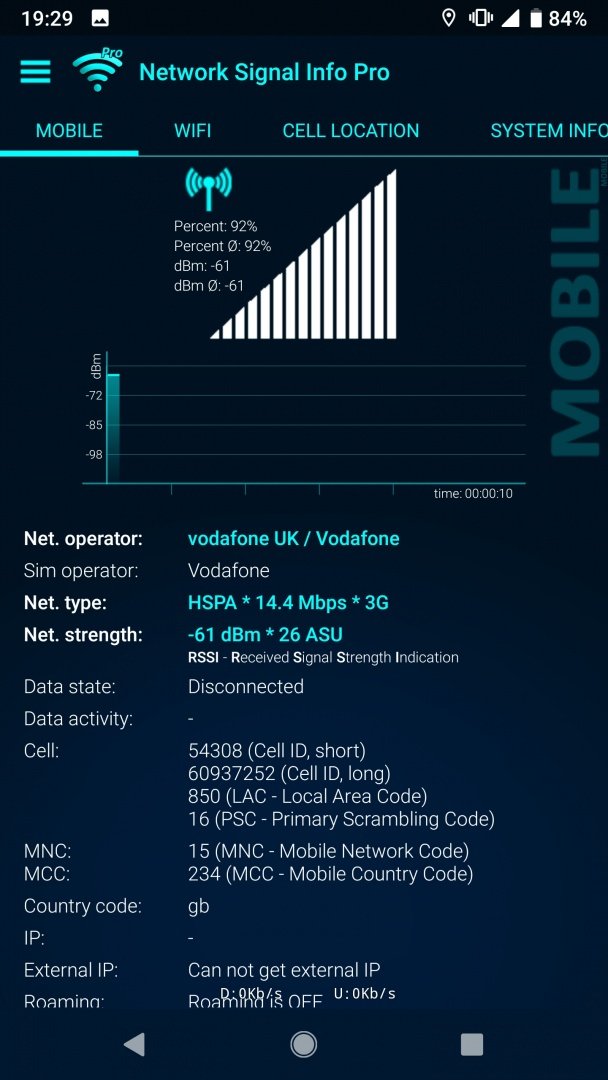 Today I went for a tour round the city and while 4g coverage was great thanks to all that 800MHz (even deep into Ikea) but there was a freighting lack of other bands, 2100MHz showed up regularly but almost nothing of anything else.  In the city centre, yes some 2600MHz appeared but the 2100 pretty much went away.  Seriously Vodafone????  Loading up Cell Mapper and setting to Vodafone and going through the various bands I can see, it would seem I am right.  Going through the different bands and they are almost all blank for nearly all of the UK.  I am very disappointed as Voda has such massive potential with its spectrum holdings but this is just cheap and lazy. 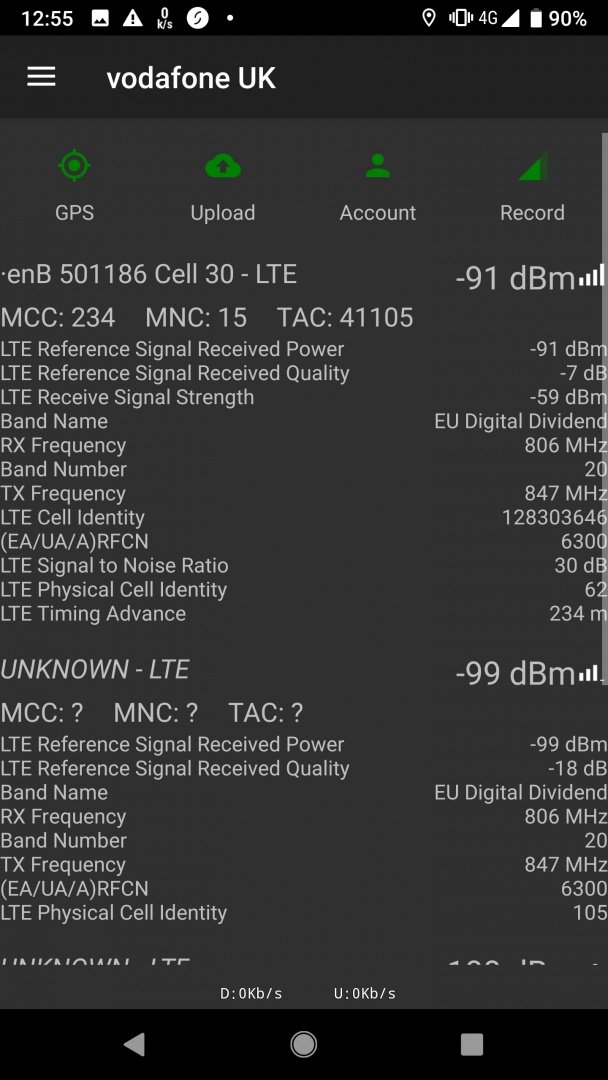 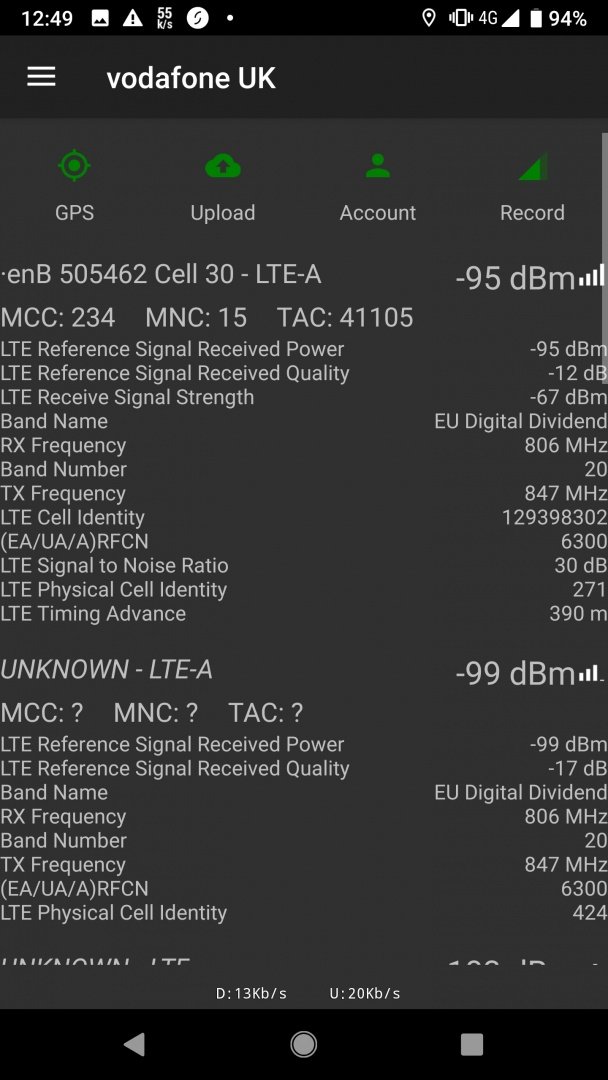 Traveling a little further afield (to parents) and the 800MHz coverage really does start to show itself as a plus.  Compared to 3 and their moronic focus on 1800MHz in the countryside the wide coverage from the 800 is perfectly suited and gives excellent coverage.  I grant its not mega fast as when on 800 only you at best get about 10mbit but its blanket coverage.  3 however drops to 3g constantly, but when its 4g on 1800 comes back its faster, for the brief time your covered by that cell on the motorway.  Voxi it seems would make a good option for those traversing the green wastes between town with regularity. 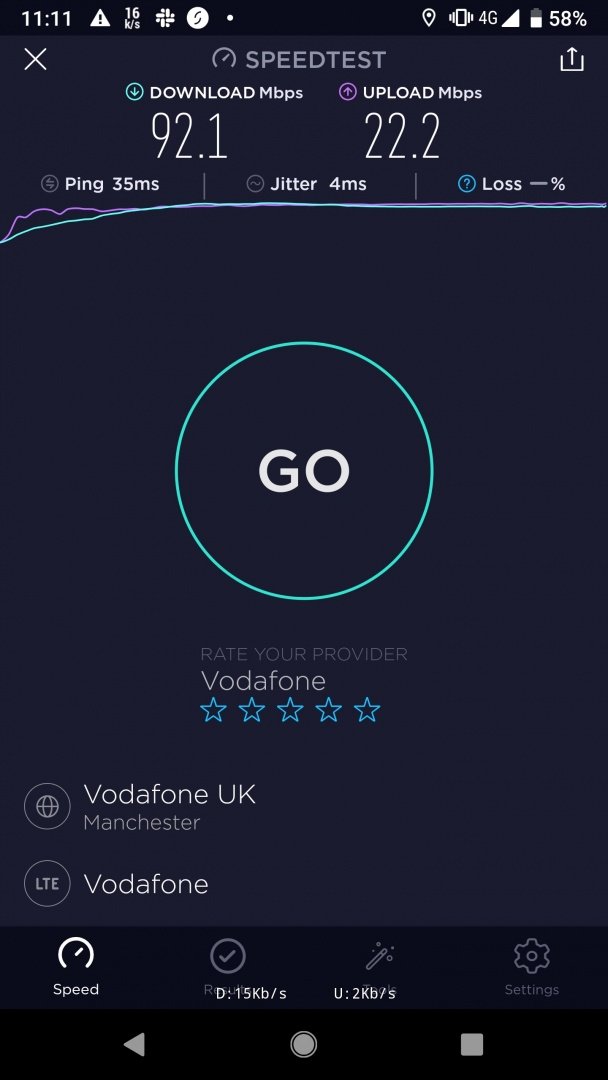 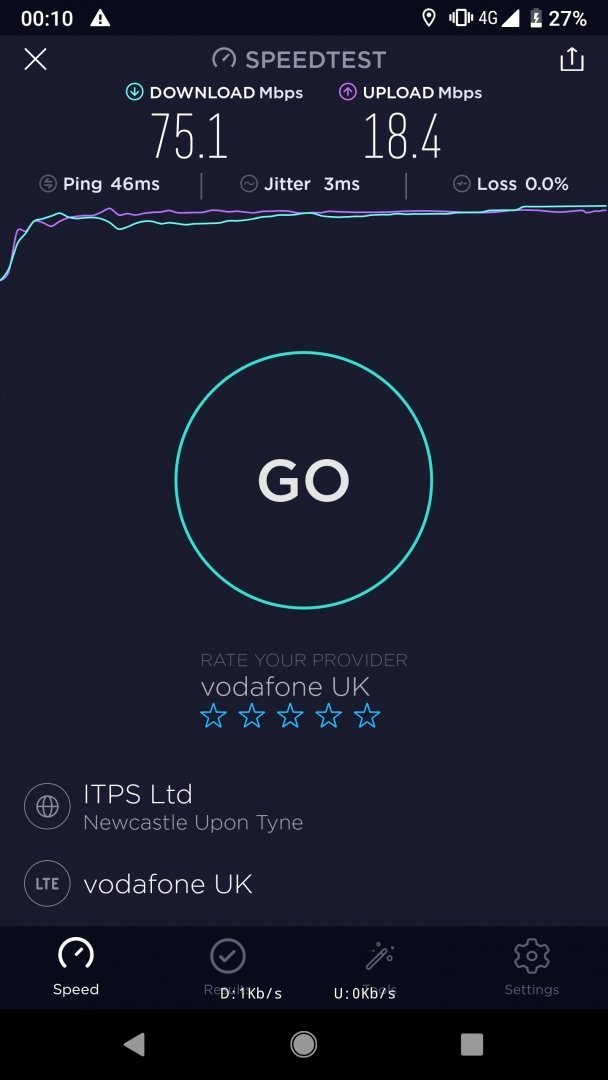 So, well 45GB for £20 is not at all bad.  It however can be beaten if you are willing to take a contract.   Where I think the real value proposition is if you want to give a child a phone, there is a fixed fee they cant run up a bill and no matter if they use all their data, at worst they still can use social media so they never completely run out of data as it were.  If you are an adult just moved to the UK and cant get a contract or you only plan to be here for 6 months then again, it’s a pretty great option.  Decent data limit for a reasonable cost. 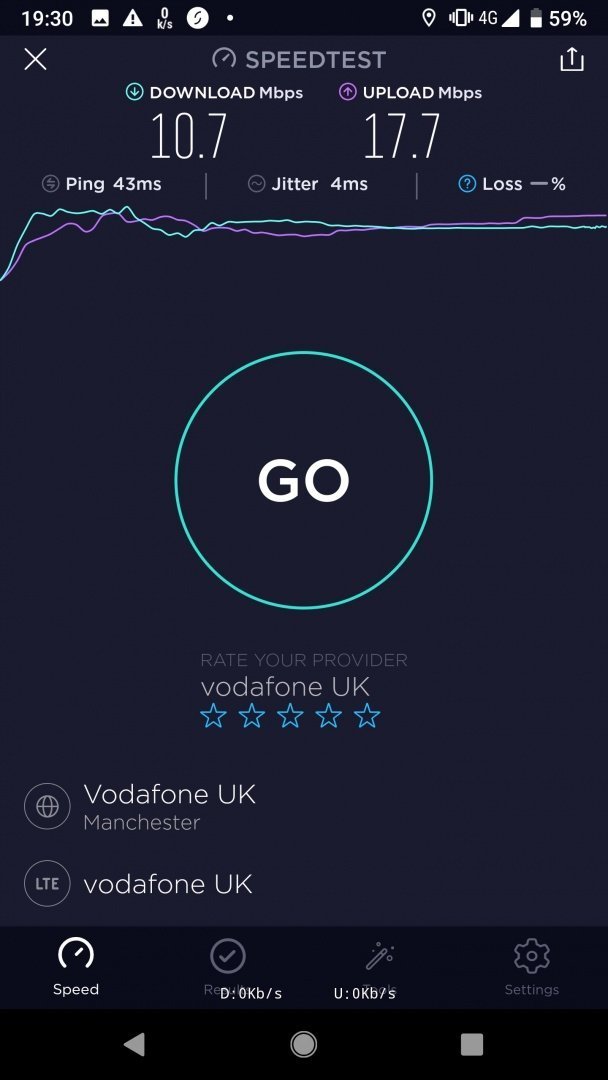 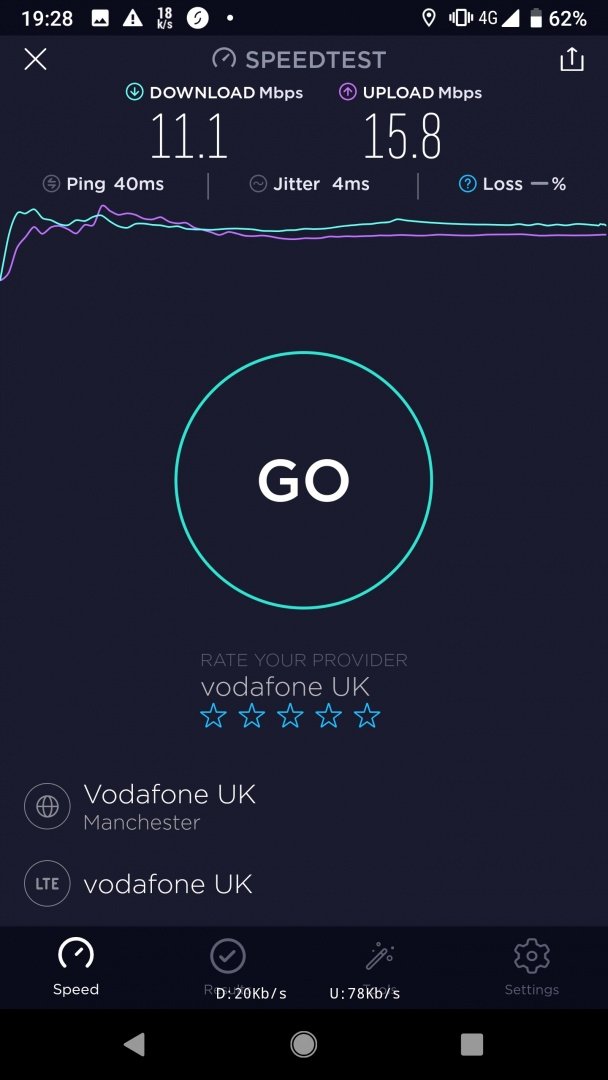 Well so much of this is about Vodafone as the network rather than VOXI itself, actually most of the negatives come from that.  Voda could be great but it isn’t, its not bad, but really.  No VoLTE, almost no use of LTE other than 800MHz with scattering of 2100MHz is frankly not really acceptable from a network that has always billed itself as a premium, you pay more but its better operator.  VOXI however is not billing itself as that, its cheaper, no contract and “endless” social media.  This it does really quite well.  Giffgaff will only give 40GB and to get “endless” social media type data would requite you to move up to £25.  Smarty however will give you unlimited everything for £18.75 which is cheaper and you get more. 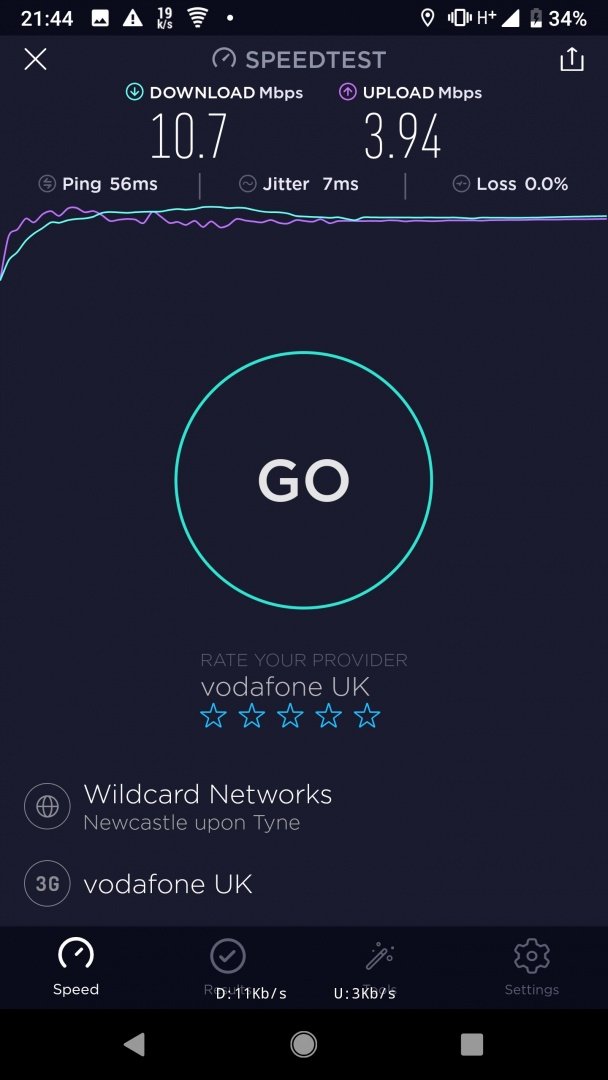 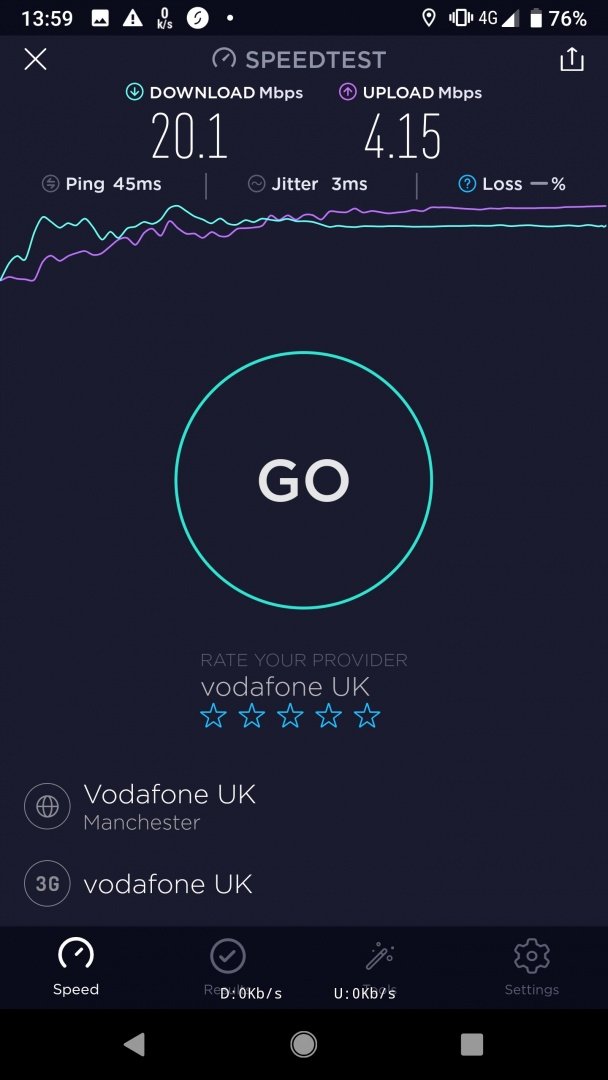 Things with networks have gotten much more competitive, now 3, O2 and voda all have cheap youth friendly MVNO’s and they are each pretty similar value for money (unless you need tons of data in which case 3 is your only option.)  Those not wanting a contract (or cant get) now have three reasonable options to choose from but if you are currently with one of the other two and were hoping that Vodafone may give you a big network speed or quality boost…….. sorry but unless you’re out in the sticks all the time, no.  A solid option, decent value, very nice coverage, so so data speeds.