adminPosted on February 14, 2018 Posted in Miscellanea — No Comments ↓ 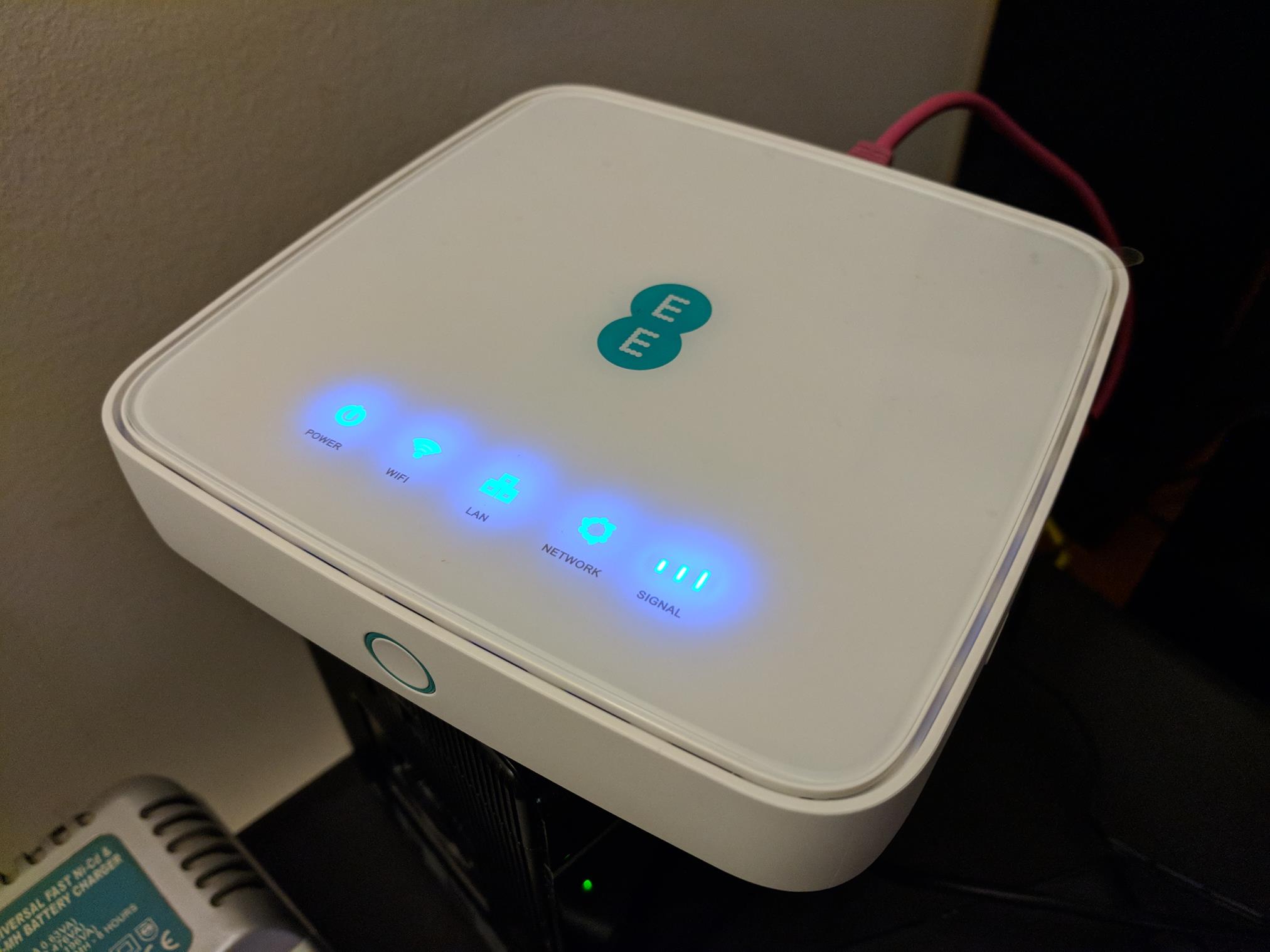 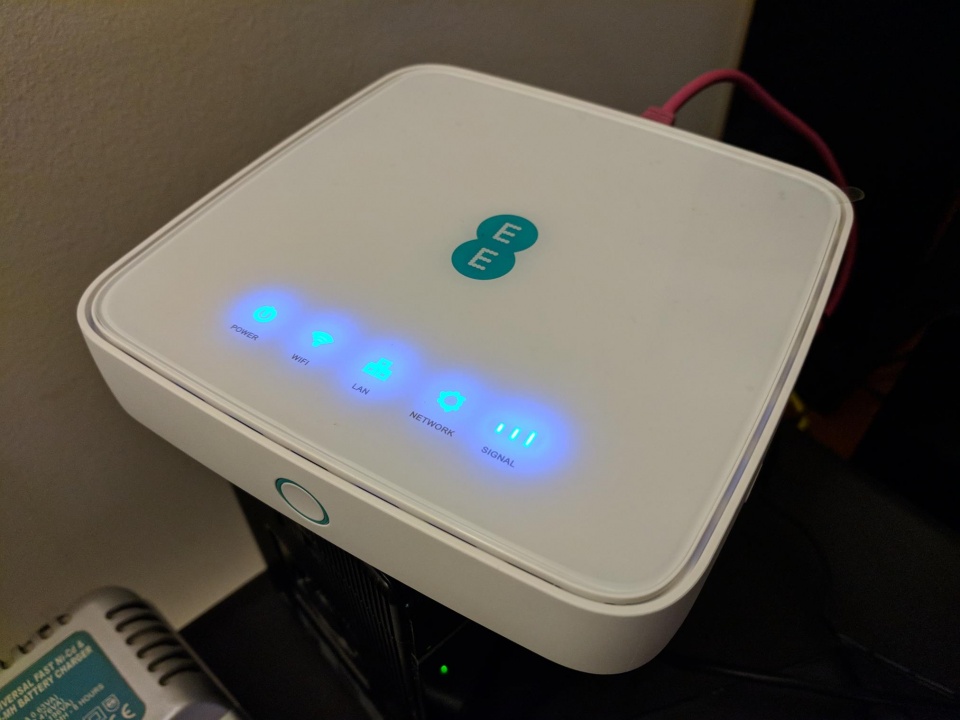 So what do you you do if you need internet but have no land line, maybe its just to cover until you do or maybe its because your not living there long enough to get installed?  This is EE’s answer to that question.

Well first of all I must talk about how you get the device as clearly its only available from 1 source therefore the buying experience is integral.  Now if anyone knows me they will know I think BTEE is the devil in telco form.  However, I presently have no land-based internet connection, EE is widely recognised as having the fastest UK network as it has 3 bands it can aggregate and has oodles of spectrum to spare.  Not to mention I live a stone’s throw from an EE mast.  So I was prepared to lie with the devil if it meant faster internet.  However, to get the package I wanted, one offering a reasonable 200GB a month you must, MUST, buy the 4GEE home router from them.  EE will not just sell you a sim card with 200GB.  This meant as I didn’t want a contract that I had to cough up £100 to buy the router.  A device I don’t really want but it’s the only way to get the 200GB package which I do want.   Its extortion but I want the fastest I can get so I’ll pay it. 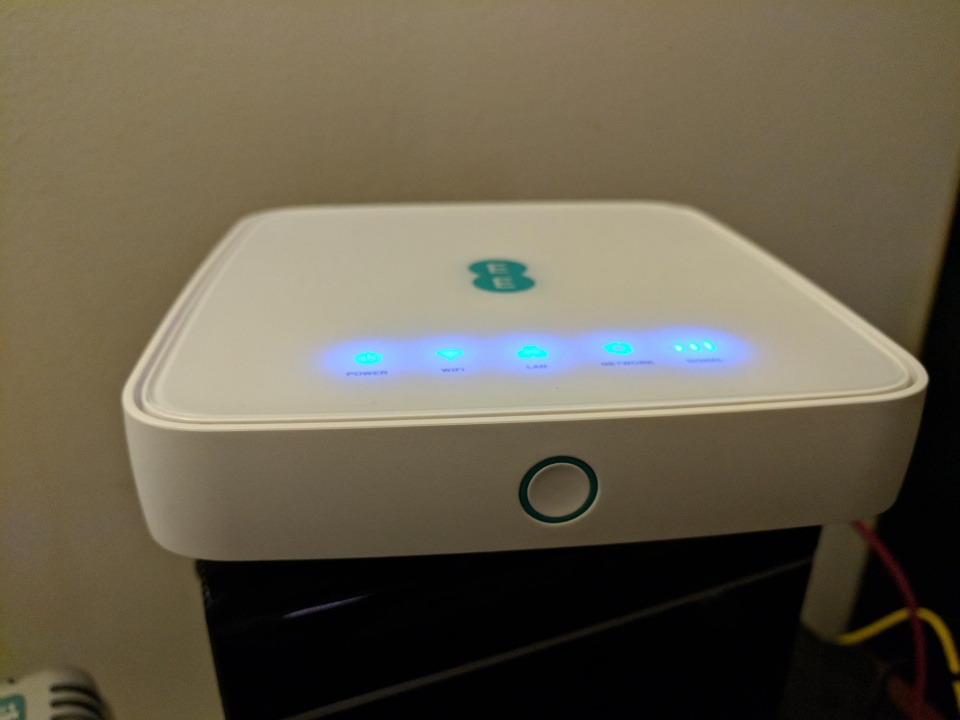 Opening the box is nothing exciting, the box is only available in white and its bland.  2 ethernet sockets on the back seems a bit stingy but network switches are cheap.  Oh, it can take external aerials, oh but doesn’t include any and I’m told by EE that they will only sell you some if you prove to them you have a poor signal and that if I want I should just go elsewhere to buy them.  However, as I live so close to a mast I would hope it is not needed.  Connecting it to power I get a full bar signal but it has no detail in the db of the signal so I can’t tell how strong it really is nor can I see any information About the connection other than its 4G. 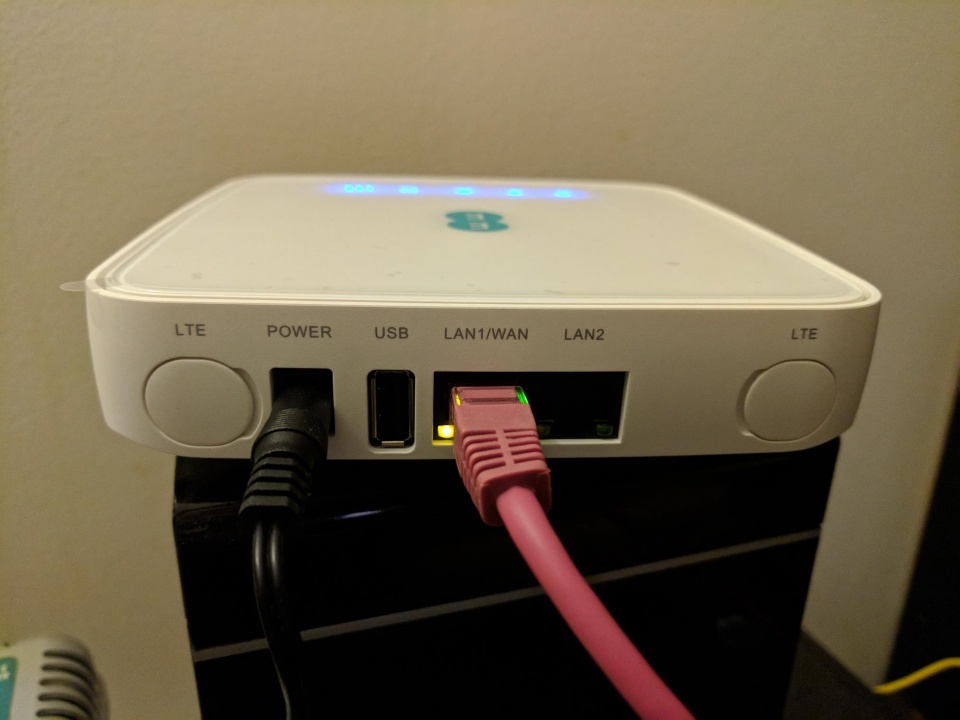 The box itself is, meh.  Black would be so much cooler but it comes in white, and it lights up with blue for 4G and something else for 3G but why would buy it if you can’t get 4G, given the bands for 4G your more likely to get it than 3G only from EE.  So, it’s a box its inoffensive to the eyes.  As routers go its basic in the settings available.  Really there just isn’t anything interesting to say about the thing.  It works, does nothing special.  You strangely get 2 ethernet sockets which seems a touch mean given its size id have expected 4 like most routers but this is a remarkably bland little box.  The most interesting thing about it is it has little screw hole on the bottom so you could wall mount it.  That could be handy to stick it in an attic, rather than run an external antenna if you live out in the sticks. 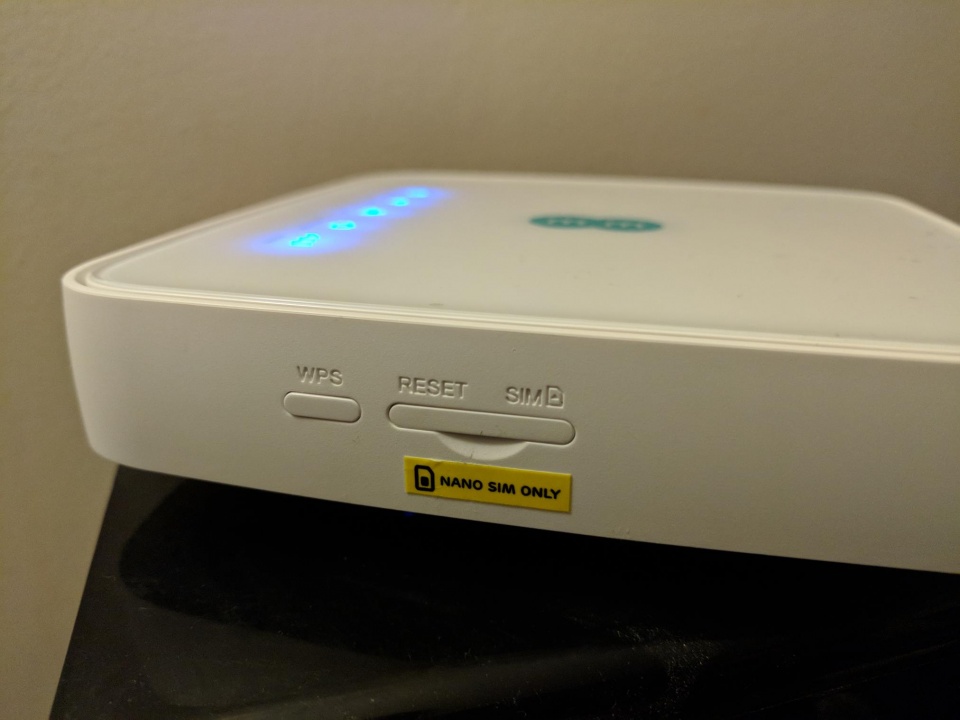 Meh.  Lots of yellow and turquoise and above all, basic.  Though you very handily get a link to check the data allowance on the sim card and that you do not need to log into the router, just access it so it means anyone on the network could check it and not have to have admin access.  Otherwise……. It’s a basic router.  Yes, there is a link to check text messages you may have been sent but why would you ever give the number out? 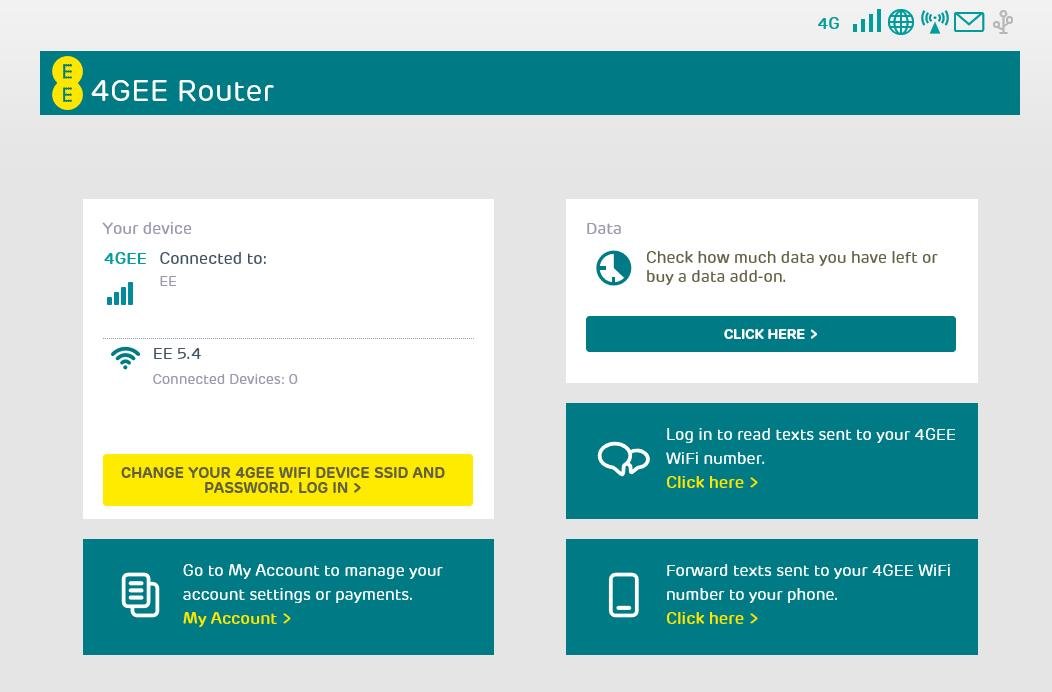 So much of this device isn’t really about the device itself its about the network.  The two key aspects being speed and quantity of data.  The data quantity is something I can speak of and it can apply to everyone but the speed, well it’s a different kettle of fish.  What I get here, right now, will be different from what I get it the evening which will be different from what I get at 3 in the morning.  Then distance from the mast matters lots and then what others are doing using the same mast matters and then of course general network backbone congestion.  Usually I would say, to test something like this you should grab a PAYG sim from the network and test it where you plan to use but…… EE only give you their full unrestricted network speed if you are on one of their higher end plans.  PAYG are limited to 30mbit.  While I hate this policy its there so take everything I say about speed with a bucket of salt as what I get may have no bearing on what you may get. 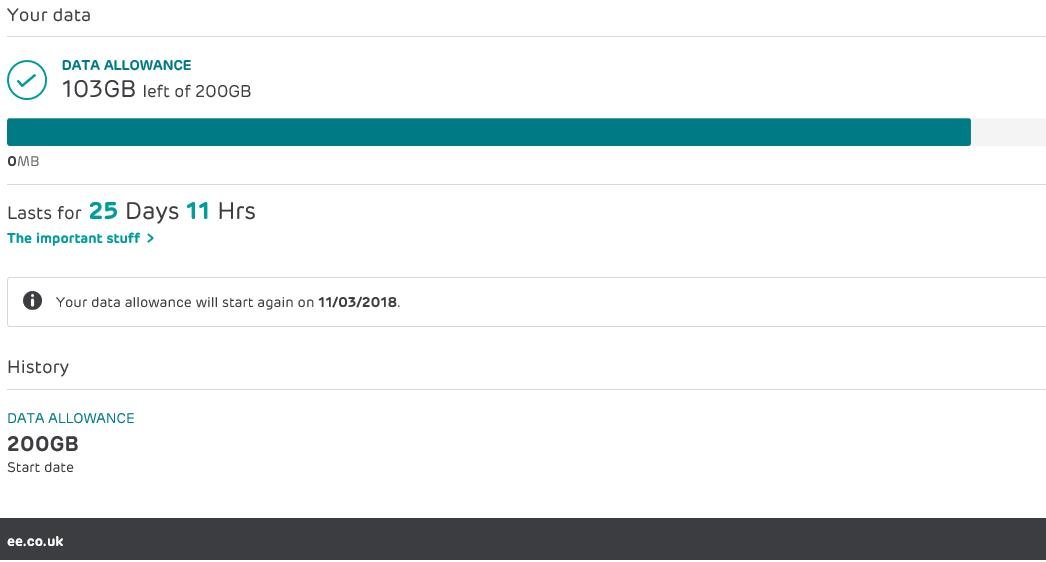 Having gotten a full bar signal (whatever a bar means) and being so near an EE mast I would like to think I should bee getting as clos to the best EE can offer as possible.  However, I was disappointed.  The highest I ever saw it peek at was mid 60mbits but its more consistent speed was 40mbit in the day and mid 20mbits in the evenings.  Which frankly, I was hugely disappointed at.  I’m right next to a mast so I would have hoped to get an amazing speed and while the upload was always super impressive I didn’t care so much about that.  If you however upload tons then this is waaaaaaaaaaaaaaay faster than the 20mbit you can get on a land connection. 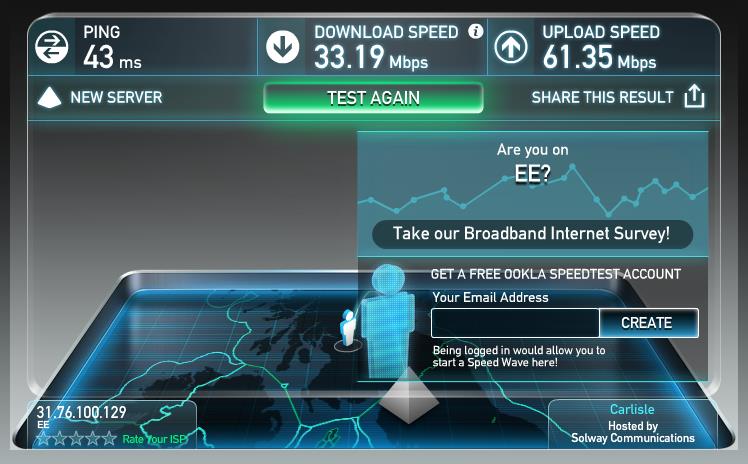 One of the more frustrating aspects in that EE have 2 plans in particular that are of interest, 100GB for £45 and the 200GB I have for £60.  Yeah this is a bit pricey but what’s really the most annoying aspect is EE will only sell you these if you buy its 4GEE router, free on a two year contract or £100 for the rolling 30day.  WHY???????  This’ would be an ideal offering for those temporarily without a land connection £60 for a sim with 200GB on to cover you while the other end of the company (Openreach) connect your land line as slowly as they possibly can.  But you must cough up £100 for a router that does nothing an old spare handset couldn’t do.  I find this extremely annoying.  However, if you live outside of civilisation and you want the 2 year contract then I guess it matters less but really EE, why must we use the router you have picked?  Or rather why must we pay for it as there is nothing to stop us whipping out the sim card and putting it in anything we want.  Something that may not be useful to me but…… any road warriors out there could slap it in a spare phone or MiFi and away.  Potentially something massively useful for people at shows needing to upload masses of video content. 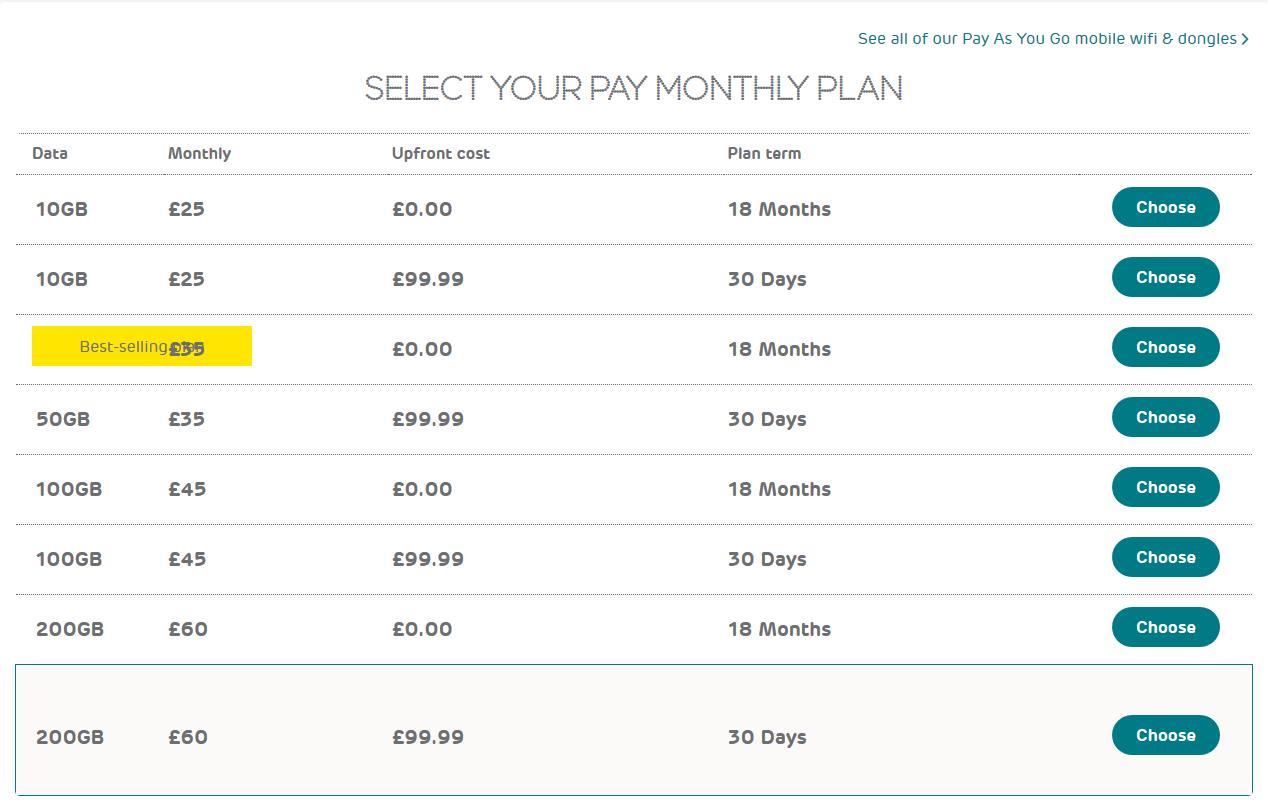 What??? Yes.  I noticed that some sites would just not work on EE.  It wasn’t the naughty filter as I turned that thing off but things like, logging into my bank account would generate a network error.  Fire up a VPN and it worked fine.  So, it would seem that EE is intercepting traffic and moderating it in some way.  I have no idea why other than for traffic shaping but I find it rather suspicious, its malicious at worst and more likely at best, its just a shoddy service.  Incompetence or deliberate it makes me uncomfortable that EE are interfering with traffic to my bank. 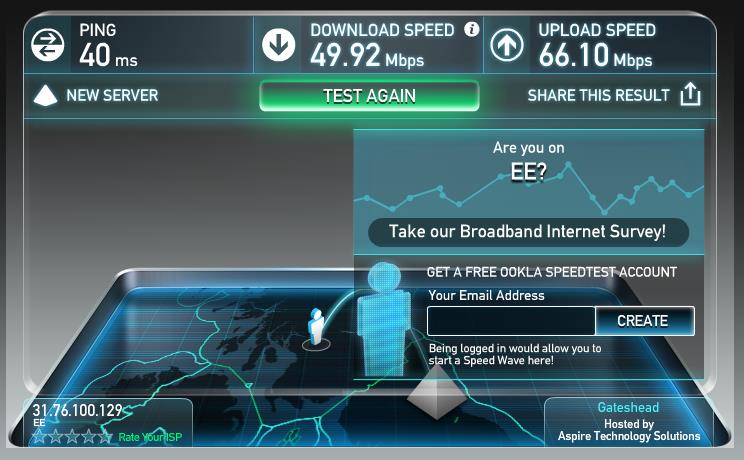 Oh BTEE, you could have nailed this but you chose not to.  Your 200GB plan for £60 is pricey but I’d pay it to get the connection and while it wasn’t what at all I’d hoped, it was decent.  Like a moderate land connection but with stunning upload speeds.  God this sim is made for taking to a show by journalists and uploading huge amounts of video.  It has soooooo much potential.  But….. BTEE true to form has opted to force you to buy a router, that while is fine and does the job the fact is I don’t want it.  I want the 200GB but they won’t sell me it unless I buy that router.  For short term use, which is what I want it makes it wildly expensive, first month makes for £160 a month, 2 makes it £110 a month averaged.  For that you need to be off the charts fast, fast like in one of your demos and then I could live with it (even if my wallet is furious about it) but your speeds while nice, did not blow me away.  The fact you then won’t include some extra antenna to boost the signal and whatnot is just a slap in the face to customers.  I see the market for this as technerds who need a short term internet fix while they await for Openreach to push a button or to those who Openreach has told to F themselves as they live somewhere Openreach doesn’t like.  It would seem that for EE some bits are more equal than others and so if you want 200GB of allowance you must buy the box or no 200GB plan for you. 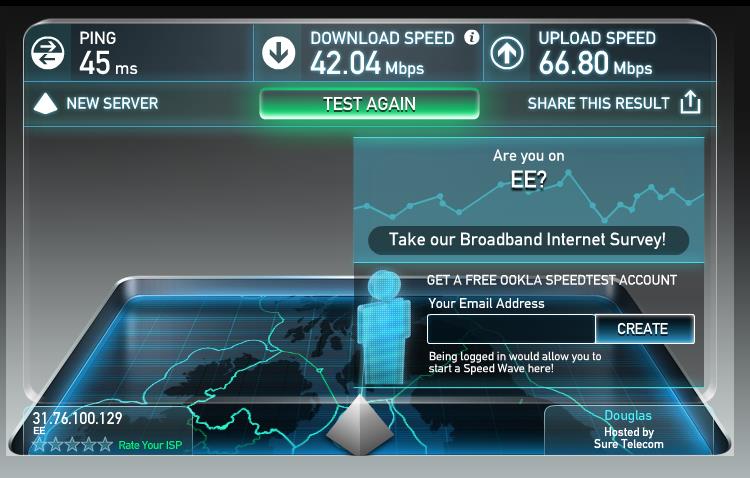 So, in short, a great idea but EE have demanded such a steep price and imposed a device buying restriction to make it as unappealing as possible a proposition.  Yep it works pretty good for me right next to a mast but it is so expensive for short term use thanks to being made to buy a device you may not want.  Why is it networks don’t want to just sell you the data you want but insist on being a pimp for hardware manufacturers?  Sorry EE but this will be going back in the box and returned to you shortly.