adminPosted on September 21, 2016 Posted in Miscellanea — No Comments ↓ 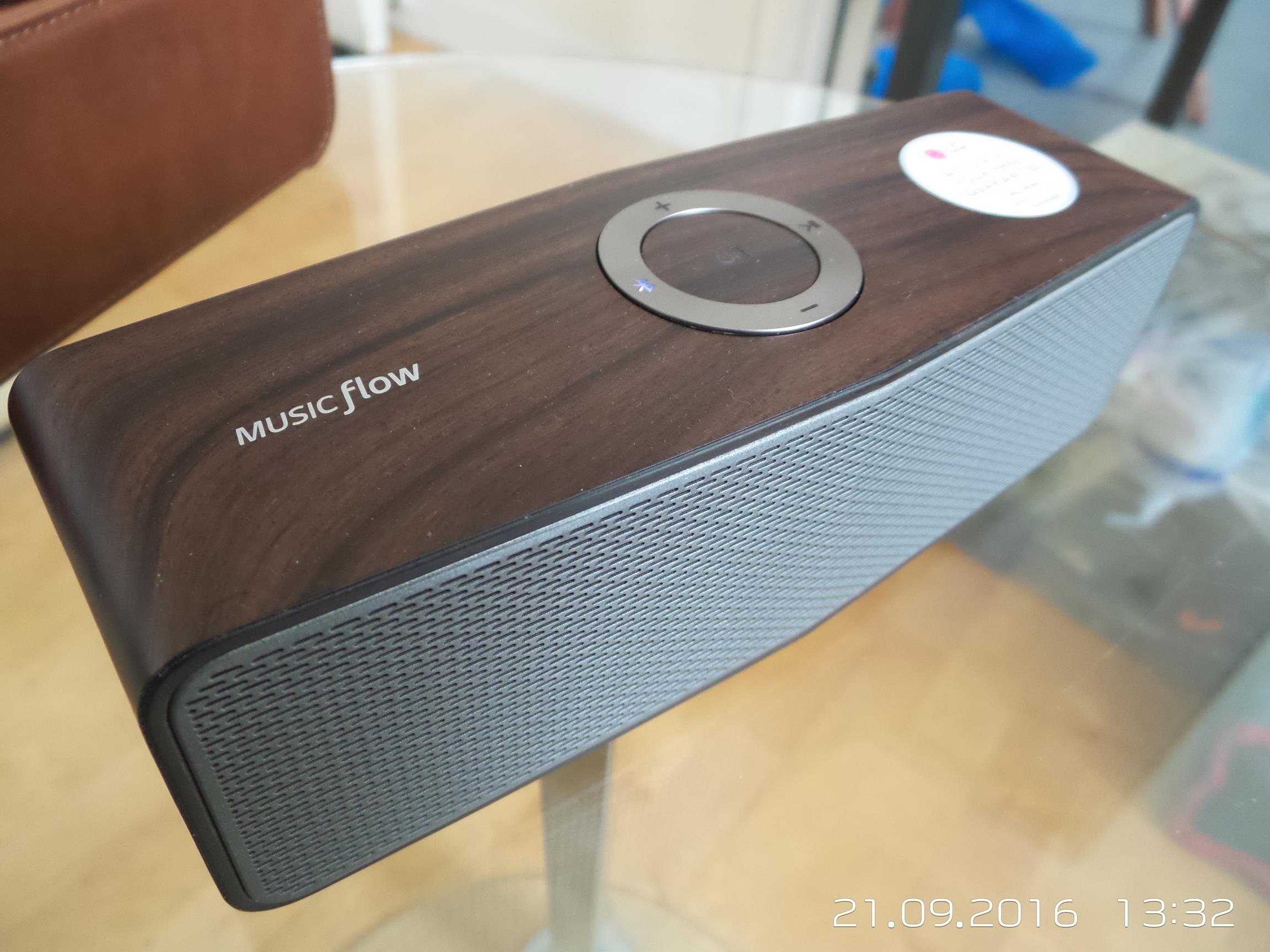 The LG P7 MUSICflow Bluetooth Speaker or for brevity, the LG P7 though didn’t they make a phone called that?  Well this is a speaker, a teeny tiny little speaker at that too, if your interested how it got on, read on. 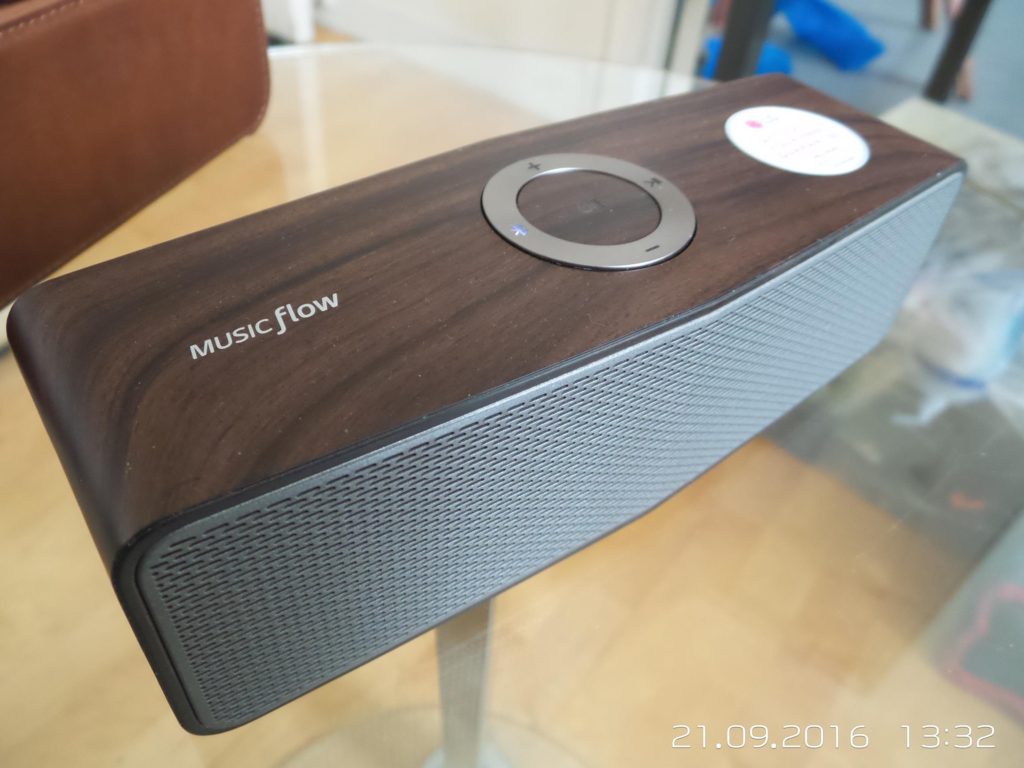 Thanks to LG UK for the loaner.

Oh this is a rather small box.  Rather heavy little box too, heavy so fingers crossed that means heavy drivers and not lead weights.   Opening it up and oh my, now that is a case!!!  I’m not sure how often any one actually carries these things about  but that is a seriously nice looking case, not sure how practical as its hard so doesn’t squish down.  When you put the thing in its really easy to accidently turn on.  Still, it looks mightily impressively nice.  The speaker itself looks rather nice too.  Though LG have stuck some hideous sticker on the thing.  If this was mine I’d be a little irked as it had better not leave sticky residue of bits of sticker behind.  It’s quite an attractive little object.

With it paired and playing, yeah that is a beastly bass output for its diminutive proportions.  It’s a little one notey but given its size it’s not like anything could output proper grown up bass.  Still, it’s fiercely having a good old try anyway.  Hmm the treble response though, I get why it would be muted but I think LG maybe have gone a little too far.  The off axis treble nosedives, hmm mids are kinda nice though.  Still I find myself looking at the price of this and while the silver version can be had for £66 this fancy wood with leather case one is £120, down from £150.  Seriously, LG thought they would sell these for £150, god damn the Yamaha thing I had in the other week you could buy for that.  Granted this is portable and has a battery but still, £150, eek.

There is a great big heap of bass and it’s all in one, great big heap.  Playing Owl City’s “Cave in” is, err, well, its sucks.  As the bass line in the track moves in and out of the P7’s bass output it goes from spitting out a big chunk of bass to falling off a cliff.  It isn’t noticeable so much in most songs but there, it’s very apparent.  In most tracks, particularly poppy, bouncy ones the bass is more likely in the P7’s range and it gives a good, hearty little thump.  It’s all a bit over bass centric for my tastes but I can’t escape that this would make the perfect tiny TV sound bar.  You know, for a caravan or something or maybe just paired to a tablet.  Something that can give a film with explosions a more convincing oomph.  For movies can get away with a thumpy, humpy bass, actually in many cases that is a positive boon.  In music though, I can’t help wanting more linearity and while I do find the little P7 to be very impressive for its size……. I find myself not entirely sure why you would need something this tiny.   If you do it’s great and spanks silly the little J&L BTS22 in audio quality, really this is the much more impressive device but its £30.  At £60 sure you get some hearty little thumps for such a diminutive thing.

Quantity wise, well that hump has a habit of dominating if you’re close and off axis.  I can’t say I’m super enthusiastic about its tonality.  The bass is just more domineering than it should.

Quite nice actually.  There is a good degree of warmth to the midrange and it offers a slightly thick presentation but I like it.  Again I’m drawn back to the idea of using this for TV shows and the tuning balance make voices sound more full and hearty than is common out of crappy TV speakers.  Voices sound rich and add a dash of depth.  It’s the opposite of what you would expect from a little speaker and clearly LG have tuning this to sound the opposite, making this take on the characteristics of a much larger speaker.  The mids, if you can get them isolated are quite pleasant, they could maybe do with a dash of air but they are a rich, warm rather full sounding vocal.  A little heavy in the presentation but I still quite like them.

Quantitatively there is a fair level but that bass heap comes back constantly and over shadows it.  It’s increasingly irksome.  If this was mine I’d have to be EQ’ing down that bass hump to give the mids a little more space and not have them constantly brow beaten.  It’s a shame as the detail levels despite its thickness is nice I think for a little thing.

Well, it’s not like me to say something is a too treble light but, well, it is.  If you sit perfectly on axis to the thing then the treble comes out a touch and lightens things.  However I wasn’t on axis most of the time.  Once more I find myself thinking this would be the most wonderful tiny speaker bar.  Playing back films and TV it works great.  It’s never very abundant but for films it works great.

For music, well I think LG have tried too hard to make the P7 sound beefy.  They have thought, treble will make it sound tinny and light so dialled it down so much.  The overall presentation feels very beefy, very hearty and up top, well there is very little.  For such a tiny little thing there could easy be more sparkle and there just isn’t.

On its own the little speaker is a little deceptive in its tone, it has the acoustic signature of a much bigger speaker but if you move about it is not a room filling sound.  It’s weighty but you quickly can tell it’s not big.  There is also quite the on / off axis difference too.  Works well if your directly in front, less so if not.

The output of the dinky little thing is crazy.  It can get really loud, it’s still a small sound but loud.  Its musical dynamics I mostly found curtailed by its inclination to hurl that bass hump at you.  Everything else was more reserved and thus I really never wanted to let it grow loud enough to stretch its legs.

It can make a loud noise, no question of that but it’s not room filling.  It’s still a small thing and while I would be most pleased with this as a little, caravan or glamping device to movie watch at night it’ll make a loud enough noise for you and a few friends to hear with no difficulty.

The claim is up to 10 hours.  Which is pretty long and in full honestly, the battery lasted longer than I did.  So if they are saying 10 hours then it’s given me no reason to think they are being misleading.  However I was never coming close to maxing its volume output which I’m sure must make an impact on its battery life.

Excellent.  As best as I can tell it’s as weighty as it sounds, the finish is blemish free and it certainly gives the impression of a quality little device.  I’m not sure I love the wood, I think wood effect but I can’t say it doesn’t feel well made, it’s very solid.

Well this has Bluetooth and it’s got an aux 3.5mm input.  So pretty standard fare right?  Well it’s also got some other abilities.  You can pair up two of these to make a stereo pair which I’m sure would help things feel bigger.  Then you can also apparently pair these up with certain LG TV’s and do some interesting things.  Firstly it says you can use them to output your TV audio to any room you’ve got one of these.  You know if you’re half watching something and getting ready to go out, hoovering, etc etc.  It also has a curious line on Amazon stating “Immerse yourself with a surround sound experience by pairing your P7’s to an LG TV (Connection only available on certain LG TVs).”  So does that mean you could buy 5 of these suckers and get a properly wireless surround sound set up?  I don’t have an LG TV and I’ve only one of these but like I said before, these would make for a great mini sound bar.

So usually in my experience these little speakers have phone call functionality, this doesn’t.  im rather surprised but oh well, no speaker phone use for this.

Well at its original price of £150, no, just no.  Frankly that price seems silly to me and I couldn’t recommend this at that price unless you really absolutely must have something this small yet want as good a sound quality as you can, to hell with the cost.  However it’s been out a while now and I see the silver one going for £66 on Amazon UK.  That makes this an entirely different proposition.   If you have an LG TV for example then their Music Flow might be of interest, the output too is not half bad.  It’s not the greatest for music but if you must have this size nothing will be great and this will offer you a more hearty sound than most.  Plus there is the fact that it’s portable, if you need something that can be run battery powered, it’s pretty good.

I think it’ll come as no surprise that the P7 and I are not a match made in heaven.  LG have in my opinion gone too far in trying to make the P7 as warm and rich sounding as possible.  The fact is no tiny speaker can do proper bass so this desperate attempt to make this itty bity thing spit out loads of bass causes issues.  I get that for many buyers a prolific bass output is what’s wanted and they won’t notice or mind if they did, that the bass is humpy.  For me, I believe that the device is capable enough given its size but I’m not convinced it’s been tuned for music.

The obvious thought I have is that it hasn’t been tuned for music.  The idea that you can pair this little thing with a sibling, pair it to your TV and I guess use these as surround speakers.  Now that is a whole different proposition, I think in that role these would excel not to mention that they are totally wireless too.  If you have the right TV that would be an excellent set up and for 60ish quid I could very easily recommend them for that role.  Time and again I thought what a nice mini sound bar these could make so I’d be perfectly happy using a handful of these in that role.

So would I / should you buy one?  Me, no. you maybe.  For the TV role I’d say go have a listen as I think they be perfect for that.  For music, well if you absolutely must have something this size, then for £66 I don’t know anything better than it.  Then with its present price, 60 odd quid isn’t bad.  The item itself is a quality little thing and the LG functionality stuff looks really interesting, not to mention pairing two to get a proper stereo pair that takes up almost zero space.  I just wish I’d been able to try two and to have tried its fancy TV surround abilities because I think it do great in that role.  However for just music, on its own, I’d suggest you look to something larger.