J&L Real, a somewhat confusingly named company and product, with the J&L-100 but hey what’s in a name?  The real question is how do these perform and if you interested in finding out, keep on reading. 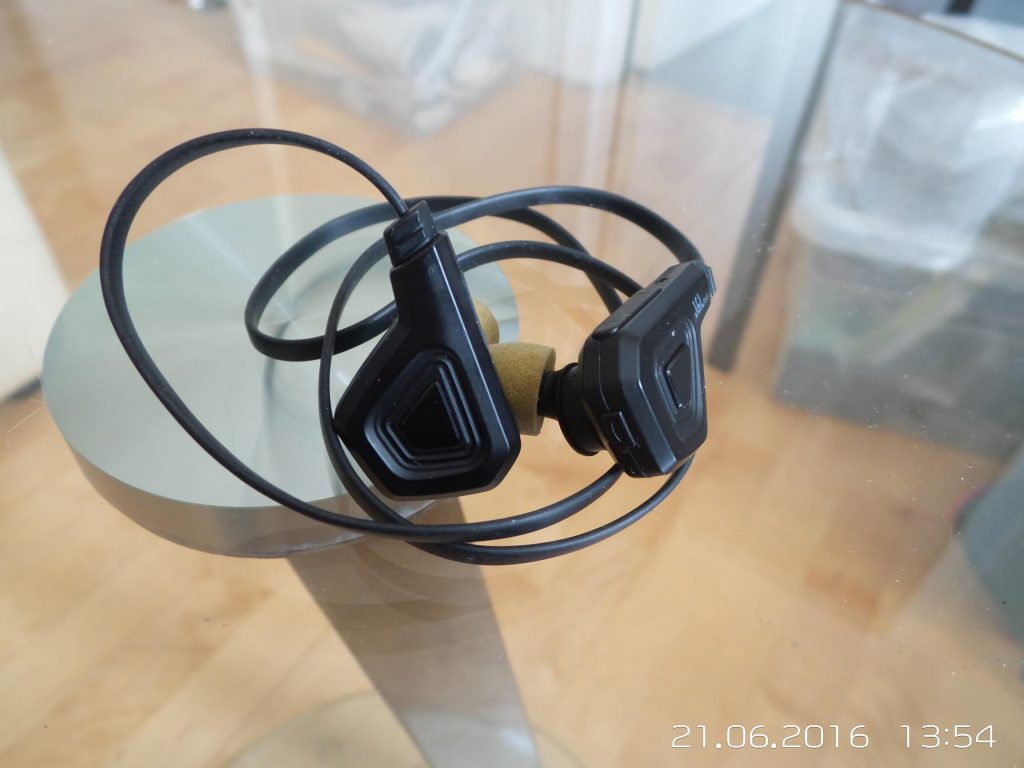 It’s a fairly compact box, ooh nice looking baggy thing for wrapping them up in.  Gosh, there is a fair assortment of tips and ear guides.  Oh and a micro USB cable in there too.  Hmm the buds have a flat cable between them, I so dislike flat cables but you know it’s only short so it won’t get in the way anyway.  Hmmm, they clearly are intended to be worn down, what are the odds that’ll be happening?  Still these ear guide things come off easily enough and so I’m sure I won’t have any issues wearing them up.

In the ears and so far so good, got them reversed and they fit pretty good.  It does seem to like the right ear better than the left but whatever.  They sound not bad once playing, hmm they need a bit of volume cranking, ahh there we go.  Hmm not bad, I am however just not feeling it, hmm maybe a little burning time will help

Big and hearty.  Very big and very hearty.  Very seriously big and hearty.  Hey, given their price point it’s not a shocker they were going to be bassy but these are very bassy, pushing towards Beats levels of bass.  It’s reasonably decent though, a bit expansive and a fair chunk of an air mover but while I can feel it on my sinuses its quality level is quite fine for the price.  Still my little ears a delicate little things and ooft, these are shifting a fair whack of air.  While it may not be to my tastes but these, with their bass line aggression and oomph would very much go with the likes of “Now That’s What I Call Running.”  A very assertive beat to keep you on your feet and moving forwards.  I could see it being the perfect gym companion for some, particularly those who want a highly prolific bass output.

They are alright.  Actually if you made all that bass go away I would like them very much.  They are a bit warm for sure and a bit viscous but I like them.  Very controlled and harmonious.  There just needs to be lots more of it, these are substantially behind that bass mountain next to them.  Quality and its warmth are both very pleasing to the ear, actually maybe a bit slow and rich for the most lively of tracks but hey, I still like them.  The only thing is they aren’t the most super detailed ever, pretty decent for the price but they do gloss over a bit of a black layer.  It offers them a bit of darkness, it darkens that mid-range background.

I just with that there was more of them, they really are most pleasing but that bass is so overshadowing.

I similar level to the mids, though they share a tonality to the mids, that same back, darkened background is there.  Though the detail level on the highs aren’t quite so great.  You see in the mids you can do that and it’s just a styling choice, you’ve thickened them up but in the highs if you can’t nail detail and you try to put an edge to notes, well you make your failings stand out a bit.  Find something with hard edged, splashy treble and it shows.  Its shows up what exactly they can’t do.  That’s not a “bad” not really unexpected as these are really cheap.  It’s just trying to emphasise that edge to give a greater impression of clarity and it exposes where it can’t quite get everything right.

The overall sizing is decent.  Like a good sized room but there is still an enclosure.  Placement and such is rather more nebulous and nothing fells very close in.  Even the bass does sound close in, it’s just gargantuanlly abundant.  Ahh so much bass, so much air moment.  Instrument placement is somewhat nebulous too.  It so all there, roughly in front of you, out of arms reach.

Despite their inclination to want to wear down I could pull of the inner ear guide things and then get them fitting just fine.  I really struggle to wear anything down these days as it just feels so unnatural and loose.  But they should be able to do both happily if you prefer down.

Great.  Well after a few hours my ears were getting in need of a break from all that air movement but otherwise physically their seating in my ears was fine.

They worked pretty good.  I was told I was a little distant sounding but hey, I was wearing them up so the mic was waaaaaaaaaaay up at my ear.  It worked though.  Like any one makes calls anyway.

For some reason they put a flat cable on them to join them.  I don’t like flat cables as they don’t bend in one direction.  It wasn’t a problem but a round would have been more flexible especially round the ears.

You get a micro USB cable, 3 pairs of ear tips and 3 pairs of inner ear guide things.  You also get a rather nice thick and softly padded baggy for them.

Pretty nice.  They are a bit plastic but then they are cheap and they are plastic, nothing bad per say but just meh.  Reasonable but I dunno I’m just not thinking ooh how nice they are.  Additionally they are IP54 certified so should be sweat and rain impervious.

Looks can be very subjective but I’m just not finding the love for the 100’s, they are alright I suppose but can’t say I’m especially fond of their visuals.

They isolate pretty well. They are reasonably closed and thus out and about, on a bus commute and you’d all be fine.  That goes too for a busy gym.  Maybe not Tube nor flight levels but better than nothing.

Very curiously they quote “3.5 hours when providing 100% volume, 5 hours for 80% volume and 6.5 hours for 60% volume”  which makes me suddenly think, why doesn’t everyone quote these figures like this???  Still that seemed reasonably truthful to me.  Truth be told my ears got worn out long before the battery did.

Pretty great.  It’s a testament to how absurdly cheap electronics have become that you can squeeze in a Bluetooth radio, DAC, amp and earphones into one tiny package all for US$28.  That’s about £19.  All that in there plus they sound pretty reasonable too.

If this had come out 10 years ago we would have all be in total awe of it, to think that the electronics inside have become so cheap is a marvel of engineering and of economics.  Taking the J&L-100 on its own merits it’s a grand little thing, great value for money and a tremendously bassy, decent quality sound.  It really is quite a marvel if you want that exceedingly bass heavy sound, to drag you round that last corner or last 15 min of the gym then bully for you.  That’s where it’s aimed at and that’s where it shines.

Now personally I would much prefer a less robust sound, these are powerful, heavy, seriously potent and I found it to be quite tiring.  It’s got a relentlessness to it, so much power, so much air movement, it’ll rattle your skull and punch you in the sinuses.  Me, well I’m a little bit delicate and it was all just a bit much for me.  It’s just too powerful and too relentless in its bass profusion.  Not bad, just not suited to me and what I would choose but I know more than one person who will love these and their bass response.

So should you/ would I buy one?  Me, no, I’m much too delicate for these.  The 100’s are monsters, wireless gym centric monsters.  It’s no accident their promotional images for them include people doing sporty type stuff.  That is where they are intended to be used, not some gentle Nora Jones, Diana Krall type listening.  It’s meant for gymtastic power beat tracks, it’s meant to fuel a workout to which my ears believe it to be highly suited to the task.