This time we’re looking at something from DUNU.  They declare that it stands for Delicate, Unique and Utmost.  You may have seem something like these before as visually they look just like the TITAN 1 and TITAN 3 (the 3 review is coming very shortly.)  So have a read and see what I have made of them. 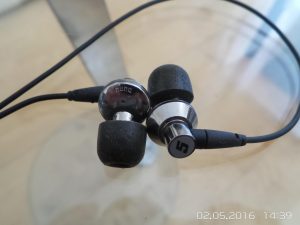 Thanks to DUNU for the sample.

So these and the 3, yeah they both arrived together and well, yeah yeah yeah they look the same.  They also look the same as the original Titan that I think is now called the Titan 1.  I know I’m skimming here but I just wrote the same thing for the Titan 3 review so the two of these are going to share much.  Not just looks but acoustically too and pretty much in every way imaginable.  Then where they differ in sound own can I not compare the two together?

This is going to get confusing I can see it right now.

So anyway, in the ears and as I suspected these would seem to be the bassy version.  So normally that would mean it’s the one ill like the best but I’m not super sure of that.  There is a little upper vocal spike that while a smidge lower a frequency than in the 3 makes them a little shouty at volume.  Okay so they’ve been in for about 6 min so don’t quote me on that.  Hmmm that bass is bigger, darker.  Something, hmm less airy maybe?  I can’t put my finger on it.  Anyway to the burn in machine with you.

Well by this stage I’ve discovered that the 3 and the 5 both share one trait in particular.  They are both more sensitive and thus it would seem tuned to better suit lesser sources.  This is most noticeable in the bass.  The 5 is it would seem the slightly V shaped one so the bass is more forceful.  It’s rather more aggressive and sizable beside the 1 and 3.  Weirdly though out of the big amps the mids and uppers came out more so the bass seemed comparatively less prominent.  Slap it with a phone (in this cane the P8) the the bass came barrelling out at you somewhat.  Its colder, more firm and less forgiving bass than was on the more mellow 3.  This is the once that’s more inclined to drama and exuberance.  Still its background is always evident that it came from an audiophile tuned product.  It’s more hearty and punchy than its siblings but it’s still not bass cannon levels.  So I’m not entirely sure who it’s aimed at.

For its price I can’t fault it but I’m really not sure what it’s trying to be.

They have a similar tonality to the 1 in being clear and highly explicit.  These though can get just the tiniest bit unruly when well powered and at volume in the upper mid-range.  They start wandering in the direction of ear stabbing sibilance.  If you really try to push them they walk right up to the line and dance on it at times.  Once more though I found out of a weaker sources they were slanted more towards the bottom end.  It’s like they were made with lesser devices in mind and tuned accordingly.  Either way the mids are really of a substantial quality.  Aside from its siblings there is very little out there with the nuanced capabilities the Titans have.  The 5 being more v shaped comparatively they aren’t especially prominent by audiophile standards.  Perhaps for a more typical consumer however they are going to feel potentially quite middy, the mids are very explicit in their presentation.  Being on the more dry and chilly side of the fence they are much less inclined to smoothly swoon and soar in the way the 1 is better suited to.  Superb clarity.

Flicking back and forth and looking at the spec sheets these are rated as being able to go up to 40kHz which is twice what is generally considered the upper “limit” of human hearing.  Even if you have the most exceptional ears and by that I mean you are Clark Kent or have four legs and bark you can’t come anywhere close to hearing things up that high.  The Titans therefore put the headroom to use by being delicate and so finessed that to get this detail level from a speaker would cost you a fortune.  My only reservation, only hesitation is that on the 5 they have been bumped up a bit.  They are masterly in their capabilities and for the money are jaw droppers but…… it’s just a little bit attention seeking.

I keep flicking back and forth and the V shaped flavour of the 5 is just that little bit over assertive for me.  Like an over eager child, its endearing at first and you don’t mind it, maybe even encourage it.  However by the 3rd hour you’re getting a little worn out and you want to tell it go shut up and sit the corner, quietly!!!  What saves them is their refinement levels.  There isn’t any brutality or harshness at all but it’s just that big bright.  It’s just that little bit too much.  I’m rather treble sensitive and it’s just too ever present for me.  Very entertaining in moderately small busts but not for all day.

Ahh a great big driver, an almost entirely open design means they have loads of scale, space and air to breath.  Of course the trade is hardly any isolation, there are in effect like itty bitty speakers near your ear drums.  So they have the sort of space a speaker can do but they isolate like a speaker too.  The thing is neither is by itself a god or a bad thing and more than sweet is better than savoury, they are different and your uses will dictate what suits you better.

Turning the things upside down and swapping the left and right, do that and your set.  Why these are shaped as they are and seemingly intended to be worn down, I do not have an idea.  I say don’t, wear them up otherwise they sit so shallow that wearing down means every move you make will tug at them and drive your ears crazy.

Worn up and left to right, great stuff.  Down however they constantly tugged and it irritated me significantly.  Still just wear them up and if you care about being the right way round you can just swap the cables on the buds as they are detachable.

Worn up and your golden.  Worn down the noise was very minimal but please, please do yourself a favour and don’t wear them down.

You know usually the standard story is they benefit from power, some a little, some a lot.  These however would have seemed to have been made with phones in mind.  They were at their most acoustically stable when played out of a phone.  It’s a little bit odd but of course with more power they got more resolving so it up to you.  These however have been made with being very easy to drive in mind. Very significantly more so than the Titan 1 was.

Well I often say that more isolation isn’t technically a “good” thing but…… for the things I usually want earphone for I do want outside noise locked out.  All the Titans all cant isolate for toffee.  That isn’t a “bad” thing but it really puts the kybosh on your using them on a bus for example or got forbid on the Tube or a flight. Sure if you want to use outside then go for it but these would only be my choice if I was maybe going for a quiet walk in a quiet park.  No one to disturb me and no others for me to disturb others with me music.

Everything.  Though they are seeming to be settling on this black case.  I really wish they would bring back the old UE lookalike metal one.  That was a cracking case.  The current one works but it’s boring, that metal one looked superb.  Otherwise you get about a million tips, 6.25 to 3.5mm adapter, a shirt clip and some inner ear guide things which I never use. Honestly aside from the return of the wonderful metal case they used to do you couldn’t want for more.

If their siblings dint exist, I’d be saying, wow, holy crap, there hasn’t been audio quality like this for this money since the RE-0 was price cut to US$100.  These spank everything is so many ways but the 5 is my least favourite of the three Titans we have to date.  It’s not bad, not even close but it’s just tuned a bit weird.  It’s not going to satisfy bass heads but it’s going to not be so endearing to purists.  Still it’s a great IEM, a cracking bundle and at a bargain price.

The TITAN 5 is great.  No, really, honestly it’s a great IEM.  However….. Its competition is the Titan 1 and the Titan 3 and they are better.  Okay “better” isn’t the right word but I’m hard pressed to see many taking the 5 of the three of them.  If you get a pair as a gift or something I’ve no doubt the recipient would adore them but I’ve heard all three.  The 3 is the more pleasant and enjoyable and the 1 is the flatter, more composed more toughly grown up of them.  The 5 is half trying to a wild child but still keeps its curfew and puts their dirty laundry in the linin basket.  They want to be rebels and they skirt in that direction but when push comes to shove they haven’t got it in them to be bad boys.  A little V shaped a sound signature they may be but it’s a seriously shallow V.

If the 5 existed in isolation form its siblings, the 1 and 3, then it would be a bit more of a stand out product, its airiness and quality levels are fantastical for the price.  Its grand open airiness that comes from being so open is like some road to Damascus revelation.  That sense of wow, these feel almost like speakers rather than earphones.  You know they are on their own talents very good.  However you can’t really forget about the 1 and 3 and while there must be someone that prefers the tuning on the 5…… it’s not me and I’m a little at a loss to see who that could be.  If you want a V shaped drama beast there are more dramatically V shaped offerings out there.  This is so comparatively mildly slanted.  Sure they are highly skilled and nuanced but I can’t help preferring the tuning of both the 1 and the 3.

So, should you buy a pair?  Well I wouldn’t.  It’s not they don’t deserve your money they are incredibly good if you take them in isolation but the issue these is they don’t exist ionisation.  The fact is I prefer their siblings in every case.  These are super detailed for the price and amazingly open sounding not to mention freakishly resolving.  But…… so are the 1 and 3 and I found them both to be the more enjoyable in every scenario.  However if you want that level of clarity, openness but with a bit of a V shaped, boosted bass and boosted uppers then sure take these.  They really are a magnificent offering and I want to say wonderful things but I can’t stop find the 1 and 3 to be the ones to really go for.