adminPosted on August 18, 2016 Posted in Headphone Reviews — No Comments ↓ 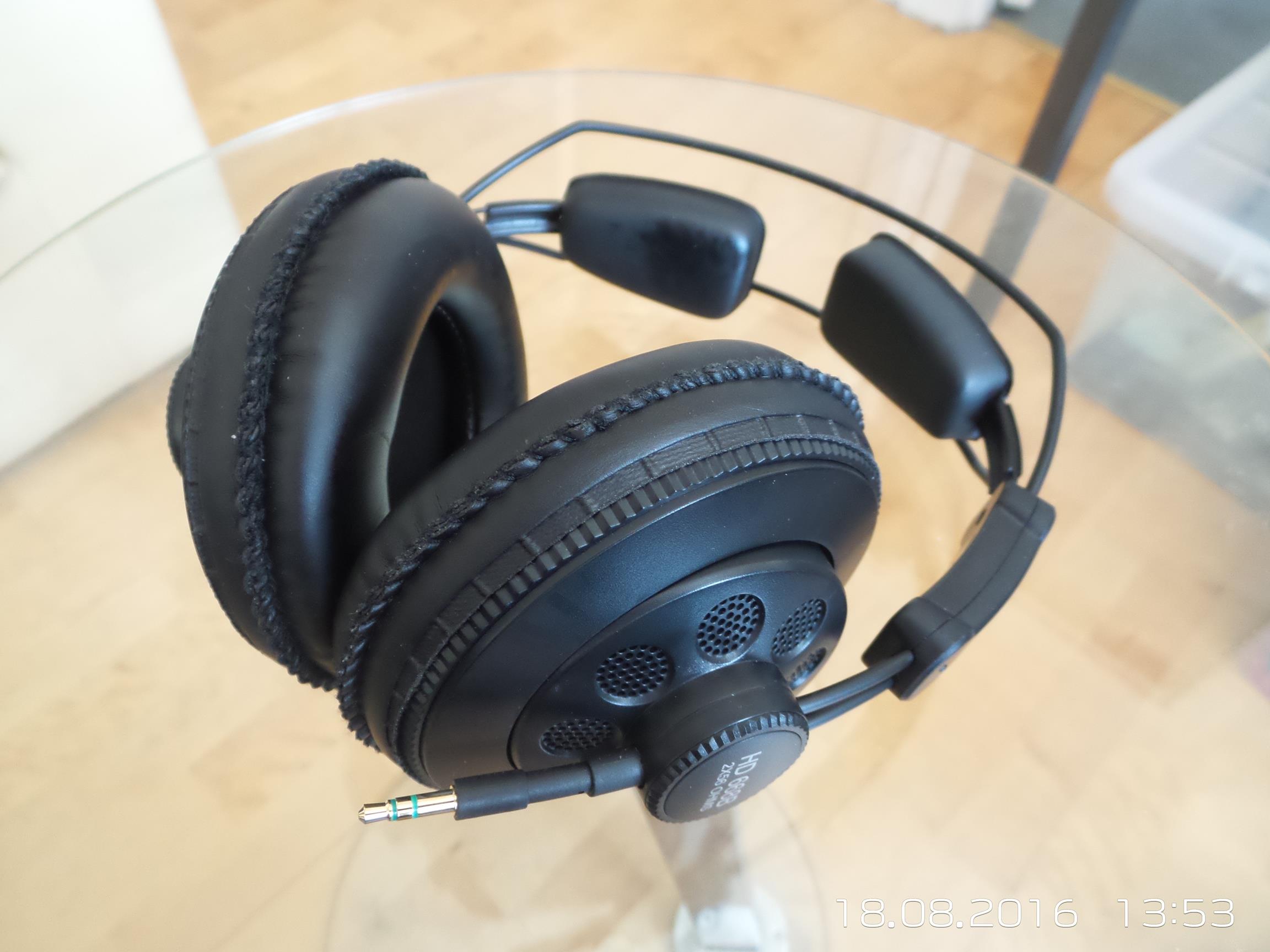 The Superlux HD668B Headphone yeah another Superlux and without giving it away, damn they are on a roll.  If you want to know details, read on. 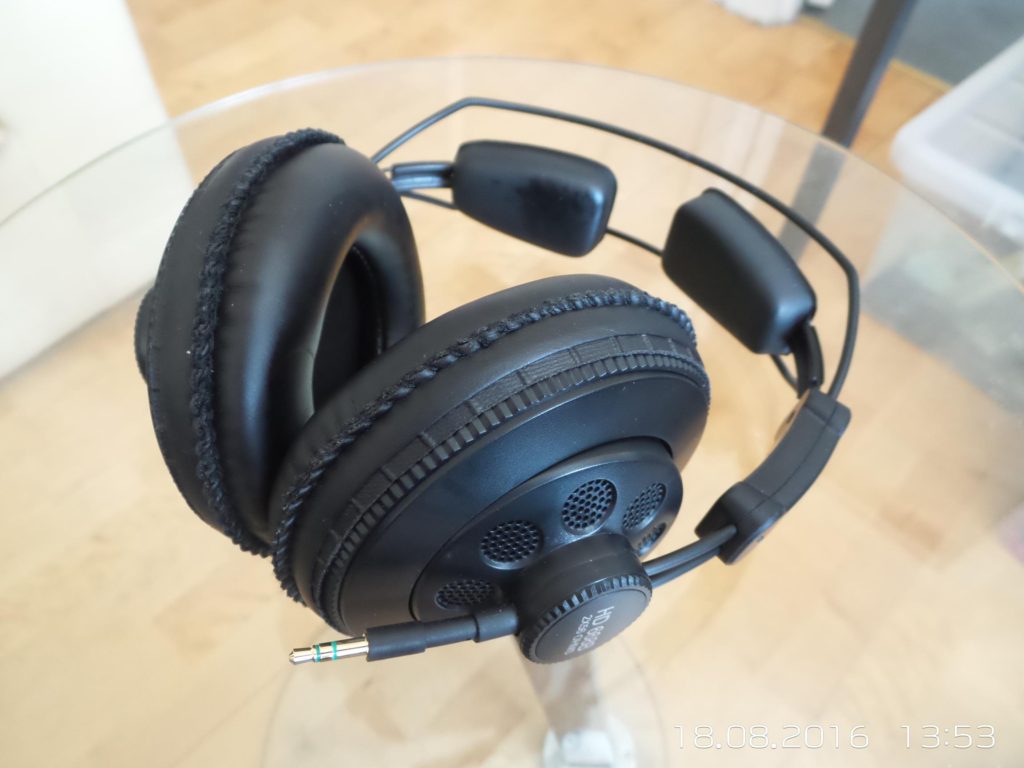 Thanks to GearBest for the sample.

The last two Superlux’s I’ve heard were both startlingly good for the money, thus I’ve got high hopes for this one.  I am worried thot I may be expecting too much and that if its isn’t as crazy good for the money I may be slightly disappointed.  So the box, hmm it’s different but still as weirdly neatly put together inside.  After grappling them out of the packaging it’s still a pretty good bundle.  Two cables is nice, adapter and baggy thing too.  No extra pads this time however.  Hmm, the headrest thingys aren’t quite even.  That probably won’t matter but visually I don’t love that, a little application of might bend it but err, yeah I don’t feel all that comfortable doing that.  These are in the hand clearly plasticy and a cheap product.  Mind you the last Superlux’s were the same. Hmm.  On the ears.

Oh, goodness, these are pretty damn good.  Great control in the bass, super nice clarity to them.  Hmm that treble might be a little over abundant for me.  In acoustic tracks these are really damn bloody good.  Mids a touch breathy but seriously excellent for the price.  Why are Superlux getting these drivers from?   Hmm there is a fair amount of clamping going on here.  These are super interesting.  Burn in time.

The bass is quite talented, really very talented and tuneful.  It can even rise up when called to give a reasonably bassy presentation.  “Your Father And I” rips into a decent bass line, good and hearty bass too.  Now it should maybe be a touch more but it’s a good solid bass presentation.  The bass quantity is really more about the relative abundance of treble in the track.  From what I’ve seen others comment on is that it’s relatively bass light and on the whole I’d disagree with that assessment.  There isn’t a lack of bass.  There is the exactly right amount called for in the song.  Okay so it maybe can’t cling on all the way down to the very bottom but you can’t forget that this is a 20 quid, delivered, headphone.  Seriously how the F are they managing that?  For the price it’s amazingly cleanly delivered bass.  Perhaps it’s too clean for those paying this price, cheap things normally have far more bloom and flab to them which serves to make the bass sound fuller, larger and these don’t.  These are clean and nimble all the way and in a way that you really just don’t expect form an el cheapo.  I really can see why they are labelled “Professional Studio Standard Headphones”  even if they are too much in the uppers for that really.

In terms of raw quantity, these can produce a bit but that’s so long as there isn’t lots of treble.  At this level of cuttingly clean the treble is what stands forth.  The bass just isn’t assertive enough to roar out at you.  In eclectic pop tracks where things are all over the place the bass stays too clean and articulate.  I can see why some would feel the need for a little bass boost button happening.

Wow they are really impressive.  Once more I find myself a little bit in awe, seriously at 20 quid these things are F*ing crazy, sure the build is a bit janky but holy crap they are good sounding.  The vocal detail they can rip out of a song is just superb for this price.  I can sooooo see why this is called studio whatever.  They are bit on the cool, dry, open flavoured but the clarity they offer is just fantastic.   Perhaps not the most welcoming nor soothing vocals.  These aren’t something you’ll sit with a scotch and melt into, they can’t really do mellow.  Even Erasures “Piano Song” from their Union Street album, a song that is gloriously rich vocally.  The HD668 is just that bit cold, sterile, dare I say lifeless?  Well maybe not lifeless but there isn’t that heart, the emotive warmth to the song that it should have.  It, well, it’s just is just a bit dead inside.

The clarity we have here is superlative in the extreme.  There is just gobs and gobs of detail, all very cleanly rendered, very explicit in its presentation.  Its quantity too is very good, a sliver a head of the bass.  Male and girly vocals alike are both superbly rendered.  Still with that hint of lifelessness and that hint nudged into a dry direction.  Still the take away is that the detail and nuance is staggering for the price, just crazy, crazy stuff.  This maybe the root of any disliking they receive.  This sort of sound signature and clarity is not what you expect at this price and thus like when someone tries their first BA IEM.  They can be quite a shock as it’s so unlike anything previously encountered.

The quality, yeah it’s superb, really stupidly impressive.  The detail it wants to spit out is wonderful.  It’s very forthright and explicit a presentation.  Now for me and my treble sensitive ears, yeah these got a little tiring because it can be a little relentless.  There is a lot of treble and it likes to hurl it at you.  Cleanly cutting edge and all.  In tracks where the treble is beautifully rendered, subtle, mesmerizingly delicate this is fantastic.  Seriously, you fire up some audiophile quality recordings and these sound amazingly good.  However, what are the odds that’s what you’ll be listening to from 20 quid headphones?  The trouble is most modern music is dynamically compressed to hell, poorly recorded, poorly mastered, all in the expectation your listening to it on crap equipment.  Certain, yeah looking at you Gaga, seem to deliberately harshen the treble edge to come through more noticeably on really bad setups.  On these, argh!!!! Make it stop!!!  Lady Gaga’s “The Fame” the opening seconds are brutal, brutal on the ear with these.  I don’t especially blame the HD668B’s it’s not their fault but their inclination to hurl out the treble makes for a terrible matching.

I don’t really know how much I can fault the 668’s for their being too explicit but as a monitor, if you’re using for superbly recorded pieces they work so well.  However if you’re working with sush good quality stuff are you buying 20 quid headphones?  The treble can be dazzling, amazing and dazzlingly intense which can be a good or a bad thing.

Really rather large.  These are big open cans.  I see them referred to as semi open but they are mostly open.  Not the most grand of presentations but their openness and their prominent upper ranges give a goodly airy feel.  Instrument separation and placement are more so so.   I have no problems with that as it gives an overall nicely integrated sound.

They do clamp rather a bit but with the big pads they didn’t rest on my ears.  They were relatively comfy to wear for hours.  The treble though on my ears was a touch tiring more so than the pads.

Great.  They use a male socket dangling from the cans like all Superlux’s I’ve seen.  Then you get two extension cables, a normal length and a long one.  You could also use any 3.5mm extension cable if you wanted so replacement so should be super easy to find.  The cable itself is fine, nothing fancy.

Yeah, semi-open means they isolate practically nothing.  I would say these are for indoor use only and not with others around unless you want to piss them off.

Well, err, yeah, they aren’t the nicest build eve ever seen.  They look and feel pretty cheap and plasticy.  Of course they are stupidly cheap and they are plastic so I don’t really mind.  They feel solid enough but fancy these are not.

Well, err yeah these are really much in the way of lookers.  They don’t look bad exactly but I’m not looking at them and thinking ooh pretty.

So these are 2x56ohms.  That’s what they have on their side so I’m not exactly sure what they mean.  But in any case these are easy enough for your phone to make loud.  However these want amped.  They are very, very much improved by throwing power at them.  The balance shifts a bit from the bass towards the treble region but with a big amp powering them they very noticeably improve in quality and detail.  The slight negative is that they shift to the bright.  So it’s a bit of a double edged deal, still I’d throw power at them if you can, perhaps just aim for something warm.  I should note though that even out of the lowly Nexus 5 they still sounded extremely good for the price.

Great.  A baggy, two cables, a 6.25 to 3.5mm adapter and a little clip to fasten it together.  Really cannot fault the bundle.

Stupid good.  This is the third Superlux I’ve played with and they are really belting them out of the park.  These are crazy, right now these are on sale for just under the 681 and yet these are actually even better!!!  (Okay I know they are sale atm but still.)  Even at their normal price they are crazy, super stupidly good value.  Sure the build isn’t the world’s best and they are not very good looking up close but if all you care about is the audio quality, I don’t know of anything else this good at this price.  Dazzlingly good value.

It is rather reaching the point where I’m getting annoyed. I feel like all I ever do is heap praise on things and while I believe when I do its deserved I worry that it looks like I’m just saying everything is great.  These though, well it’s just getting ridiculous.  These are freakishly good, just like the other two Superlux’s I’ve tried.  These are the best of the three though, the detail level these can extract is just silly.  These are 20 quid (US$26) delivered yet they genuinely pull out so much detail and nuance it’s absurd.  Sure that treble is trying too hard and hurling a little too much at you it is such a minor flaw.  At the price these are I’m really not sure how to really complain about anything that doesn’t make me feel like I’m being petty.  They are just sooooooooo cheap.

Now the two issues that people may have with these are the build /looks and the treble.  The build, well they seem solid enough but these just look kinda janky.  That however could be a boon if you’re kitting out a school audio lab as these will have less theft appeal.  The other is that treble, the quality is good, it really is, it’s just so good for the price but…… these are so cheap and it just needs to calm itself  a touch.  If you’re happy to EQ it down a touch then you could be on to a really seriously excellent cheap little studio monitor if you’re just starting out or very budget restrained.

So would I / should you buy one?  Me hmm it bit treble happy for me, excellent or not.  For you?  Well yes frankly.  If you are trying to put a little home studio for your school band, church group, you know where you want to get something good and non-consumer flavoured but have got to count the pennies, this thing is nuts, just crazy awesome value for money.  Sure it’s a little over happy in the treble but its soooooooooooo cheap.  It’s not a perfect headphone but for the price it is horrifyingly good stuff.