adminPosted on October 4, 2016 Posted in Headphone Reviews — No Comments ↓ 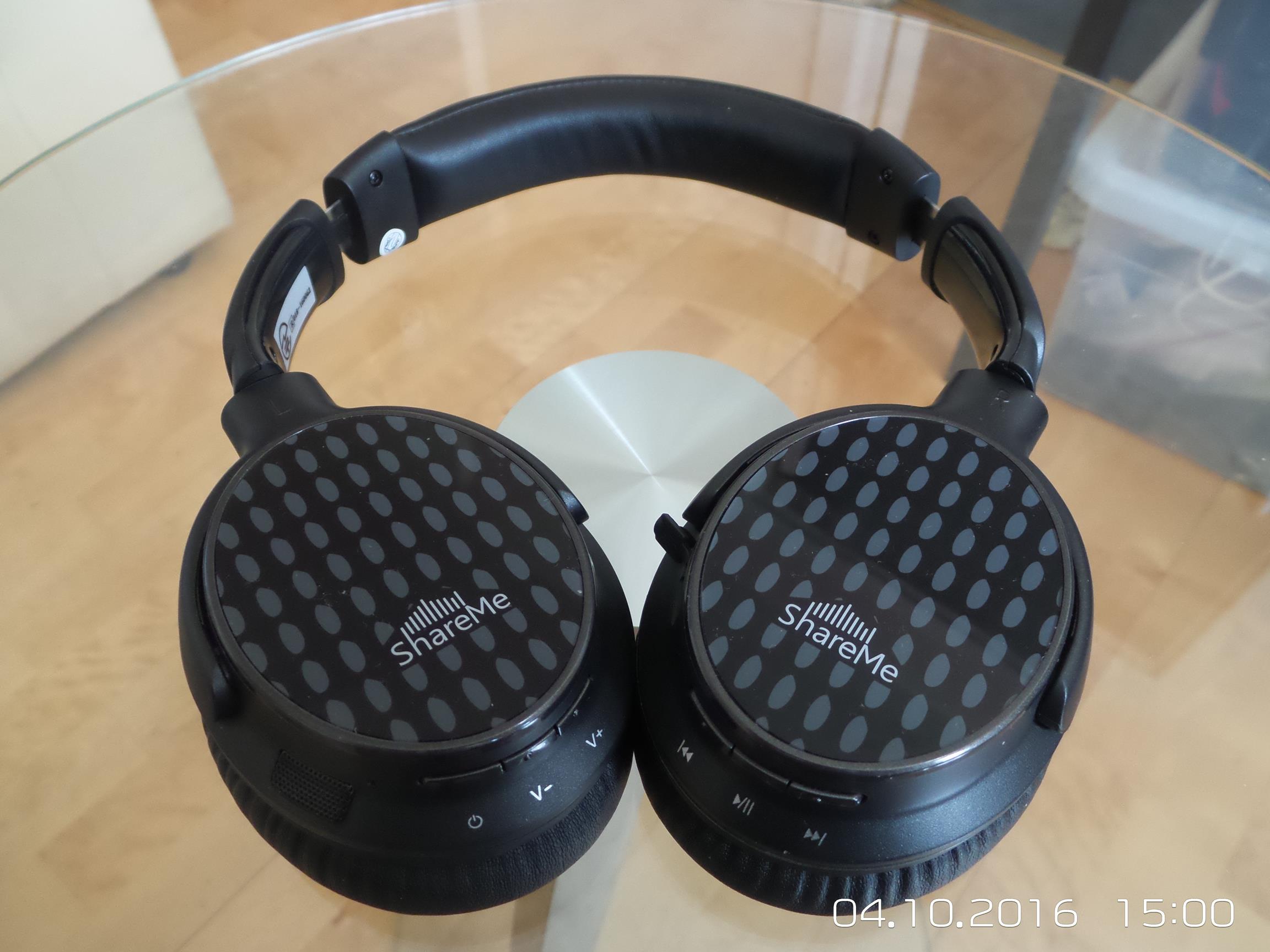 A curious product with an unusual sharing ability, of course the big question is how does it sound?

Thanks to Mixcder for the sample.

The box is straight forward enough.  Getting inside we’ve got the headphones and under them the manual, charging cable and, yes and, a 3.5 to 3.5 mm male cable.  Yes while these are Bluetooth headphones they can also be run via a cable like a normal pair.  I’m a big fan of that, while I wouldn’t be screwed if I picked them up and found them to be flat I could always grab something else.   However not everyone has that luxury so being able to plug in the cable, the world most ubiquitous and universally used connector that every audio device on the planet has with one notable exception.  Anyway, picking them up they feel nice in the hand, rather firm, all plastic but nice, quite light too.  I also notice that the buttons are separated.  Yey!!!  Volume controls on the other ear from the play/pause and track skip buttons.  I have when they are all so close together you can easily press the wrong one.

Sticking it on to charge I note that the micro USB charging flap is very snugly in place.  I had to grab a pair of tweezers to open the thing.    It’s neither a good or a bad thing but I’ve got no nails so it could become an issue, though I guess it keeps water out, are these rain resistant?  With a bit of a charge in I pair them and start the music playing.  Right away it’s a very warm, weighty sound.  Highly bass centric to the paint it’s rather stifling of the uppers and vocals.  Hmm maybe a little time will clear them up a bit otherwise these is going to be a highly bassy affair.  Burn in time.

Weighty, beefy, billowy and thick.  With a little time on them they did seems to open a touch in the mids but there is no two ways about it, these are bass centric.  It is very heavy bass and curiously when driven out of the Fiio E9 they gain a great degree of impact.  Driven over Bluetooth their bass is rather more expansive and soft, it’s unusual to see such a difference in a Bluetooth headphone.  Both have their merits, while I might give the more taught bass the quality award but it’s still so very big its impact gets wearing.  Its fun for the first minute or so but my delicate sinuses can feel it.  The pads may be lovely and soft but that bass isn’t.  Big, heavy, fat, crushing bass so much so I find myself turning them down.  Just so much power, soooooooooooo much weight behind them, so much warmth, so much richness like some triple chocolate cake with loads of that chocolate butter cream filling which is so sickly.  Woah these are too much for me and my acoustic pallet.

Quality wise there is a rounded heap of bass, its death does decline rather quickly and it does soften too.  The upper bass ranges to influence the mid-range too and thus there is a very bassy presentation all over.  It’s thick, heavy and relentless.

They are significantly warmed.  They are also rather eclipsed by that big old mountain of bass.  Vocals suffer a little in terms of clarity and detail, these aren’t aimed at the most subtle nor airy of vocals.  These are mainstream chart cannons not lyrical masterpieces.  They do that job perfectly well.  Detail junkies, though, well, no they just don’t.  That bass is ever present and over dominant to the point it is stifling and throws a big warm bassy fog between you and the vocals.  Chat topping stuff isn’t really negatively impacted but, but, well, it makes a me a little sad.

Looking on the right side these are epic party cannon beasts.  Somewhat cray cray with the bass boost and it’ll thumpity thump thump your way through the top 40.

See the mids.  That bass, it’s the start of the show and even in treble heavy songs the treble is clearly in that big shadow.  Of course the treble is highly non fatiguing and it is extremely kind to bad bit rates, poor sources and shoddy mastering.  Once more that gonna be charty top 40 stuff.  A lot of chart topping stuff is really badly produced and this is always most noticeable in the highs.  The ShareMe’s treble very comfortably glosses over those imperfections.  If you listen hard for the detail is there is a moderate amount but you’re not really meant to.  These are thumping bass machines.

The pods on these are really nice and soft.  They don’t really quite make their way around my ears so after a few hours it was nice to take them off but they were rather good on the whole.  They are very light on the head too.

Pretty effortless, on they went and I was fine.

The cable they came with is rather thin but it’s obviously replaceable so I don’t mind.  Plus there are primarily Bluetooth anyway.  One thing though is the cable hole is in a weird location, again though these are really Bluetooth headphones so I don’t mind.

The quote them at 20 hours and with a crazy 2000, yes two thousand hours standby.  Those are really quite high figures, I mean 20 hours over a week day spread is 4 hours a day, so that’s a two hour each way commute.  Not that I’d say do that, I’d charge every couple days but that’s a long time and they felt like they could run forever.

Well if you have tiny ears and you get an around the ear seal you’ll get better but I got a moderate seal.  Thus they didn’t isolate especially much.  I’d be probably fine using out and about but I’d probably skip being that guy on a bus.  Tube and flights I’d definitely skip.  However with music running you’ll need to remember to listen for traffic least you became a road kill statistic.

Rather nice.  It’s a mostly plastic affair but that means they are nicely light for wearing and otherwise they seem impeccable.  Nothing screams super high end or anything but I can’t detect any imperfections on them.  They feel like a nice quality item.

I’m not taken with the pattern on the outer ear cups but otherwise they are pretty much all black.  Nothing eye grabbing, nothing offensive, all in all they a little bland visually.

I rather like the noticeability of the mic, the little grill still it’s up near your ear.  Giving a quick call firstly I noticed that the ringing volume coming through to me was crazy loud.  Swiftly turning that down to a mere reasonable level and then the call was fine.  I was told I come through okay, there was a slight echo apparently but otherwise fine and perfectly useable.

Well while these are primarily Bluetooth headphones and thus they well be running off their own amp but…… you can cable them up too.  So what I noticed is that throwing more power at them and that bass hardens up.  While that is sort of technically “better” but their quantity is so significant that they were more ear friendly to me when running off their own power.  It’s unusual for there to be a difference but hey it is what it is.

You get a charging cable and an audio 3.5 to 3.5mm male to male cable.  That enables you to run them like a normal pair of headphones.  I always like that ability in Bluetooth stuff and so I greatly approve of its presence here.

Coming in a £40 they are pretty good value if you’re after this sort of highly bass heavy Bluetooth headphone.  Plus they also have the most unusual function of being able to pair another pair of them and share the music with a friend.  I’ve never seen that ability anywhere else so if that appeals then this is the headphone for you.

No prizes for guessing that these and I are not meant to last.  Woah these beasts are bassy, huge big, powerful, weighty, expansive, crushing oppressive bass.  If you want massive bass with the weight behind it to really drive it home then great.  Oh for me it’s a little too much, too weighty, too warmed and obfuscating.  This bass is the sort like that of a memory foam pillow and someone is beating you round the head with it.  Sure I can see the appeal, there is a certain funness to it, there is really, it’s got a certain bounce and beat to it.  However I’m not a teenager and I find it a bit oppressive, all that relentless bass.

These just have tons of bass, so much bass, all of the bass.

So should you buy a pair?  If you want some Bluetooth headphones with massive bass and if you like the idea of that musical sharing ability then these may be just what you’re looking for.  They have great battery life too, I mean you could likely get away with using these every day for your commute and only have to charge them once a week.  Then if they somehow run out you can just plug the cable in and boom you’re ready to go again.  They are really comfy too and are nicely made with very easy to use controls.  It’s a great product if you want its overwhelming bass presence.