adminPosted on November 18, 2016 Posted in Headphone Reviews — No Comments ↓ 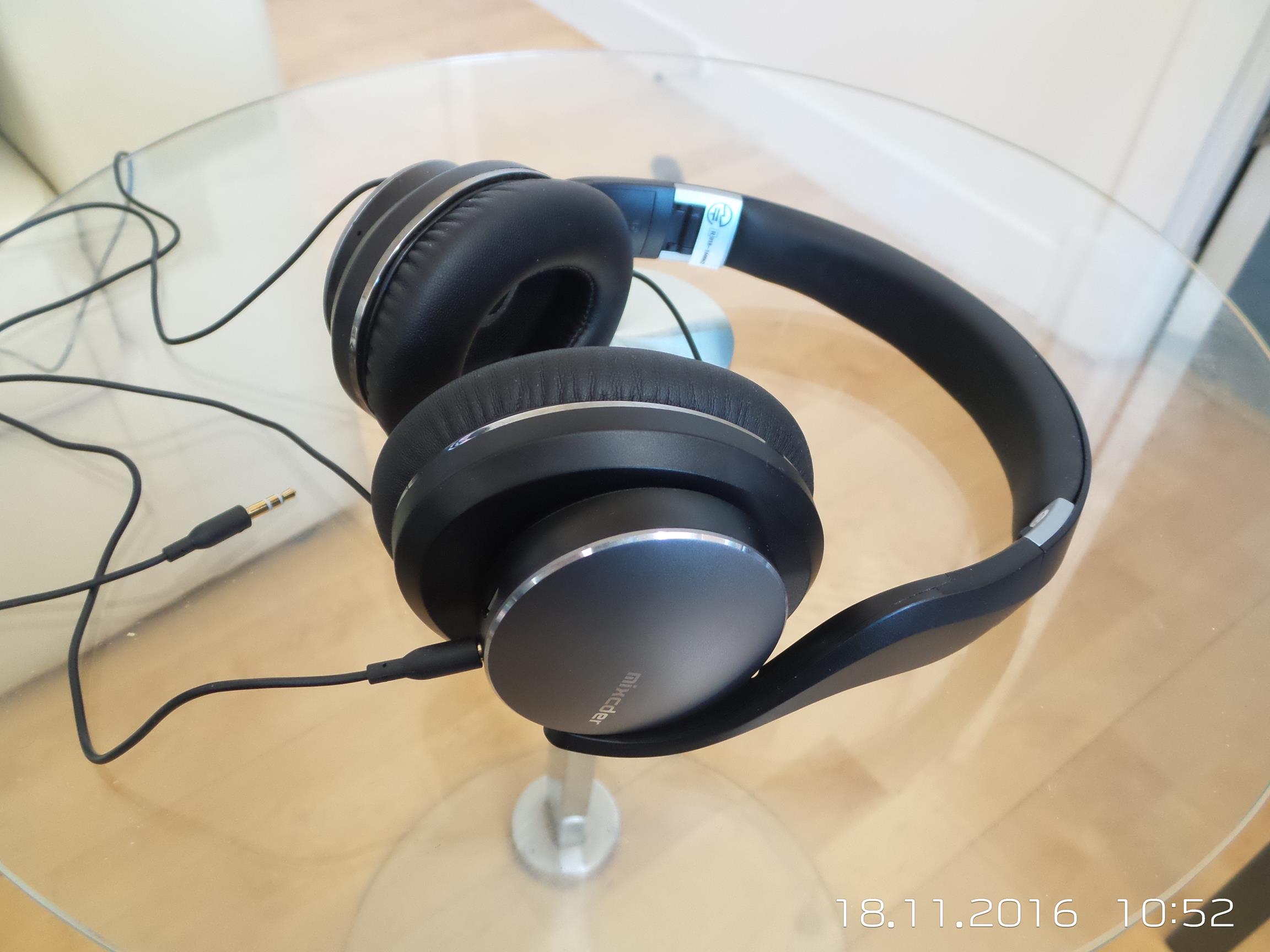 The Mixcder ShareMe 5 Bluetooth Headphone Review, another offering from Mixcder but this one getting its pretty on, sure they look good but how do they sound? 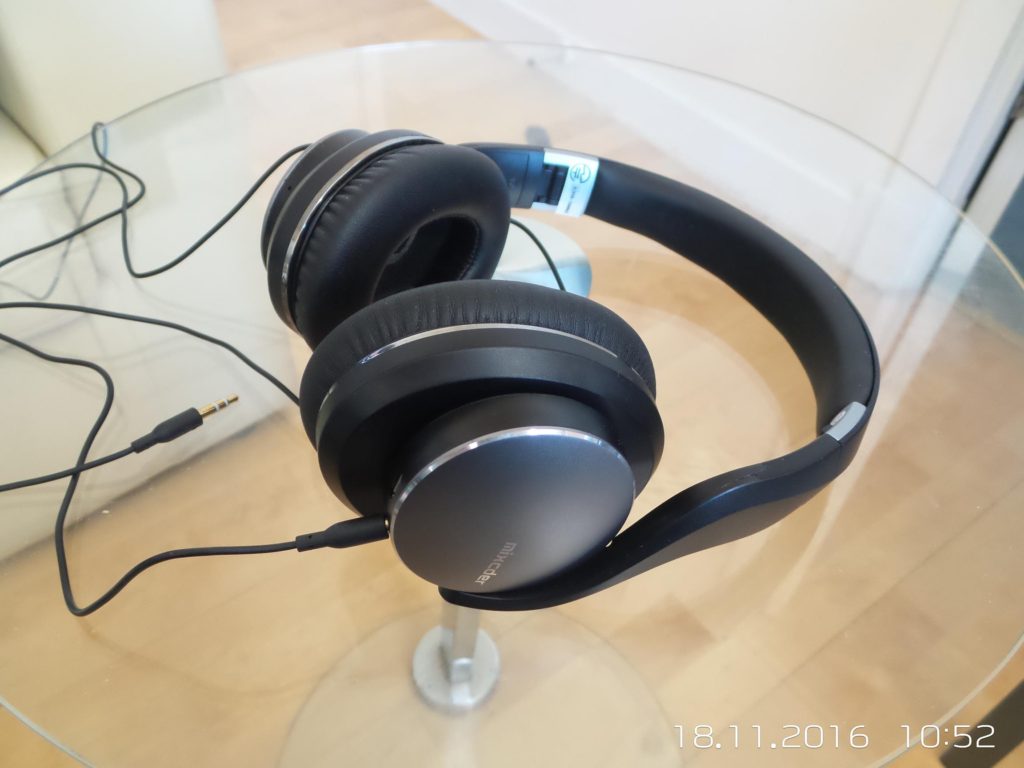 Thanks to Mixcder for the sample.

Okay so these are another in the ShareMe range so they have the same sharing functionality.  Though I still think it strange that you would want to share with someone your music, rather than just speak to the person but hey.  So the box, nothing super fancy, clean, simple and I do like that blue they use.  Inside it’s a simple affair too, the headphones the charging cable, a 3.5 to 3.5mm audio cable and the user manual.  Picking up the headphones they are instantly noticeably light.  They feel featherweight which I guess is handy if your wandering about the place with these on for a long time.  They look nice, I like that twisting curve attachment thingy.

Whipping out the cable and plugging them into something to have a play before putting them on to charge.  They are alright sounding, a bit slow, mellow, a bit warm and rich.    Rather full bodied in the low end.  It’s also a little subdued up top, an overall warm bassy feel to it.  Pleasant.

These aren’t too unlike the lows of their ShareMe Pro, these are a little more articulate but still the same over all tonality and flavour.  Warmly mellow, a bit heavy and a while a bit over bloomy very easy on the ear.  Much more inclined to be gently enveloping than to punch the bass out at you.  I kept gravitating to tracks such as Fiona Apples’s “Love Ridden” where the lows are gently sweeping, a light and lingering lower end sweeping back and forth over the ear.  Smooth, flowing gently about the senses.  It’s very nice and rather relaxing.  Faster paced, more typically mainstream bass they slightly softened and rose up in abundance to give you a big, solid oomph.  Not delicate and nuanced but a big grrrrr soft boxing glove punch.  There is an impact, a strong follow through of the bass line, subtle it is not.  It’s a goodly warm and pleasing rendition that I’d expect would play well to the mainstream crowds.

Rather in the same realm as the lows.  There is a richly mellow, warmed and softened presentation.  It’s really easy on the ear and is great at glossing over the little imperfections in some artists vocals.  It is nice, a little bit on the heavy for me.  It makes things a little bit more enveloped, more intimately close in.  Firing up some more delicate and airy vocals the 5 likes to add that warmth and it can be a little thick, sucking the air out of the room.  Still the warming and the mellow rounding it does, perfect pair up with a lot more mainstream pop artists.  They are more often concerned with their dance routines than they are in the vocal performances.  Which is fine as that’s what a lot of people want, the 5 add that beauty soft focus filter over little mishaps and rounds everything off.

Tonally however that thickness isn’t always wanted.  It’s nice and it’s a flavour that will be liked by many but I can’t help wanting just a little bit more clarity to proceedings.

The flavour that was elsewhere exists here too.  The treble is mellow, rich, gentle on the ear and gives a sumptuous presentation.  It’s super easy on the ear, even when terrible mastering and bad bit rates are used.  The 5 does its best to paper over those little mistakes to give you an overall more pleasing picture.  The down side to that warmth and smoothing is that you lack the fine detail retrieval.  I do find that I would rather they were more cleanly articulate up top but they have opted for a more general, mainstream pleasing style.  It’s not a mistake, it’s a choice and while its not I choice I’d make for me it is one that has a place in the market.  I dare say its tonal choices make it rather appealing a headphone to the majority of mainstream buyers.

Scale and power they can do with aplomb but the richness, that mellow nature does such the air out of things.  Light, airy, breathy there don’t really do.  Much more warm, intimate and smooth.

Great.  Their super lightweight means they don’t need to clamp like crazy.  They didn’t really entirely make it round my ears but I was happy wearing for hours at a time.

Great.  On they went with no trouble, no fiddling, easy stuff.

Well the included cable is a little thin.  If it were a permanent cable I might have a concern but as it’s likely they will never be used with a cable in the wild and even if you did break it (or more likely lose it) then you can replace it easily.

Okay hands up, they claim 14 hours and I lost track of the number of hours I got out of them.  They didn’t die quickly or anything so I’m going to tentatively say, 14 hours seems fair to me.  I also note that they have the standby time rated at 2000 hours.  That is just crazy, that’s over 83 days or nearly 3 months.  I can assure you I won’t be trying to test that claim.

Well they weren’t bad, they don’t have really high clamping force so I did notice that there was a fractional difference between my wearing glasses and not.  Not a big change but detectable.  That with them not entirely quite making all the way round my ears these are massive isolators.  Fine for normal, out and about use.  Probably okay for on a bus too if you don’t play really loud.  Tube and flights I’d skip though.  As ever with music playing they will be more than sufficient to obscure that 4 wheeled death machine hurtling towards you.  Eye’s need to be use near traffic.

Good.  They seem all very neat and tidy.  However they are plastic mostly and while that makes the super light, so comfy and light in clamping some will say that makes them feel not solid.  I wasn’t going to test them to destruction to find out.

I like them, nothing super fancy visually but that pleasant and simple little curved head band to cup attachment pleased me.  Mostly they are visually unexciting but pleasing.

One thing that was odd. Extremely odd.  The Bluetooth volume control on my Nexus 5 phone only seemed to work for the first three volume notches.  So off, up one notch where it played fairly quietly then up another notch and it was moderately loud.  Then every other notch did nothing.  I thought oh my phone must be playing up, it is a custom ROM on it so ill reboot the thing.  However the same thing.  I swapped over to the P8 and it all worked fine.  I will blame the phone for this but it’s the first time I’ve had this happen.  Making a call however was fine and the volume control in the call worked perfectly, so go figure.  The call itself was fine, it was the usual story, I was told I could be heard okay but I was a bit distant, a bit quiet.  That seems common when the mics are up by your ear.

Well there were some differences but they weren’t vast.  They did clean up a bit when getting more power and when it was from a cooler amp and DAC.  When just running over Bluetooth they were fine, eager to go loud and held on to that warmly rounded flavour.  Pleasing and while my personal tastes wanted them powered from a cold source, the application of more power in itself wasn’t vast.  So what I’m really saying is you can nudge them in a direction of your choice if you want to but don’t feel you have to.  They do just fine running of their own power.

You get a Spartan bundle. A micro USB cable for charging and a cable for normal wired use.  Frankly I would myself have sooner had a little baggy to keep them in over another Micro USB cable that I have 8 bajilion of.  Still it’s not bad really and a baggy is handy for me but that because I’m a crazy person with millions of headphones.

Pretty good, their sound I’m a little so so about because they are too warm for my tastes but I know it will be a crowd pleaser and they are pretty keenly priced.  Plus I really do like how they look.  Yes I know looks aren’t really that important but the clean lines and that curvature, that flows up round and over the headband gives it a simplicity, visually, yet shows real attention to detail.  They are so clean looking, yet modest and they just suit my own visual tastes.

Well the ShareMe 5 is a mixed bag.  I love the look of them, I really do, they are super light so love to use for extended periods.  They are Bluetooth and cabled if you want and work fine as a headset too.  It’s a good all-round bundle in an attractive package.  The audio though, well it’s a little too flavourful for me, it’s not bad in anyway but it’s a little too creamy, a little too syrupy for me.  I want things more clean and light and these are so sumptuously velvety.  As with any highly flavoured thing its either great and matches your own tastes or as in this case with me, it’s not what you love.

Now the 5 isn’t all frowny face from me.  Its tonal flavour is such that some creamy, buttery jazz on a cold winters evening, you all snuggled up inside with a roaring fire and generous helping of scotch in your hand, great.  All things have a time, a place, a pairing, a target and these abound with warm, lovely, smooth music.  Its rounds, smooths and warms everything.  To then go to the other end, pop charting stuff gets a warm glossing over with all the little erm, not quite perfect bits they often contain, just melt away.  These hide imperfections and give you more gently soft focused pleasing overall picture.

So would I / should you buy one?  Me, na it’s a little warm, nice but it’s just that bit too warm for me.  You, well do you want that warmth and smooth presentation?  If you do then sure, they come in a good looking package and sound pleasingly warm and rich.  Big hearty lows, lots of follow through in them.  Plus they are super light for wearing out and about, and with that low clamping force highly comfortable to wear.  It is a very flavoured product for sure but if it’s a flavour you want then it’s a highly sound choice.