adminPosted on November 15, 2016 Posted in Miscellanea — No Comments ↓ 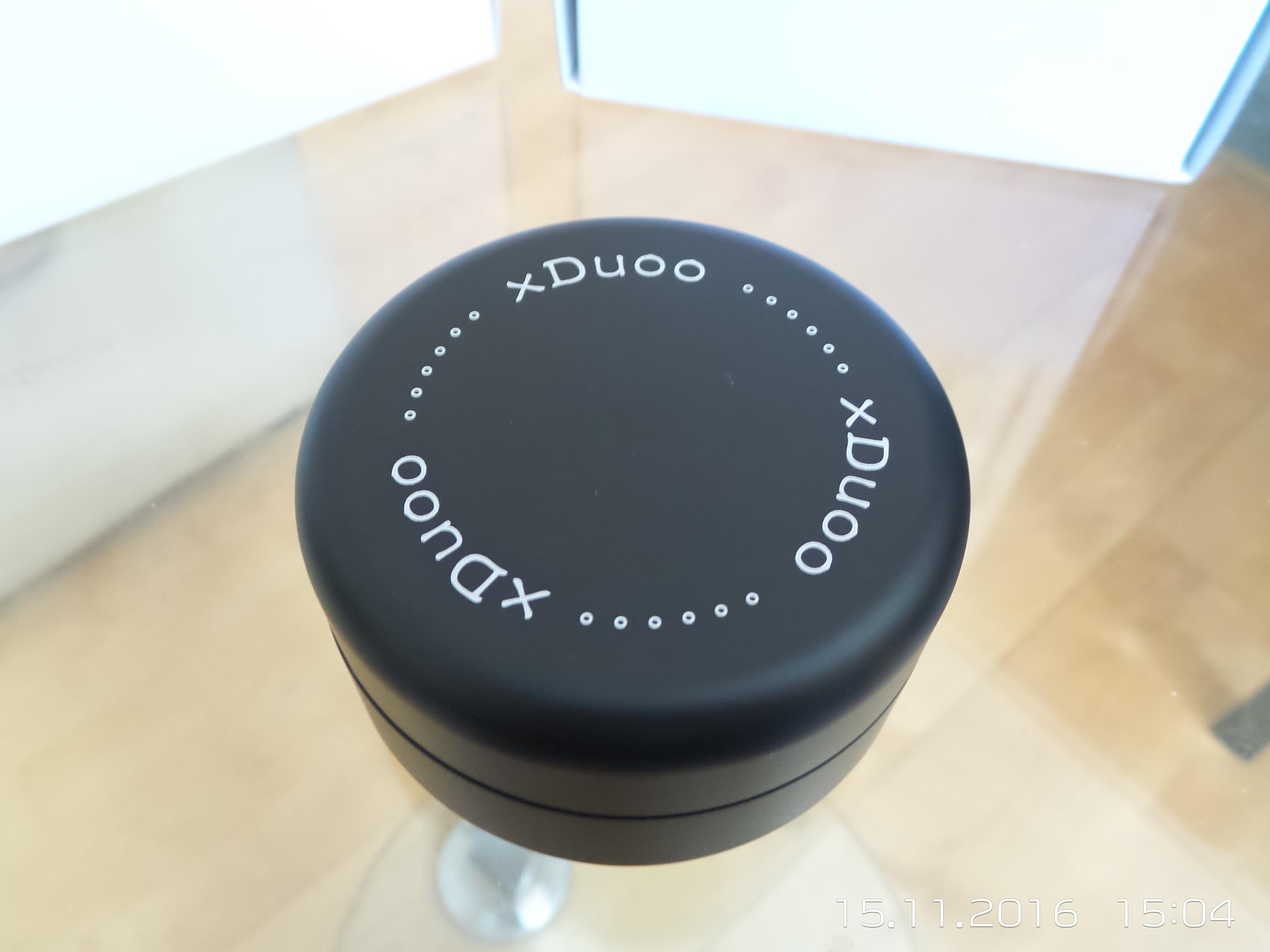 The xDuoo X-CAN Earphone Case Review, oh my if ever there was an earphone case, my word this is that case.

I’ve been looking at a few cases lately and when someone asked me about this one I thought, hmm sure I’ll take a look.  OMFG how much!!!  US$25 for a case, whoa that is a bit much is it not?  Hmm as I start to read about it, whoa, they state its waterproof, okay that’s not so exceptional but they also say fire proof!!!  No, seriously???  Fire proof, hmm well it is all metal so wouldn’t the inside get really hot and turn your lovely expensive IEM’s into a puddle anyway?  Also if my home burnt to the ground my earphones maybe aren’t that high up on my list.  Still it got me interested.

When it arrived, the box, because it comes in its own box, holy crap it has weight to it.  Mind you I did rather smirk a bit at its being called a can.  Opening the box the thing is weighty, okay this isn’t some little bitty thin sheet of metal, this thing is expletively solid.  Whoa good god, this thing is crazy, good god its insane!!! This thing is like something Le Creuset would sell you.  Note to self under no circumstanced does this go in a pocket with a phone in.  Trying to squeeze this with my fingers is pointless, even using all the effort my hands can muster can’t move anything.  I feel like I need to run off to a local university engineering dept. to stick it in a hydraulic press.  See just what it takes to crush it.   Seriously, this case I’m not sure you could break it even by taking a hammer to it.  I’m not trying it but this is super mega ultra-overkill.

This is bigger than most cases.  Not huge or anything (cough Ety, cough) but it’s big, deep and really I think while they say these are for earphones they are meant for customs.  Not only because it’s deep but due to it being expensive for a case, if you’ve just spent a grand on some customs you want to take care of them and this would do that.  I can’t read most of the box but 181g and 82mm, 43mm, 72mm and 42mm must be its dimensions.  Though which dimension is what I can really say my own attempt with a ruler says it’s just over 8cm in diameter and nearly 4.5cm high.  So for a case it is a little bigger than most.

The inside is coated in what they call ”high quality soft velvet” and while I’m not thinking it’s that different from any other inside velvety stuff, it’s nice.  Not anything special but it works, gives a soft non scratchy surface for putting your precious and expensive babies in.  Size wise there is a big neon sign in my head saying “Customs.”  Pretty much anything should fit in their fine.

Crazy town epic.  Destroying one of these would take some serious and deliberate action.  I cannot conceive of a normal event that could occur that would destroy them and I’m including a car crash.  Unless a train landed on the car with these inside I just don’t see how you could destroy it.  Seriously, if anyone out there  has access to a hydraulic press please buy one and see how much this can take before its gets crushed.  I may have thought the Compressive Case I had a while back was tough but this is absurd.  Could someone shoot one of these with a rifle and see if it even dents it?  Honestly this thing is so overkill, just off the charts overkill.  I cannot possibly hope to express how much overkill this is.  If your earphones are in these they will be safe, no matter what short a nuclear war breaking out.  Oh or maybe if you’re in the army, erm and stuff getting run over by tanks is a big problem?

Well for a case it is expensive.  It is, that’s just a fact and it is such an overkill case you really do not need this much protection, it’s just crazy.  However if you have just spent a small fortune on some customs I really cannot think of any better protection than buying one of these.  It’s crazy for sure but if you just spent over a grand what’s 25 bucks to ensure no harm comes to them?  It is expensive for a case but the protection, the toughness of it is epic.

Lol, this thing is so crazy.  It’s a case but my god it’s indestructible.  Seriously I really want to put one of these in a hydraulic press and see what it can take.  Come on xDuoo that is YouTube gold right there, one of these meets machine gun, run it over with a tank.  This is less earphone case but more like a case for smuggling diamonds.  I realise you’ll think I’m getting a little carried away but I’m not, I promise, this is the most lunatic overkill insanity for a case I’ve ever seen.  Lol, seriously it’s just nuts how solid this feels.

So would I / should you buy one?  Well for me, maybe not because it is a little expensive for a case and I just do not come close to needing this level of protection.  I baby things, carefully so for me an ordinary case meets my needs.  This, this is…… well I can’t imagine what you could be doing that need this degree of protection that you won’t be dead as a result of.  However life is, for likely anyone reading this, not so much about “needs” but our wants.  If you just paid loads for a pair of custom earphones and you want to get your new precious babies the best protection that money can buy, well that would be the X-CAN.  Its crazy town lunacy and epically indestructible insanity, I just love the madness of it.