adminPosted on November 15, 2016 Posted in IEM Reviews — No Comments ↓ 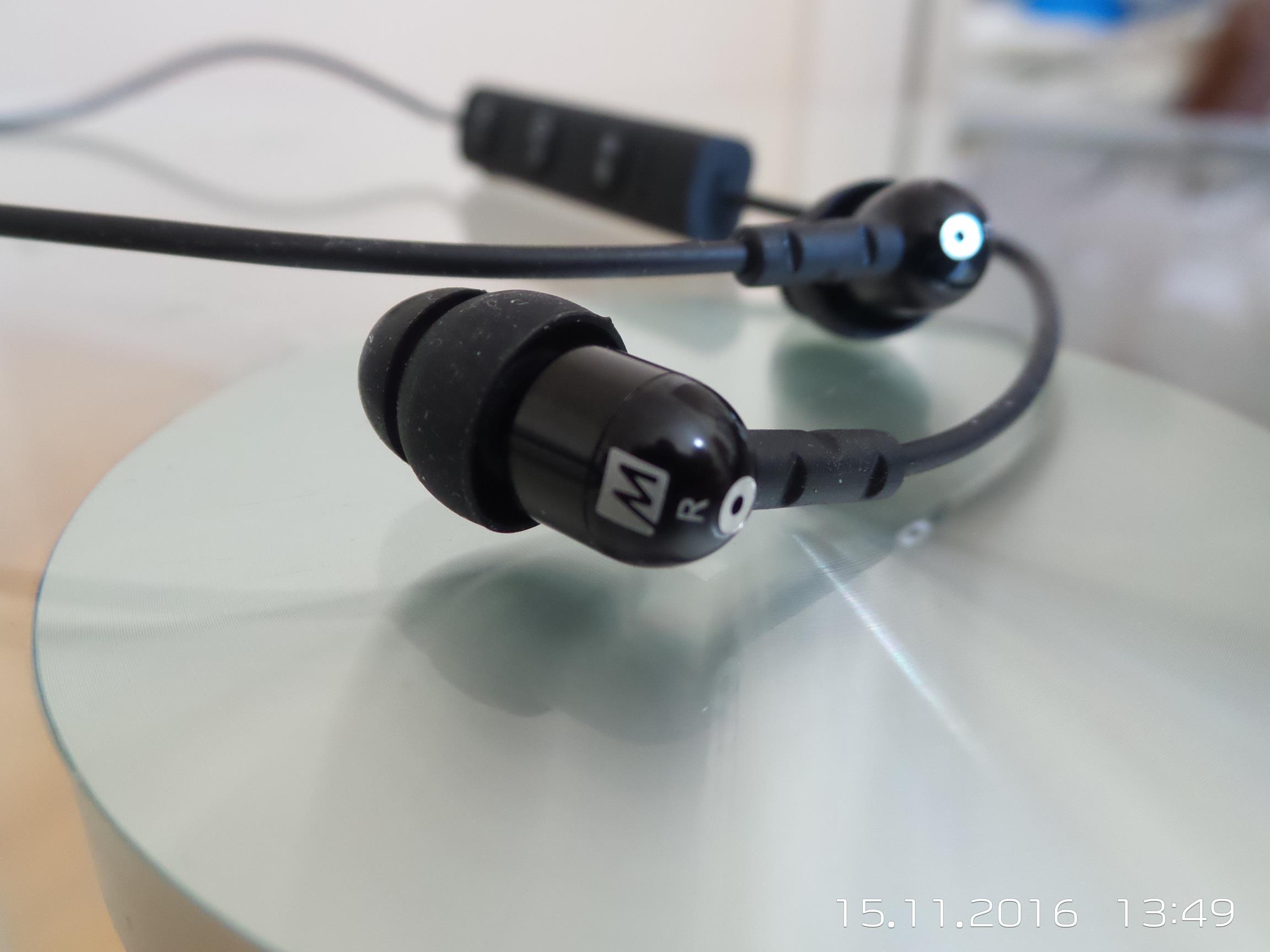 The MEE audio M9B Bluetooth Earphone Review, if anyone remembers back to the old M9, well its had an upgrade.  Find out how it got on. 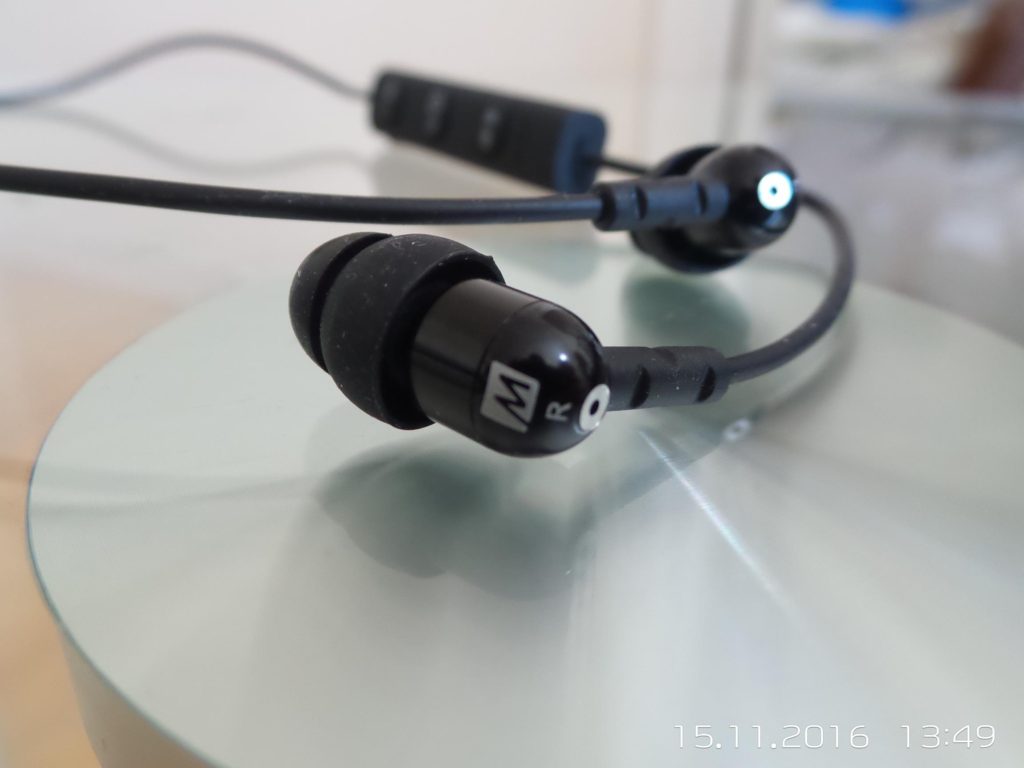 Thanks to hifiheadphones for the sample.

Is it me or is there an explosion of Bluetooth earphones lately?  Anyway, there would be the Bluetooth version of the old M9.  It’s been years, I can’t actually remember how many but let’s just say a long time since I played with the M9.  Back in the day it was a bassy but not bad sounding thing and at a nice price point.  Though I know I have a pair somewhere in the big tubs but I could not find the thing.  So unless I do track it down I’ll just have to go from memory.  Now there new ones, these have a nicer box, hmm no little case or baggy for them?  Oh well that’s a little shame but they are cheap so it’s forgivable.  Opening them out I rather like the control bit, seems a little big compared with others but why not and they have nice clear markings what the buttons do.  Feels nice in the hand.  The buds look just like what I remember the old ones looking like.

In the ear, well after a little charge, and pairing to the phone and they sound pretty good.  Hmm weren’t the old ones rather more bass heavy?  Maybe it’s the tips, maybe it’s tuning, maybe it’s just been a really long time since I heard them?  Still these are not bad, a little bass heavy, a bit trebly so the mids are in a slight valley but they seem not bad.  I really must try to find my old M9 set.

Predominantly a Lumia 735 and Nexus 5

Really better than what I remember.  Not other planet better but they are tonally not too flavoured and while they are bass heavy it’s not crazy town.    A little on the slow and laboured side, maybe I’m going crazy but I like it.  These just can’t be as bassy as the old ones, they can’t be, or maybe everything over the years has gotten more bassy so gradually I just can’t tell going back so many years?  This is going to bug the hell out of me.  Okay in comparison to other more recent things these aren’t especially bassy.  The quality is moderate and quite pleasant, not too heavy, no squishy or over inflated.  There isn’t super depth to them, they do trail off a bit but it’s in a nicely graduated manner.  It’s not trying desperately to cling on and losing control in the process.  So it comes across as relatively composed and clean.  A nice balance of heft and punch, very middle of the read.  It’s a rather versatile bass.  Pretty much any musical style they encountered they didn’t nail but they did everything rather pleasingly.

Quantity wise the bass is a bit heavy but really, it’s more or less about where it should be for most folks.  Heavyish but not stupidly bassy, I am really a bit surprised because the old m9 was really bass heavy.  These are only a little too bassy which is pretty good.

They are in a slight valley so vocal centric stuff isn’t their forte yet, tonally they are not at all bad.  A little soft, they aren’t detail kings but aside from the slightly fuzzy, slightly rounding there want much warming taking place.  They aren’t dry or breathy, they haven’t the detail for it but no great warm morass of creaminess.  So while they aren’t going to be you’re first choice for an evening with Norah these are very versatile.  At this point I’m wondering if my ears are broken or I’m having a slight stroke. The old M9 were big V shaped beasts weren’t they, but these are M9’s so shouldn’t they be the same, did they get a retune in their life some point back and I didn’t notice?  They aren’t exactly high end and vocals in absolute terms are rather so so, middling tonality so reasonably fair to everything and decent everywhere.  Nothing shines out as crazy good but they are 30 quid so of course they won’t be.

Temperament wise these are very nearly bang on in the middle.  Not the most detail going but with only a slight rounding they aren’t flavoured in a way to favour anything over the other.  A goodly versatile mid-range.

The same pattern occurs here as with the mids and bass.  Though in quantity terms the treble is the most muted.  Ever a great decision to make in cheap stuff as cheap things can’t get the treble spot on so you hide it.  Put it behind that slightly diffuse filter and then you don’t notice the little blemishes.  However, in detail terms it’s not bad.  Tonality too it’s really not at all bad.  I was perfectly happy siting listening to these, writing away, pleasing tracks coming and going.  Their versatility is what they do best, not being flavoured to favour anything in particular over another, whatever came on they did a nice job of.  While it doesn’t make for wildly enthusiastic writing these were nice, well rounded, pleasing and inoffensive no matter what came on.

They are fine.  They were powerful when they wanted to be but they never did that room filling, grandly epic scale.  Things were middling, they weren’t very far away either.  The soundscape was laid about you but nothing made me go ooooh, ahhhhh. Fine, nothing special but nice.

Great.  In the ears and I was done, easy-peasy.

Same as the fit, in they went I was good to go, wore for hours with zero issues.

They worked but as I like to wear up the mic thingy was right up at my ear and I was told I sounded like I was talking from the other side of the room.  So yeah while you can make calls you have to raise your voice a bit to be heard.  The track skipping and stuff though, that worked fine.

There is a little cable and it has one of those draw things so you can make the cable tight in use.  Though aren’t they mainly for wearing round the back of your head?  The cable is fine did its job with no issues.

Well you get a Spartan package.  4 pairs of tips, and I do like the biflange ones but sadly no little case.  At their price I don’t really mind but just saying you should prob order one if you want things to live a long life.

The buds seem fine, nothing fancy but fine.  The mic, buttons and bluetoothy bits thing, that I really liked.  Feels really sturdy and is that soft touch matte plastic.  Felt good and solid in the hand.

The mic bit, that I liked visually.  The buds, well just plain black glossy plastic.  They weren’t visually offensive but I can’t say I loved them.  They were okay but nothing special.

They are dynamics so don’t isolate super well, but for a dynamic it was pretty decent.  I was fine using them out and about, on a bus was okay too.  Tube and flights I’d skip but would likely be absolutely fine for going for a run or in the gym.  Please also remember that when music’s playing you will not hear traffic so unless you want to be the guest of honour at a funeral, use your eyes near traffic.

They are quoted at 4 hours of music.  So that isn’t the longest I’ve ever seen but it should get pretty much anyone through a commute, run or gym session right?  It just means after you’ve used them you will probably want to stick ‘em on charge.  To me the 4 hours seems a touch conservative and there will be various factors that affect it like music volume especially, maybe I played them more quietly than they expect people to?

For £30 are these the bestest things ever in the universe?  Na, not really.  However these are acoustically rather versatile, work well and are Bluetooth.  With Christmas coming up I can’t help but think if your buying for someone else and you want to get something that is likely to please anyone these would fit that bill well.  They are a good, versatile buy and for £30 you get your money’s worth out of them.

These are odd.  You see the old M9 was a bit of a bass cannon, V shaped taking aim at the CX300 and these seem much more middling than that.  These are still bassy but not bass dominant.  The mids are decent and the treble is more rounded and thus more easy on the ear.  These pretty much can take any music and spit it out at you rather well.  It doesn’t have any dramatic flavouring making it perfect for X but sucking at Y, it’s really quite the generalist.  Even handed all over the place and no matter what I threw at it, it never once didn’t cope.  Not that they are perfect, a jack of all means a master of nothing in particular so if you only listen to once sort of thing you can get items that may suit you better.

The more time I spent with the M9B they kept on growing on me.  If I A/B’d them to other things I’d notice what they aren’t quite nailing but there was just nothing that they got very wrong.  Nothing that I’d complain about at their price anyway.  I get they probably won’t go from Tori Amos to Elgar to the blond girl that thinks she’s fat.  They probably don’t need such even-handed versatility but they have it anyway.

So would I / should you buy one?  Me, well no I like having several specialist over one generalist.  You?  Well if you just want one thing, a Bluetooth generalist that’ll do pretty much anything and everything and won’t spank your wallet too much then you could do a hell of a lot worse than these.  They have a balanced hand that can do whatever you want and with a bass level that should please just about everyone yet not be oppressive.  It’s a really nicely even handed jack of all trades that just happens to be wireless too.