adminPosted on September 13, 2016 Posted in Miscellanea — No Comments ↓ 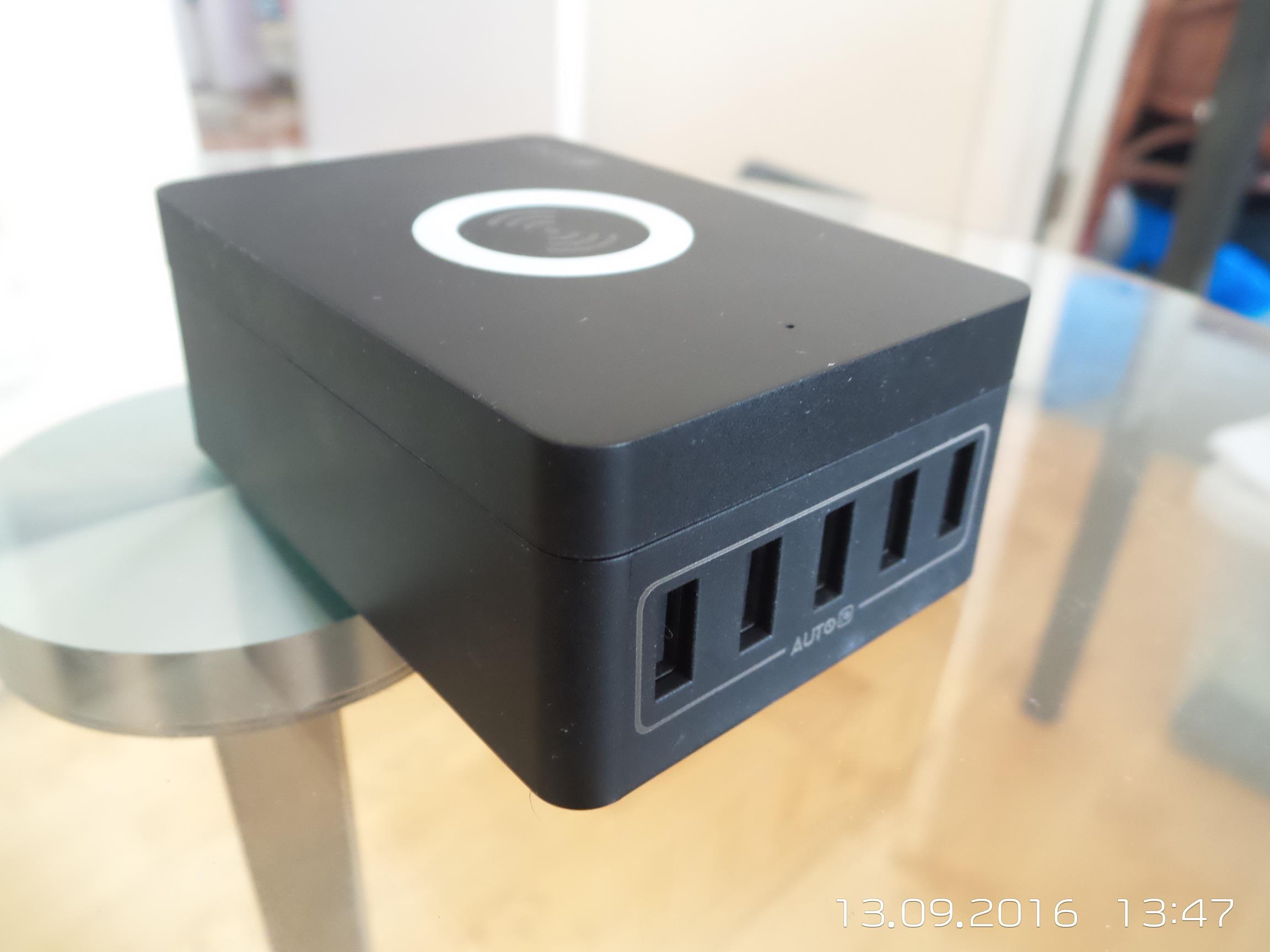 The iEC 2 in 1 5-Port USB Charger with Qi Wireless Charging Pad, try saying that five times.  This is the new version of the previously reviewed 5 USB socket and Qi charging brick by EC Tech.  So how does it do? 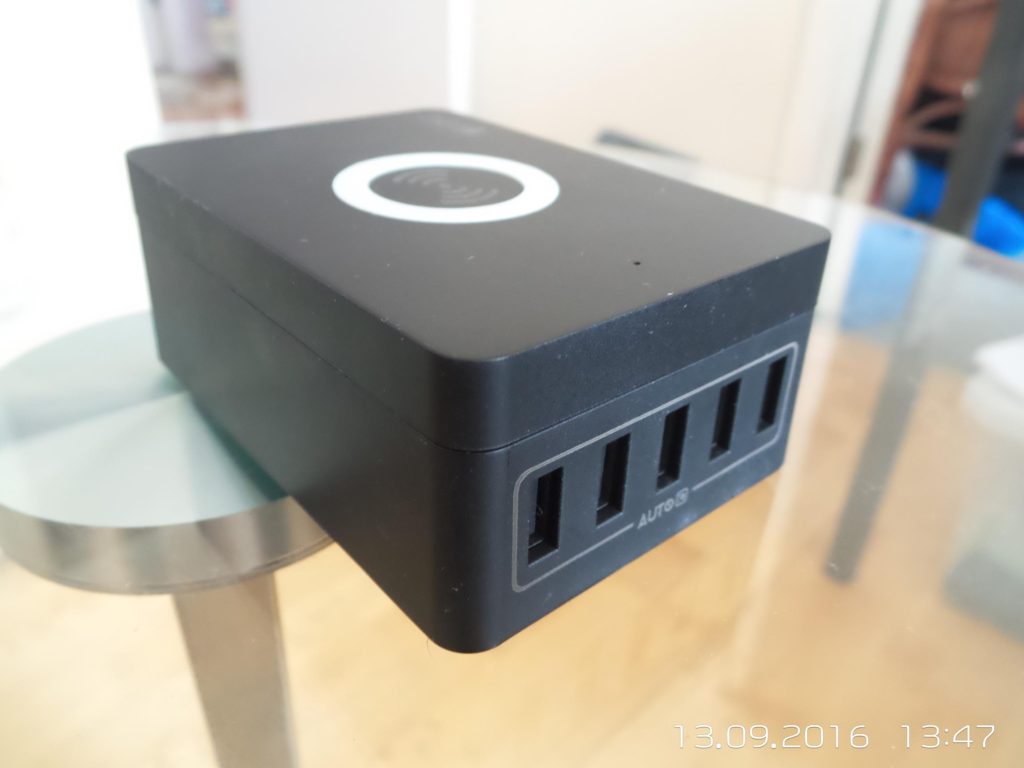 Well isn’t that just the most catchy name you ever did see?  Clearly it hasn’t got a catchy or memorable name but I guess it is a very descriptive one.  Those with good memories may recall I already reviewed something like this from EC tech, this however is the new version of it and it has a few changes.  On opening the box the first change that is apparent is that it looks way nicer.  This one is all matte black plastic, not that soft touch stuff but hard non glossy might be a better description.  Still I like it over its predecessor. However that isn’t the real change.  The real change is that Qi charging is no longer built into the unit?  What you might say, yes it is I can see it right there on the top.  You would be half right, it is there at the top but it’s not built in.  You see that top bit, the bit with the Qi charging, it comes off.  Yep it’s just there held on by magnets and has between them two little pins for supplying power.  However if you want you can lift it off and then it becomes like any other charging plate, it’s got a micro USB socket in the rear.

I am a great big fan of the built in, well sort of built in Qi charging.  I really don’t understand why more companies that make multi USB chargers haven’t done this?  Having seen it in use I just feel that every other charger is missing out in comparison.

I like it, sure it’s a USB charger so it’s not exactly a work of art but it most definitely better looking than the old version.  I think its looks pretty good, I like its neatness in the two parts of it, the Qi bit and the main bit.  It’s a moderately attractive object and certainly looks good enough that I’m happy to have it sat in my line of sight on my desk.

The device is spec’d on their website as 45W with the charger sockets being slightly confusing.  The “wireless charger input” is 5V/2A, “45w charger output” is 5V/9A then “wireless charger” is 5V/1A.  so I think what it means is that each USB socket can put out two amps and then the Qi charger spits out a usable one amp of current but it eats two amps to do so.  Thus you can have whatever combo you want it make up a total of 9 amps output.  Odds are you won’t have every output in use at the same time anyway.  So those are the paper performance, how does it actually do in the flesh.

Trying a handful of different things I have laying around and most of the phones didn’t want to go above 1.3 amp’s but the Yoga Tablet 2 sucked down 1.5 amp’s.  So it can obviously put out more than the phones seem to want to absorb.  With the Moto G (as it’s what I have sitting in front of me) and trying a different charger and it spits out a near identical 1.12A compared with the iEC 2in1 putting out 1.13A.  It would appear that is what the phone want to accept.  Charging a handful of things that output stated the same, well tiny fluctuations.  So it seemed happy to charge a bunch of things at the same time.

One thing to keep an eye out for, while the Qi charging plate being removable is cool it means you can accidently put it on the wrong way round.  Yeah I did that by accident and thought for a moment it was dead.  Nope it was me putting the plate on back to front so the pins for passing power to it weren’t making contact.  Oops.

Well, the plate has magnetic holding points so it snaps onto the base unit perfectly unless you put it the wrong way round of course.  The Qi charging plate for actual Qi charging seemed very unfussy.  I wonder if it’s got multiple charging loop things in it?  My Nexus 4 is usually quite fussy about its placement on charging plates and that isn’t helped by my having a case on it yet it worked really nicely.  My only complaint is the charging LED, that goes from red to blue to indicate charging, is on the top.  Yeah the top where you put your phone right on top of so you can’t see the LED.  If a turn the phone sideways it can charge happily and I can see the LED but it looks silly that way, I’d have rathered the LED was on the front.

It stayed weirdly cool.  Unusually cool to the touch, with the plate being on the top I thought it would create an insulating layer but with it charging a few things it stayed fine.  The Qi plate got a bit warm but they always get warm.

Coming in at £23 or US$30 I believe it to be really quite good value.  You can buy some 5 port chargers cheaper but you can pay the same amount just for a decent Qi charging plate never mind both.  Then you have that they go together so nicely.  Sure not everyone uses Qi but once you have its so convenient to use.  Yeah it’s slower than a cable but if you need faster charging, well you have 5 sockets here to choose from too.  It is a little bit more expensive than its predecessor but it is much nicer looking and while I will leave the Qi charging plate on the charger at all times, it’s nice that it’s removable.  It is a simple little thing but I rather like its elegant simplicity and the integration of the two together.

It is a USB charger so obviously it’s not the most exciting product in the world.  While its predecessor was a bit on the ugly side this one looks much nicer and it’s even more functional.  At first I thought the Qi charging plate was a completely separate thing and I was disappointed by that.  Then it came and I realised that its slots together and magnetically is held in place.  Love it, why don’t more USB chargers offer this?  So this is a neat, eminently functional device that looks reasonably nice on your desk.  Very practical a thing to have and versatile, a good value buy for charging your myriad of bits.