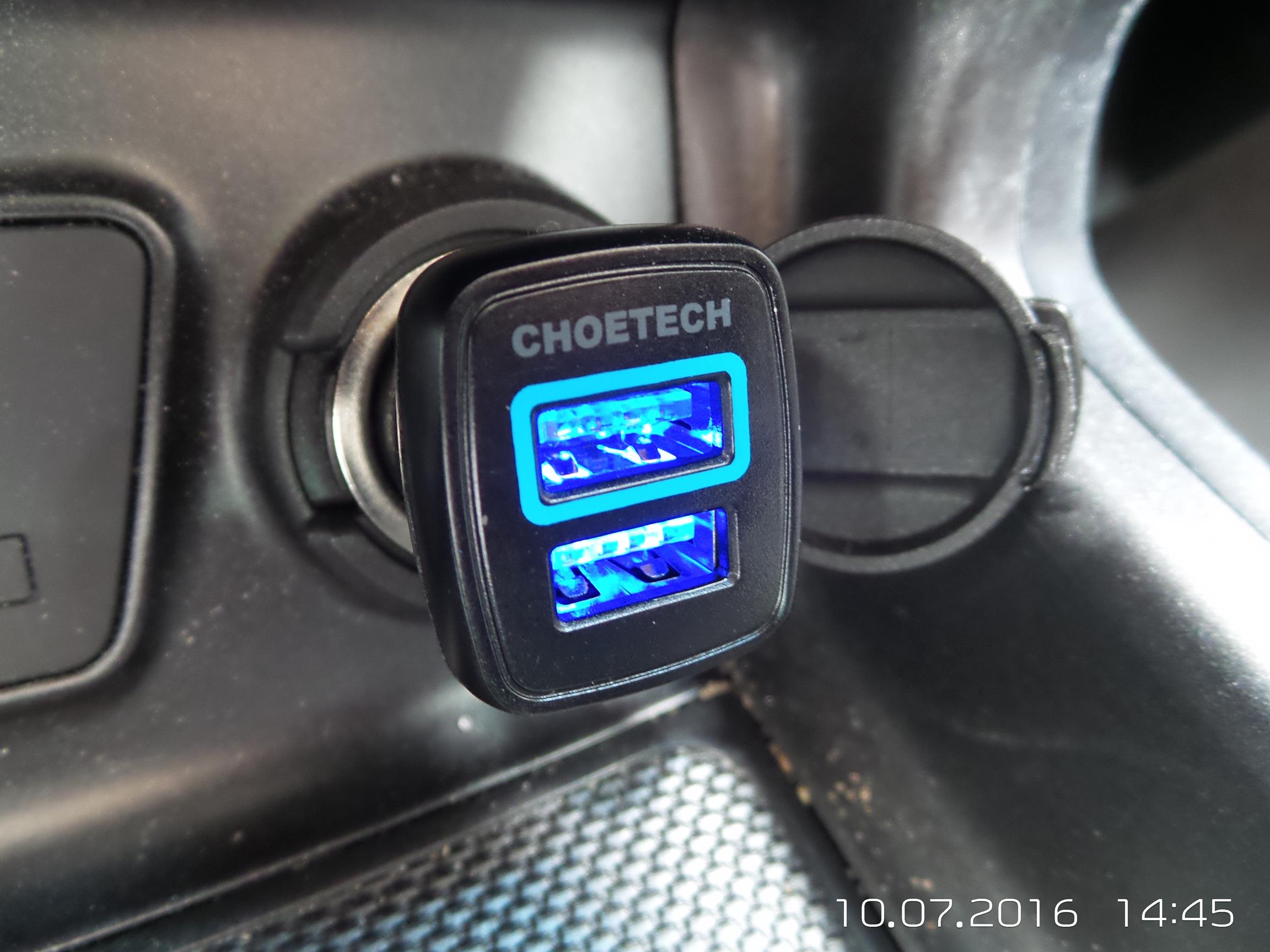 Choetech, another charger from them and a car one too.  This time however we have two type A sockets, one of which is QC 2.0 and QC 3.0 comparable.  Not only do you get the charger but it also comes with a rather nice USB-C cable, it looks to be a tremendous bargain but how does it get on?  Read on and find out. 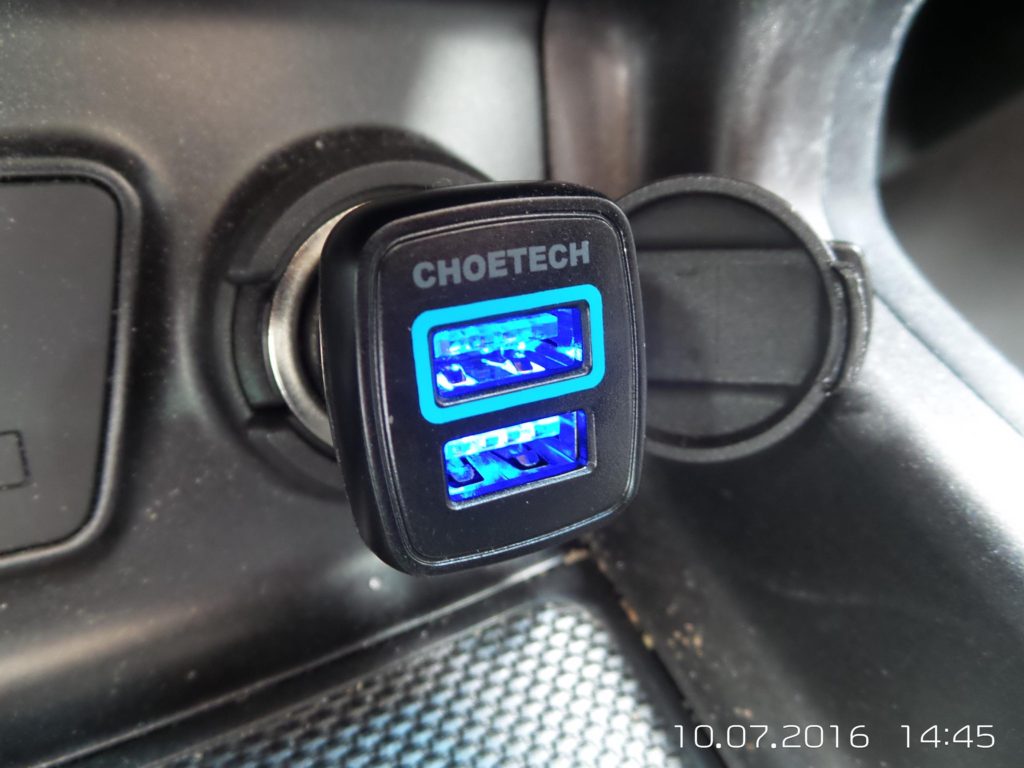 Thanks to Choetech for the sample.

The box is just like every other Choetech, sleeve with a natural cardboard box, neatly fitted and inside we have the charger.  I do like the little frosted plastic baggies their stuff comes in.  Oh, there is a cable in here too.  Upon inspection it’s a USB-C cable, that’s a nice addition I wasn’t expecting given the price.  I mean the charger with the cable is a tenner yet the cables go for a fiver on their own.  So the charger bit is only costing you a fiver???  Is this some special promotion or is that its normal price?  That seems that it can’t be right can it, now Amazon does have its “normal” price as £30 so it’s just on “sale” but half the stuff on Amazon is permanently on “sale” so I’m not sure that means anything.  Still if the thing is just a tenner, for the charger and the cable, little alarm bells are going off and flashing “BARGAIN!!!” at me.  However that seems so cheap I’m suspicious, I mean that can’t be right can it?

Okay so it’s a car charger, it’s kinda nice, black, with its little blue outline.  Oooooh when you plug it in its got blue LED’s inside it so the sockets light up.  I can see that being handy trying to plug in something when it’s dark.  It’s pretty, I like blue.  However, it’s a charger thing and while it’s not ugly, it’s uninteresting and let’s be honest, who cares what it looks like?

The bit that really matters.  The spec sheet says that thins thing can spit out up to 30 watts.  So the lower, or non-blue socket can spit out 12watts, 5 volts and up to 2.4 amps so that is the max power out form normal USB can handle.  The blue ringed socket, that’s the more interesting one because it can do things other than 5 volts.  It is the socket that can handle Quick Charge 2.0 and, yes and Quick Charge 3.0.  So that means it can do “3.6V-5.5V 2.4A(Max)/5.6V-9V 2A(Max)/9.1V-12V 1.5A(Max) total:18W” as taken directly from Choetech’s website.  So what that means in the real word is, if your device can handle it, this socket will make it charge faster.  Now while you may not always want super high powered sockets at home if you’re only charging devices overnight.  Then charging with a little trickle can be easier on the battery but that’s at home, while you’re sleeping.  If you’re in the car and you want to charge, say you’re driving between clients then you more likely want to get in a quick charge.  You likely want that quick charge to be as fast as in humanly possible, right?  This thing will offer one really fast charging socket and one super-duper fast one.

Super-duper good.  It’s so good I keep looking to check I’m looking up the correct product on Amazon, or have I made some mistake.  The charger for the current price of a tenner (£10) or US$15 in the US.  That would seem an exceptionally good value price, two sockets, both high powered but that it then also comes with a nice USB-C that would cost you a fiver (£5) or US$6.50 on its own……it’s not just good its suspiciously good.  Has someone marked the price wrong?  At this price if you own a car and you want a USB-C cable why would you not buy this?  So unless I’m reading something very wrong, this is jaw dropping uber fantastic value for money.

I cannot help feeling I’m reading something wrong about that price, because I don’t get it, how can it be so cheap????  The charger itself, yeah I think the price if it was just for it would be really good value but to throw in the cable and it’s a really decent cable too, how?!?!?  It sounds too good, so I’m suspicious yet I cannot find anything wrong.  If it was maybe just Amazon UK then I’d say someone just made a mistake but it’s insanely cheap on Amazon US too.  How?!?!?? How can it be this cheap, I don’t know but it is and at this point I’m inclined to think it’s either an introductory offer or maybe it’s a promotion that it comes with the cable but wont in the future?  I don’t know, as its stands its value for the pair seems too good to be true.

So should you / would I buy one?  Yes, yes, yes very easily.  I mean you get a really nice cable and the charger, that the charger effectively cost a fiver is just ridiculous, it’s laughably cheap and yet it is actually good.  It’s a nice, solid, well made product, that little LED lighting up the sockets in the dark, I mean it’s only a charger but it’s had some thought and it’s fantastic.  Not only is it nicely made, it’s user friendly and it’ll charge your stuff like gangbusters.  Then as if that all wasn’t enough you get a really nice cable, USB-C cable at that.  Seriously, if you’re at all thinking about a car USB charger just grab one and do it now because I cannot see it stay at this price for long, not if it’s going to continue coming with the cable.  Mega bargain, grab one.