Yes it is another Jesbod, with another crazy nice box.  Of course the box isn’t important, its what’s inside that counts.  Well the QY11’s look great but how do they sound?  Read on and find out. 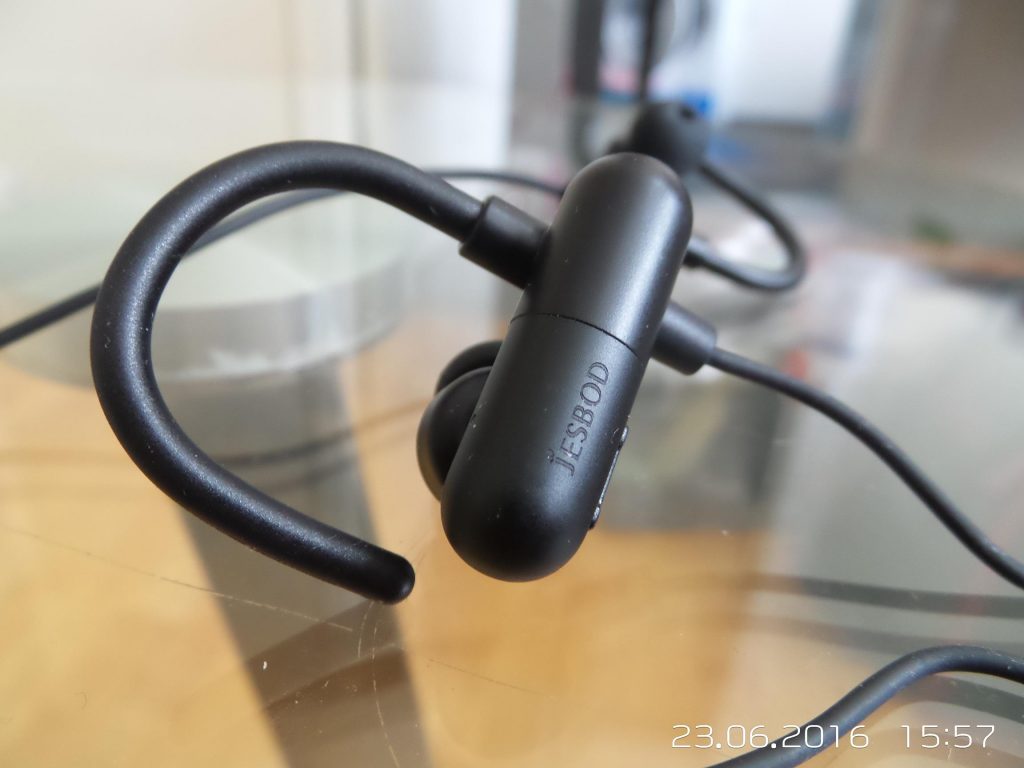 Okay this is just getting spooky, Jesbod, a brand I’d never heard of a few weeks ago and another wow box.  Sure I know that the box isn’t really important and anyone that really cares about the box of a product is an idiot but…… seriously, look at it.  Random Chinese companies are support to start out using cheap ‘n’ nasty boxes that look terrible and feel worse.  Oh no none of that here, it’s a change from the natural, unbleached box of the QY13 but this is just as impressive.  Its jet black, with all black innards, seriously this box looks and feels like it should house a product with an extra zero on its price tag.  It really does make for a wow, first impression.  The buds are interesting looking, their over the ear but the cable drops right down shape.  You really can’t wear these any other way.  Thing is cable straight down means that cable microphonics could travel straight up it.

In the ears, having slapped on a pair of Comply’s because, well laziness mostly.  Hmm their shape is limiting.  These need to sit pretty shallow, you just can’t push them in.  On the left I think I’m not quite getting a seal.  Hmm the bass though is good, a little abundant.  Hmm are these the exact same as the QY13?  You know I think they are, just in a different shape IEM.

I feel like I could just copy paste what I wrote for the QY13.  A bass heavy presentation but not wildly so, tbh I reasonably like a fairly bass heavy sound anyway and I find its quantity a little bit much but I’m still perfectly happy with it.  It’s really good in fact.  Skipping around through tracks and I find that pretty much everything I like works will with them.  It’s really enjoyable.  Now sure there isn’t endless depth and its not the most solid bass that ever there was but come on……Bluetooth and this cheap?  A little bloom, a little expansion takes the punch out of the bass but that makes it more easey on the ear.  Seriously every track that comes on sounds great out of them.  I know what it’s not doing technically right but I really don’t mind, it’s so pleasantly enjoyable.  A little big and billowy but it’s got that nebulous, indefinable quality that I just cannot help liking them.

Quantity wise they are overblown and expanded from where they sound be.  Still from a more mainstream perspective these aren’t all that bassy, they are probably spot on what people would go for.  A bassy but never overwhelming or unduly domineering.

They are a little recessed.  Ahh well that’s not really a shocker is it?  Tonally they are a little off, there is a natural quality but I think that bass is sucking a touch of air out of them.  This makes them a more weighty, slightly lower vocal preference.  It’s very staid, a little warmed, a little complacent.  They are missing a dash of air, some energy, some sparkle, these just lack something in the upper mid range.  There is a certain liveliness that just is not there.  Don’t get me wrong I found them still to be highly enjoyable but there was indeed something missing.

Quantity wise they are behind the bass and maybe about the same level as the treble.  I’m happy with the balance.  It’s reasonably level with the mids and treble then a boost to the bass.

Pretty nice.  They aren’t the worlds most detailed nor refined but then at their price that’s simply a given.  However with their warmed sound signature it isn’t particularly noticeable.  They are never pushed forward, never dominant, never exploding all over the place.  For my ears it’s great, I’m treble sensitive so I never really want them up front and in your face.  Here when they sort of come out to play they do their best to stay in the back and gently shimmer.  They want to give you a pleasantly sparkling idea of what’s going on while fudging the details a bit.  If you push them and listen out then you’ll notice that the treble will descend into a vaguely scratchy mess.  Even when it’s thusly scratchy it’s not the energy to be truly abrasive to the ear, by that point it’s in the back where it hasn’t the volume or power to actually scratch you.

Alright.  They are pretty goodly sized in all directions.  Vocals tend to be somewhat close and bang in your face, never forward but right in front of you.  The bass I can’t really locate, it’s there, it’s pretty big but it hasn’t got a particular place where it’s coming from.  The treble, that’s kinda at the back of the stage, maybe just behind and to the sides of the vocals.

Mostly good.  They are a little bit different in their shape so you can’t wear however you like, they must be worn up, which I’m good with, however……. That means the cable comes directly out the bottom.  That means no looped over the ear to absorb vibrations.  They also very much wanted to sit shallow and that’s just that, they can’t sit deeply.  Notably my left ear only just got a seal, I kept wanting to push them in but you can’t.

Great.  Their shape was a strange but in use they were perfectly comfy.

Sadly you do get some.  Okay so it’s not a lot but with that cable having to sit down directly meant that it could and did catch on my collars.  When it did it sent vibrations directly up.  Now it’s not like it was some massive problem but it was certainly noticeable compared to its near twin, the QY13.

It was fine.  Honestly the cable isn’t significant enough to provoke more discussion.

You get a micro USB cable to charge them and 5 pairs of silicone tips.

So I made a quick call, all was well.  I heard them fine, they heard me fine too.  Oh and the button all worked great.  The play/pause/skip/answer call button worked and the volume controls worked great too.

Very nice.   The closer you get to them the less fancy they appear but they still feel quite solid and decently put together.  There really wasn’t anything I could count as a flaw.  They do look more fancy from a distance, up close you can tell they are just plastic.

I like them.  In pics and from a distance they look rather funky with their rather peculiar shape.  They look so different and interesting.  The weird capsule shape body then the stark and angular ear hook coming out of them.  These is something, I dunno, 80’s esq black and angular about them, I like them.

Hmm it was okay.  It was still a little lacking on the left, where I just always felt like I wasn’t getting the best seal.  They were fine for walking out and about and you could get away with them for a bus commute but you know. Tube and flights, na not so much.  As ever they would be more than enough to get you run over if you aren’t looking where you’re going though.

The spec says 6 – 7 hours.  You know depending on volume and whatnot.  Since I wasn’t going to sit with a stopwatch for 6 or 7 hours my best guess is that that seems reasonably a fair assessment.  That should be enough to get anyone through any commute or gym session with ease.

Super good.  Actually its biggest value issue in that its sibling, the QY13 which seem to be largely the same thing but in a different body, is a tiny bit cheaper, fits me better and I think may actually sound a tiny, tiny bit better.  I don’t want to say they do sound better because I suspect it’s down to the fit.  Mind you the QY11’s do look much cooler than the 13, the 13 are not the prettiest things ever.  Anyway…….the things are 20 quid, you’re getting a bargain.

Is it me or is there an explosion of Bluetooth earphones just now?  What’s more they all seem to have gotten good, seriously good, as in good even compared with wired things at the 20 quid price point.  I liked it better when there was more clear differentiation between things but so much is getting so good and the QY11’s are one of those.  At their price I really cannot pick fault with them.  I mean sure they aren’t perfect, mostly because their siblings the QY13 are better and a tiny sliver cheaper.  These sound a teeny bit more bassy and less middy than the 13 and the 13 is a better shape for going in my ears.  However the 13’s aren’t lookers and these QY11’s do look a little bit kick ass.

Now I would never dream of picking something based on looks but…… given their target demographic I don’t think it’s unreasonable to think that many people will.  In fairness they still sound superb for their price and oh no, they a little more bassy, well their target demo is just going to hate that, lol.  They do look nice and they sound great for the price, they also come in a crazy nice box.  These just all-round feel like they have been someone’s baby.  Someone at Jesbod has put some real care and emotion into these, the little things, the attention to details.  You could be very easily forgiven for thinking these were a much more expensive product than they are.

So should you / would I buy one?  Well….. hand on heart I’d take the QY13’s as they fit me better and were a hint more middy.  However if you care about looks these are basically every bit as good but these look way cooler.  They just give you impression from the moment you see the box that these are a considerably more premium earphone than what they are priced would indicate.  It’s a really nice sounding, acoustically competent, Bluetooth earphone that costs just £20.  I mean you really cannot bash them in anyway at that price, they are so acoustically competent for something of that price, I’d be happy with their quality wired never mind being Bluetooth.  Great stuff.