adminPosted on November 19, 2016 Posted in IEM Reviews — No Comments ↓ 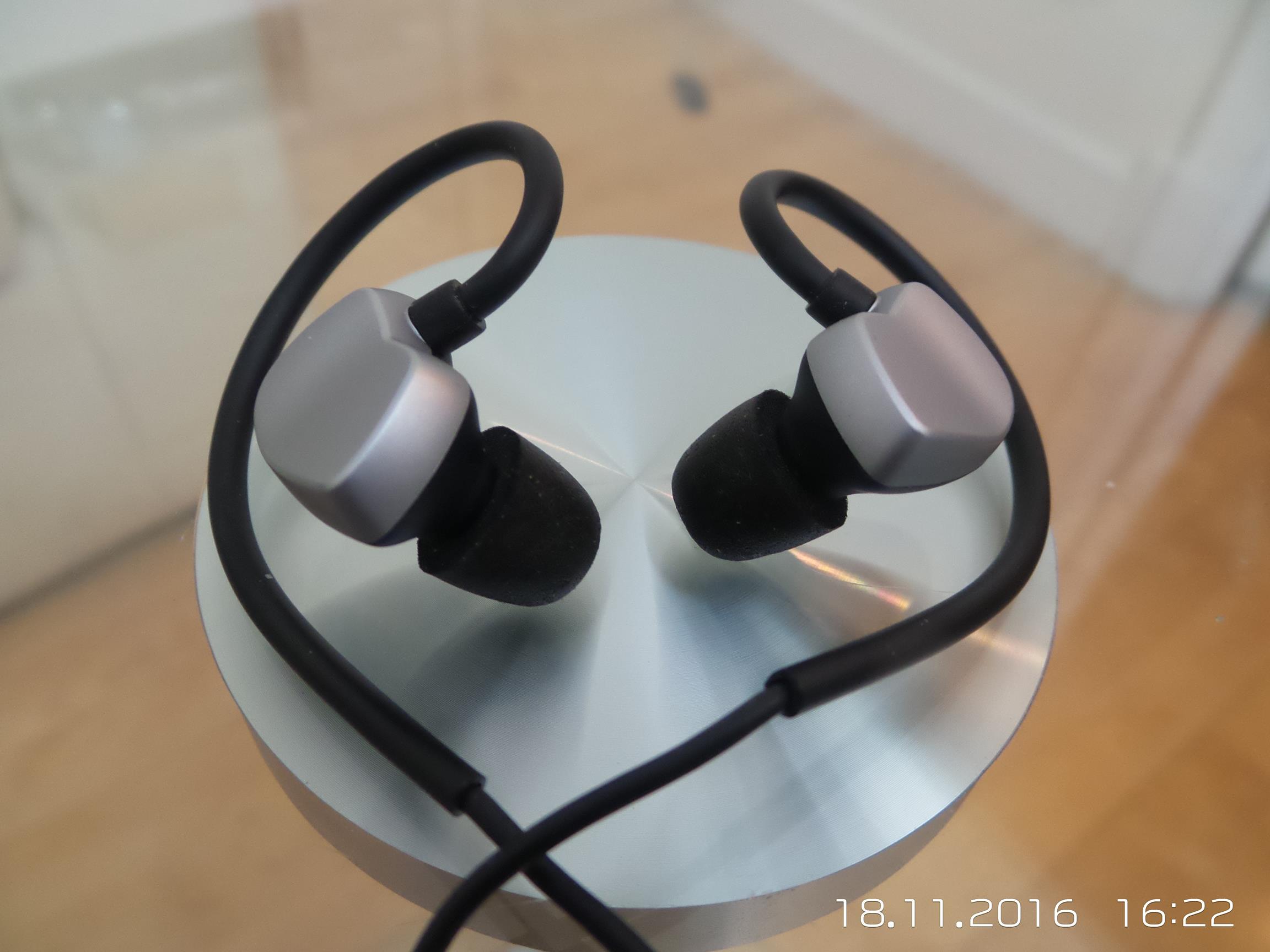 The AudioMX EM-S4 Earphone Review, a great looking little earphone for sure but how do they sound? 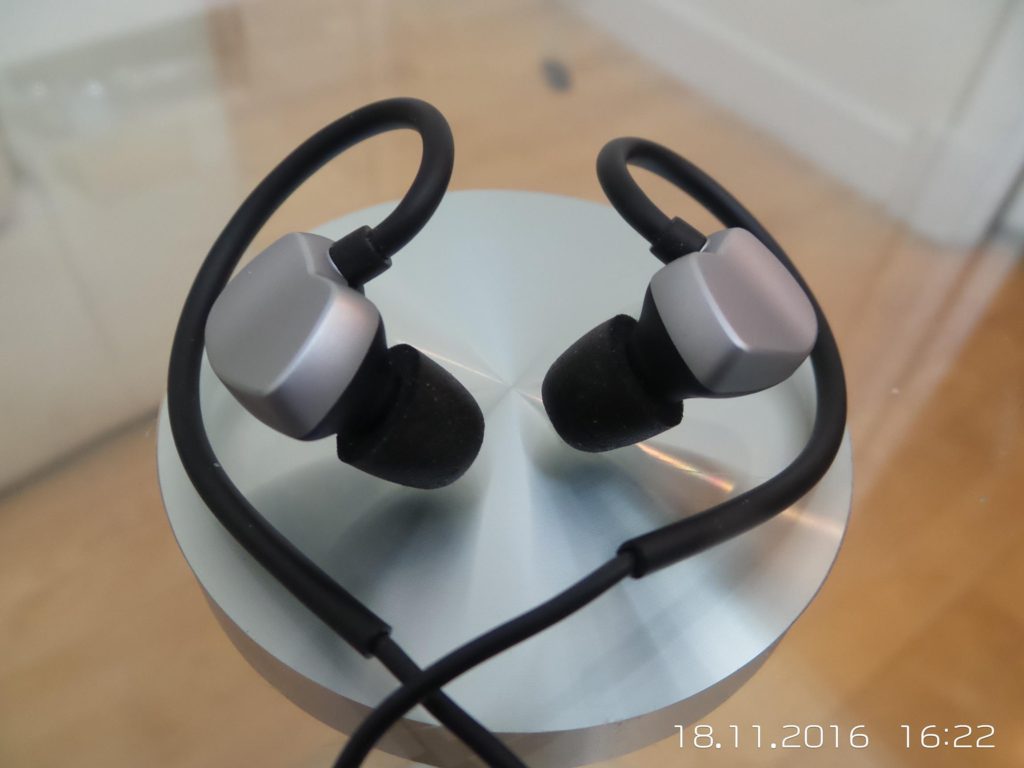 Thanks to AudioMX for the sample.

The box seems a pleasant affair.  It’s one of those magnetically clasped flappy lid kind.  When you open the flap you have a plastic covering / window to the bits underneath.  The buds and that case both on display.  I must say they do look rather pretty, the buds and that case both look superb for something so cheap.  Pulling the plastic thing off and getting the buds between my fingers, it’s apparent that the silvery thing is just painted plastic.  Oh well, I can’t complain given their price, they still look pretty.  That case now that seems really nice for an el cheapo.  There are number of companies that could take some pointers here from AudioMX, nice looking above all practical.  Then we have a bunch of tips.  Hmm it has a built in ear guide thing, it seems okay but I’d prefer if was removable.

In the ear and they are alright, rather warm, a bit bass heavy, not the most detailed thing ever.  Though they are really cheap so I should probably try to keep that in mind.  Not bad but is it me or do they not isolate very much?  Hmm.  Burn in time.

They are interesting.  In comparison to the mental equivalents I jumped to, the S500 and the Clarito, the bass here is not so much as better bet it’s more diffuse and more extended.  There is a slightly gentle feel to it but it’s not fuzzy.  Hmm this is one of the dual dynamic driver things where is some slightly out of phase scattering so there is that super tiny slight diffusing impact but the overall impact isn’t soft.  It’s curious more than its good but I rather like it.  There is a little timing thing give a more speaker like quality to it.  You know unless your perfectly equidistant between speakers then the timing of notes from them will be that tiny bit off.  It gives that something little bit extra, something that little bit bigger.  Depth wise it’s rather nice, it dos decline but it’s a slow, gradual roll away.  Gently and gradually so that you don’t really notice, it’s just sort of there.

In quantity terms these are rather boosted, not huge but they are bigger than the other two, these aren’t such with the initial impact but they move more air, there is a greater robustness to it.  More graduated, warmer, more fully extended.  I like it.

Well of the 3 the mids here steals some of the quality in the bass. There is that ever so slightly diffuse quality.  There is a tiny little diffuse quality yet the vocals themselves are nicely rounded, articulated.  In detail and clarity though that plays against them as these just don’t sound as clean nor direct as the other two.  These are the more relaxed, notably in mellow girly vocals such as the Puppini Sisters they are so nice.  Melodic, gently flowing and that diffuse thing gives them such a pleasantly layering effect.  The three ladies harmonising just suits them perfectly, that little spatial scattering just works.  Though when you get more one on vocals as is the more common, they don’t quite get the intimate, up close and personal directness you want.  They are just more laid back, that touch scattered.  This also means that the detail levels do supper slightly too.  Not that they are bad or anything, but just a little softly mellow.

Tonally there are a little smooth,  though while their slight warmth in the lower registers male vocals can sound a little over heavy, girly vocals are warmed up but they seem to work better overall.  They aren’t quite so flavoured by them.  Girly upper end vocals though are in a bit of a dip, they do lack a bit of energy up top making for a more overall sedate sound.

They are unusually muted.  For being a dual driver the typical inclination is to dial up the bass and the treble to show off, these don’t.  The treble is actually far more relaxed than I expected.  There is a rather admirable amount of detail for the money but you need to really listen out for it.  The treble is very laid back and with that diffuse quality again, lacks and hard edged brutality.  That makes for a quite lovely presentation it makes detail less obvious.  Now I prefer that things go soft up top than be hard and edgy if you can’t nail pin point clarity and refinement but these seem so overly refined.  They are not bad for my treble sensitive ears but the relative abundance with the gentle presentation means that the treble isn’t all that apparent.  It’s there but it’s not all that noticeable and it should be more noticeable than this.

Now the quality of the treble is actually rather good but you really need to focus in on it to notice.  I’d think people more likely to prefer the treble was dialled up a bit and if it’s a bit broken up, so be it.  These make for a very relaxing listen, maybe too relaxing for some.

The diffuse quality again, these sound much more large and spacious than most things at this price range.  These sound gently open and broad.  Nicely integrated an acoustic field too.  However it really isn’t great at portraying up close and intimate so it may not suit all listeners.

Excellent.  For my general misgivings about built in ear guides these ones worked perfectly with my ears.  I wore them for many hours at a time with no issues.

I did want foam tips on as these are a bit shallow sitting.  Its unusually shallow sitting but hey, then you get a bigger soundscape.  Still you may want to go with tips bigger than you usually do.

Very nice.  It felt sturdy and it was highly flexible.  It gave me no issues at any point.

Despite their not being metal they did seem impeccable.  No imperfections my eyes nor fingers could detect.  The cable was nice, the jack was sturdy and it was metal too.  The mic and Y splitter were metal too.  A nice showing.

Meh.  These did not isolate very much at all.  They sit shallow for starters and I think they have two little vent holes. On paper I wouldn’t have thought they wouldn’t be so open but they were.  Not high isolators and while they are fine for out and about, on a bus I’d be a little more hesitant.  Tube and flights are pretty much out.  However with music playing, as ever they will be enough to get yourself run over if you don’t make use of your eyes near traffic.

You know, I think these look fab.  I know the buds are just plastic but they still lo fantastic.  The shape of them too, it just works.  These really don’t look like they cost what they do, I like them very much.

Ringing up some one, I was told that I was clear enough, not super loud but fine.  Unusually they did comment that they could hear what they thought was a radio in the background.  It was a TV show but unusual that they would pick that up.  So maybe the mic is a bit sensitive to external sounds, a bit more than most?  Who knows but for calls, it works fine.

Well for something cheap they actually did rather respond well to having power thrown at them.  They did sound fine out of everything but they in particular liked the Solo Ultra.  They cleaned up and they just sounded more dynamic.  Phones were, a little more staid, a little more heavy.  That may actually be what some people prefer but I like them being pushed towards a more open, more dry sound.  I realise that in the wild they are never likely to encounter a big amp so they don’t need one but I think if you have one to hand you may want to give it a little try.

Excellent.  You get a four pairs of tips but mostly it’s that little case that does it.    It is a perfect little case. A great shape, a great size and in a fan of grey so I think it looks really good too.  I note that the two things I’ve been mentally comparing it to both just have soft baggies rather than hard cases.

Unsurprisingly they are really rather great value.  As is so common these days, the quality to price balance has become so good.  They are good sounding, great looking and have a great little case which should encourage its use and thus promote a long healthy life for them.  What isn’t to like about them?

These are a slightly mixed bag in terms of their audio.  On the whole I like their hint diffused sound, it’s so relaxing and easy to listen to for hours.  Which is great for reviewing because you can listen to for hours and don’t mind.  No abrasiveness, no ear tiring out and everything sounds nice on them.  It’s a very pleasing sound signature, smooth without being overly warm.  Certain things time and gain kept coming back to me and one band in particular was the Puppini Sisters.  Their gentle melodies and the acoustic vocal layering they use came across so well on these.  The bass was large and easy, the mids so nicely layered and the treble is all gentle delicate stuff.  They paired up perfectly.

Where they didn’t pair up so great was things requiring a more up front, in your face sound.  They just wouldn’t.  It wouldn’t do things up in your face, anything hard and abrasive, aggressive rawwwwww.  Nope everything that that little bit of gentility to it.  Now that works great for me, yep pretty much everything I played on them I liked them.  That treble too, I really wasn’t fussed that its so sooooooooo relaxed.  That’s fine for my ears, really it is but I know that it’s not where it really ought to be.  I also know that there will be people out there will equate this treble abundance and presentation as having hardly any detail.  There is detail these but you have really look and listen out for it.  It isn’t readily apparent at all.  Pair these with a warm source too and you’ll get served up hardly any obvious detail or energy up top.

So would I / should you buy one?  Me, maybe I do like their relaxed and laid back nature, plus I like their looks.  I’m not sure though if maybe they are a little too relaxed up top.  I’m no treble junkie but these are so indirect.  You?  Well do would a really lovely, mellow creature that you can melt away into and casually view its broad soundscape?  That’s something it does really well, that dual driver diffuse quality makes these sound spacious in a way normally only rather more expensive things do.  Of course it’s at the expense of pin sharp clarity so you’ll have to decide which style is more suited to your tastes.  Still I do rather like the EM-4S, its got some great acoustic qualities to it and a lovely genteel presentation.