adminPosted on December 6, 2016 Posted in IEM Reviews — No Comments ↓

The Accutone Taurus Earphone Review, coming after the Pisces lets see if these ones get on any better? 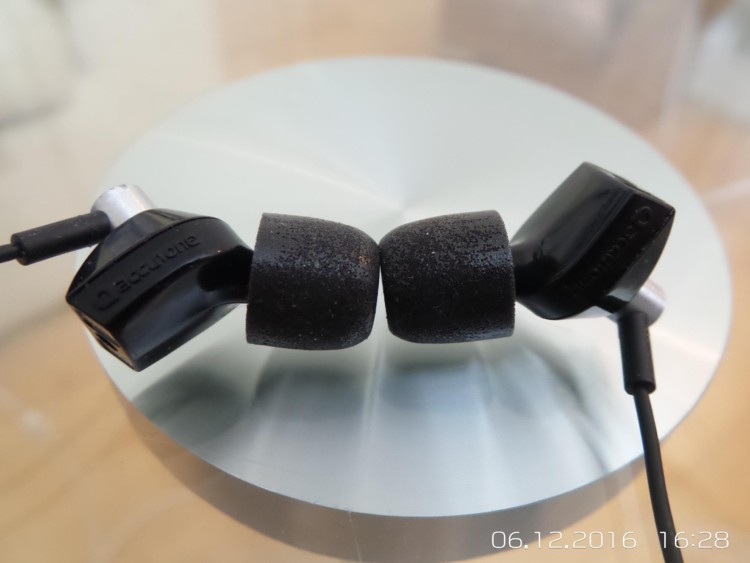 Thanks to Accutone for the sample.

Hmm they have an interesting visual look.  The box is the same as was on the Pisces, and I don’t like tearing things to get them open, oh and when you lift the lid off the innards lift off with it.  Hmm what silly silly issues, did no one test these and make the foam bit a sliver smaller than the insides?  Anyway not that these are important but it’s just silly.  The buds all look kinda nice, though I do note that there is no manual. Normally I’d not have noticed but I wanted to look to see how the bass tuning bits should be set.  Yeah their website which the world’s best example of style over substance, tells you nothing.  Sigh.  I’m coming at these after the Pisces, I wasn’t loving them and these seem to a rash of silly. Desperately silly mistakes.  Seriously Accutone, if you give me 20 grand I’ll come in for a month and tell you how to fix all these idiotic little things.  I’m in a bad mood.

In the ears and hmm yeah that bass needs dialled down.  At least they do say they are by default set to be really bassy.  Oh, err so how the hell does the tuning work.  The port just turns round forever.  Sigh.  Ah okay, so I think if you have them vertical its bassy and horizontal, its least bassy.  Ahh okay that’s much much better.  Oh actually these are not so bad.  I’m still in a bad mood but you know what, these don’t suck they don’t suck at all.  Not convinced they are perfect by any means but I’m actually being brought out of my grumpy mood.  They are actually kinda nice.  Still a bit bassy but not bad.  I’m actually knida liking these.

Well let’s just get this out there, if you want heaps of bass these can do it.  It’s not the world’s best bass but there is an abundance of it.  I suggest you stick them to the lowest amount.  There is still quite a lot but it’s much more sensible and its quality is improved.  The still a bit humpy and its depth is moderate but it’s nice.  Nice to the point I began to rather like it, it’s a little slow but its tuneful and pleasing.  A little rotund for sure but being a bit on the heavy side when it comes to bass is rarely a show stoper for most listeners.  Additionally when the bass is dialled down it stops flabing all over the place and stops trying to take over the mids too.  There is a more gracious open backed quality to them, there is a fullness to it yet it’s not closed and crushing.  It’s so improved in tone and temperament by opening up the little buggers, I find I am, actually liking it and dancing about in my chair.  Ever a sign that something is working for me.  Good lard I’m actually likening them sufficiently that I’m listen to tracks I like rather then things I should be to test their acoustic behaviours.  I didn’t see that coming at the start.

Quantity wise so long as you keep things at the low bass setting they are still rather bassy but not crazy, if you dial it up then its quality suffers rapidly.  At max it’s rather like the Pisces I reviewed the other day and while there may be some that like that sort of bass, I am not one of them.

Nice:  They aren’t perfect, they are a bit recessed but their given space to breath when the bass is low and they have a decent breadth to them.  A degree of airy spaciousness with their not entirely sealed enclosures.  It’s not perfect but it’s pretty enjoyable.  It’s a little bit on the heavy tonality wise but the slightly airy presentation makes it feel a little bit lighter than it really is.  It’s nice.  They aren’t super detailed but they are pleasing.  Sitting listening to “Two Beds and a Coffee Machine” it’s not exactly a vocal masterpiece but I I’m very much liking it.  Pop type vocals are really good on them and then when the bass slips into the picture its absolute depth may not be great but when dialled down it pulls away from the mid/bass cusp.  Therefore you get the bass rolling in nicely separated and gives quite the complimentary accompaniment.

Quantity wise it’s a bit recessed but with the bass an minimum it’s not all that far behind the bass.  It’s a little slew and heavy so lightly airy, breathy vocals aren’t all that but most pop music vocals are nicely rendered.

Alright.  They are greatly aided by the airy spacious presentation.  It gives an initial illusion of there being more air and delicacy up top than there really is.  They are tuned very well for being aimed at mainstream pop.  There is a credible amount of detail but it’s not hard, edgy in your face at all.  It’s actually rather reserved and forgiving.  It’s just what you really want for most pop music which is rarely well mastered.  One slight issue is that I noticed on a couple of tracks there was a slight inclination towards a little sibilant spike.  Not outright stabby but there was a sharp little peak.

In fast and vigorous treble, such as in “Cave In” there are a bit slow and a bit heavy to really go with their light and airy flow.  Even with the uDAC and Solo Ultra there wasn’t that open airy dazzle there ought to be.  Like someone had put a little bit of a dampener on things.

There is a slightly open style to them but their heavy tone somewhat counterbalances that.  So there is a moderate size going on, not much in the way of distance but reasonably all round, side to side and forwards and back sound field.

Great.  The bud I could wear up or down and with the cables being able to swivel round they worked super nicely.  In the ears and boom, done.

Excellent.  A little shallow ish fitting but I was happy to wear them for hours comfortably.

Actually there was a bit, even wearing them up the cable seems to transmit any knocks from my colours upward quite efficiently.  Foot falls were mostly fine with them being not super sealed but wearing down, I missed there being no chin slider.

Erm yeah they are not bad.  The photos look super glossy and while they are by no means ugly, I wasn’t really feeling it.  They are visually fine but they just aren’t all that, and when you compare to them their Gemini siblings these have taken a whack from the ugly stick.  Not that looks should really matter but visually these can’t compete with some of their siblings.

A nice round little cable. It’s a bit thin but its terminated with MMCX connectors so if you don’t like the cable, or you kill it, then just change it.  Yey for removable cables!!!

They are a bit so so.  They are pushing at the limits of what I’d be happy using on a bus or for out in traffic.  Of course with music playing then it’s really easy that you may not hear the means or your death hurtling towards you if you don’t remember you need to keep your eyes peeled.

You get a good tip selection with a memory foam things and a pair of Comply’s.  Now the case, that is pretty but the buds don’t really fit in it.  They will go in if you shove them pushing out the case but honestly, you need to buy a case yourself.

As with their siblings, the play/pause button worked fine, the volume didn’t on the Nexus 5.  In calls the mic though was good, I was told I was clear and that was wearing them up so the mic was up nearer my ear than my mouth.  So a good showing there.

Like with the Pisces there didn’t seem to really benefit all that much from being amped well.  There were some moderate improvements but nothing spectacular.  The treble did improve a bit and the bass firmed up a touch but honestly, there really wasn’t that big of a difference so you shouldn’t feel any great need to amp them.

Well this I a bit odd.  You see their official price is US$89 and that’s basically what I’ve gone by and I’ve not exactly been bowled over by them.  Yet when I look for them on amazon UK they aren’t there, but they are on Amazon US.  Where they come in at US$23.  So that’s pretty different from nearly 90 to just over 20 and at 23 bucks their value rockets upward.  For such a price, variable bass, MMCX connected and their audio quality they start to look fantastically good value.  However I don’t know if that price will hold for long, so at $23 they are super-duper good value, at $90 not so much.

Well we have had a mixed bag so far.  They are acoustically not bad when the bass is minimized and if you go by their present Amazon US price then, whoa they blow your socks off but their RRP of 90 is well, it’s not all that great.  Their audio is fair but nothing to scream about and then that stupid case. There just aren’t really cutting it for 90 in today’s market.  They aren’t terrible but when there are so many fantastic offerings out there for that price these just are not passing muster.

Still it’s not all bad, the variable bass it’s nice for users uncertain of how much they want and as their tastes mature they can dial it down.  They are also potentially a cheap way to get something with removable cables and their mic seems very good.  If you make lots of calls then Accutone’s headset background may be just what you need and for $23 you get an absolutely solid, excellent buy.

So would I / should you buy one?  Me, at $23 yeah they are pretty good.  Not totally to my tastes but really great for that price.  At 90, no.  You?   Well if you want that tons of bass and like the idea of being able to lower it as time goes by, of you need something with a good mic or with removable cables then sure, they are well worth snapping up at US$23 you get a steal of a bargain.  At $90 well they may not be my first recommendation.  Not that they are terrible but competition is fierce at $90 and these have too many little issues for me.  Rather than being all about the bass, it’s all about the price tag you can get them at.