adminPosted on November 19, 2016 Posted in Miscellanea — No Comments ↓

The UMI-BTS3 Portable Wireless Speaker Review, while this may be the best looking and most feature rich Bluetooth speaker we’ve had in so far, but how does it sound? 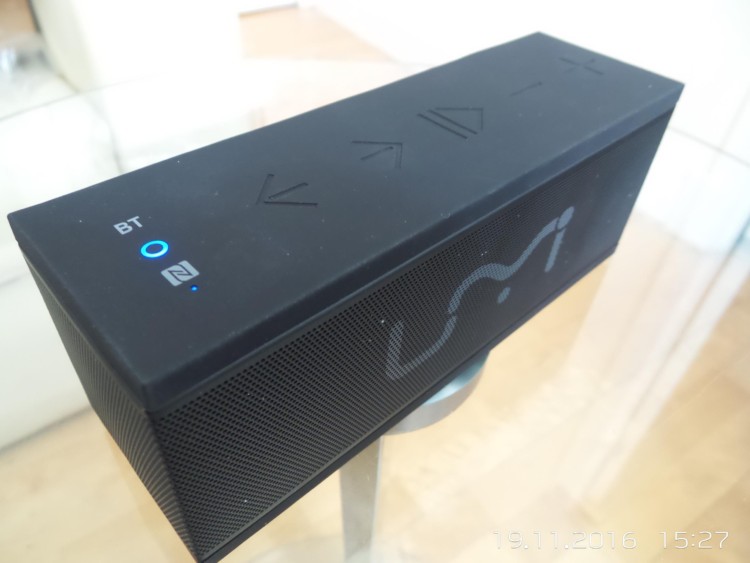 Thanks to UMI for the sample.

UMI do speakers?  Well why not everyone else is too.  So I do wonder what will make this one different from any others.  Opening up the box its nice looking, all black and all matte black too.   Ooooh it’s kinda pretty. Oh, the top and bottom are clad in black rubber.  Okay this looks nice for a little speaker, and I like those bug buttons on top too.  Oooh wait what’s that???  It has NFC on it, yey for easy pairing.  Not that pairing is hard but hey, it’s a nice feature.  Oh and here’s another little but great to see thing.  On the back the power switch is a real switch.  Not some software press and hold, you flick a switch, manually.  I’ve wanted that for ages on little Bluetooth speakers.  Hmm is UMI mind reading???

Grabbing my Lumia 735 and wiping it over the top of the thing and ding, press to pair appears on it.  Woo hoo, how easy is that, just like it should be.  Then I start it playing and first impressions are pretty good.  It’s a reasonably balanced affair, a bit treble heavy is on axis and it’s not going too crazy with the midbass hump.  Hmmm it’s alright actually, not perfect but not bad.

It is pretty nice.  It’s not trying to thunder out gobs of midbass because the speaker is tiny, tiny speaker’s can’t do real bass so this does the right thing.  It does what it can as then lets the deeper end go into rapid decline.  You do get a bit of a midbassy bump but it’s not silly overdone.  It therefore is over all, rather nice.  I do rather approve that the spec list says it only goes to 80Hz.  Though no specificity on the + – dB range on that but its good they aren’t trying to claim 20 and overblowing further up and ruining the bass that it does have.  Still, it’s a dinky little speaker and while it’s rather clean in what it has, it does roll away and it’s probably not going to please those that only care about more bass at the expense of any quality or accuracy.  Being that the drivers a itty bitty things the bass is much better with a clean little punch than it is at trying to sustain a gentle low note, it behaves well but physics is physics.

So while the little drivers may not be best suited to bass reproduction they are superb for mids.  Now these area a little Bluetooth speaker so let’s not get carried away and thinking you’re getting some LS3/5A besting marvel.  But you know for 25 quid it’s not just not bad, it’s really pretty enjoyable.  Particularly for rather mid centric things they are really quite fun and jovial, lively little things.  I’m currently listening to Natalie Imbruglia and I’m genuinely enjoying it.  of course  can pick out bits that aren’t quit right and detail that isn’t there but come on, it’s a little portable battery powered 25 quid speaker.  Now the mids are a little bit lacking it detail and dynamics, if you’re going for the greatest vocal performances you do notice that it’s a small thing, it can’t give you fullest depth of a performance, everything is that bit compressed into a more narrow range.  Still, as I said it’s a little portable speaker and for what it is it’s a little gem.

Now they are relatively an on axis thing.  Not to the extent I’ve seen elsewhere but these were a little more it its best when you were off axis.  The drives are a bit big for tweeters and they don’t have the greatest detail yet the do pull out a goodly level of detail.  There is a more compressed feet as they can’t do the fullest of dynamic ranges but they are really pleasant on the ear.  A nice quantity of detail with a nice relatively delicate feel.  These are going to blow your socks off but I can’t help being pleased and impressed in equal measure with its performance for what it is.  Still the rule is don’t go wild with super abundant, hard brittle treble.  It’s not the greatest treble reproduction in the world and if you get it on axis, pointed at your face and throw on some scratchy treble fest you will get what you asked for.  A scratchy treble fest.  Try sticking to things that are more polite up top and let it play to its strengths.

Being a little speaker there is largely no stereo separation as you’d expect.  The overall acoustic feel of it is pretty small too.  It can be loud but it’s more about giving you a more intimate feel to the music it plays.

It can dee a reasonable job in vocal dynamics but it’s not stealer.  Of course it’s a little speaker and its portable, battery powered so there isn’t really much surprise there.  Still it can do a pretty valiant stab of a decent vocally dynamic range.

Not so much as with power but volume.  It can be loud but it’s never is a room filling sound.  It’s not a big air mover and while it can be loud its never offers a large scale feel to anything.  Loud and shouty yeah, full and breadth not so much.

UMI claim that you can get 24 hours of playback at 50% volume.  That is a pretty impressive claim and one I didn’t verify.  If you think I’m sitting and timing out 24 hours of playback, you would be thinking wrong.  So from what I did use, it lasted ages.  So I’m not going to dispute that, still it’s a huge number compared with what others state so I’m a little sceptical.

The built feels excellent.  The thing is all rubber top and bottom and then the mesh grill that is the rest of it is all metal.  I’m not throwing it down a flight of stairs to test it but it looks and feels excellent.  Of course I have no idea what’s under the rubber but the thing feels fantastic in your hand.  Plus that rubber means the corners are rubber so I would hope that it should be able to survive a few knocks and bumps better than others might.

Pretty good, I made a call and while they did instantly assume I was on a headset they said they could hear me okay and I was intelligible.  They did say though there were little breaks so I wonder if that’s the background noise cancelling mics doing something.  Either way it works fine, they heard me okay and I could hear them very well.

Excellent.  It used to be £50 before and at that it may not be my top option but it sounds pretty good, looks super good and feels excellent in the hand.  It’s also got a couple little tiny things that really do make it stand out for me.  Those being the NFC pairing and the hardware on off switch.  Not exactly deal makers or breakers but they are pluses you don’t normally see on this sort of product.

This I really quite like.  Now it’s not the world’s most amazing sounding speaker ever, it’s decent and about as good as you get for something of this size as it is a fairly small little thing.  However its looks, are excellent. The feel of it is excellent.  The real hardware on of switch is great.  The NFC pairing is great.  The big easy to use buttons on the top are fantastic.  It’s all the little bitty details that aren’t by themselves very important that add up here to set this a little bit apart.  I mean like the NFC pairing it’s not like normal pairing is hard or takes more than a handful of seconds.  Yet it’s just a nice little touch and when the competition is so fierce its little things like this that make me like the BTS3.  It’s the attention to detail.  What really makes this come across as a great little product is the attention to detail, the minutiae UMI have put into it.

Acoustically while the BTS3 is a nice little thing it isn’t perfect, though I’m pleased that UMI are a little more honest about the frequency range, it’s not going to appeal to all so much.  They haven’t tried to thump out a big mid bass hump.  So I’d expect a more youth audience to not be so chuffed, this I felt was more at home with some gentle Barbara Streisand ballad than it was a chat topping hit.  The clean and simple mid ranged acoustic wanderings, simple and pretty on the ear.  More hard, thumping tracks that you blast out at volume it wasn’t so pleasantly composed. It did it, it was fine but more melodic harmonies were better.

So would I / should you buy one?  Yeah.  I really very much like the look of it and I like how it deals with gentle midranges.  Smooth and gentle stiff paired nicely.  You?  Well it’s got a lot going for it, that hardware on off means you can’t accidently leave it on by mistake.  The feel and its looks are really nice.  The big easy use buttons on the top of it and the NFC idiot proof pairing.  Want a little speaker for granny, all she has to do is wipe her phone over the top and hit pair on the screen.  Or maybe you want one for a small child?  Same deal and with the rubber clad top and bottom it should be relatively more hardy than other too.  It’s a great little Bluetooth speaker that looks great and offers lots of little attention to detail features for that really add up.