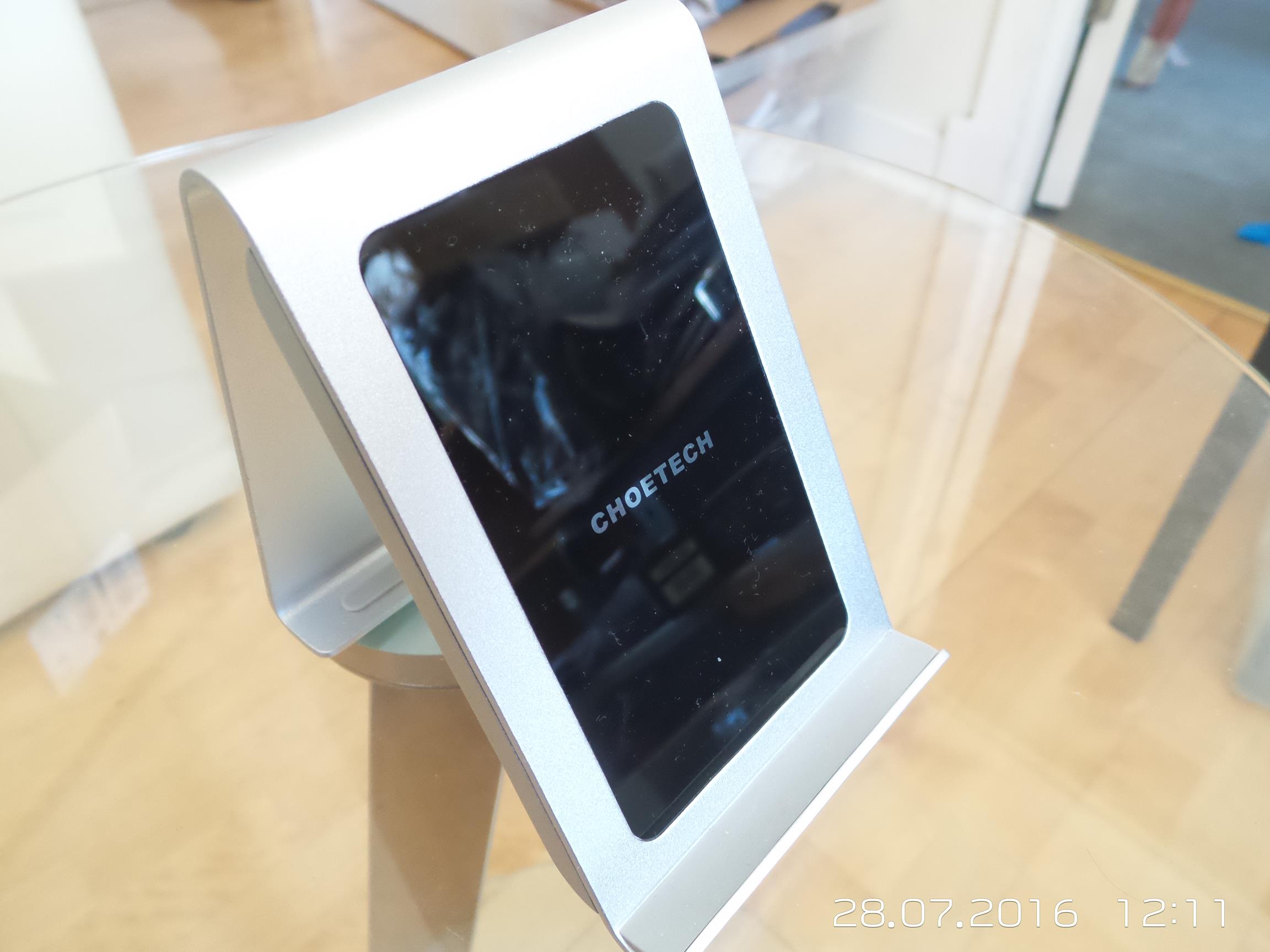 Choetech Qi Wireless Charging Stand,so its a Qi charging plate, but rather than be flat like every other its upright.  So how did I get on with it?  Read on and find out. 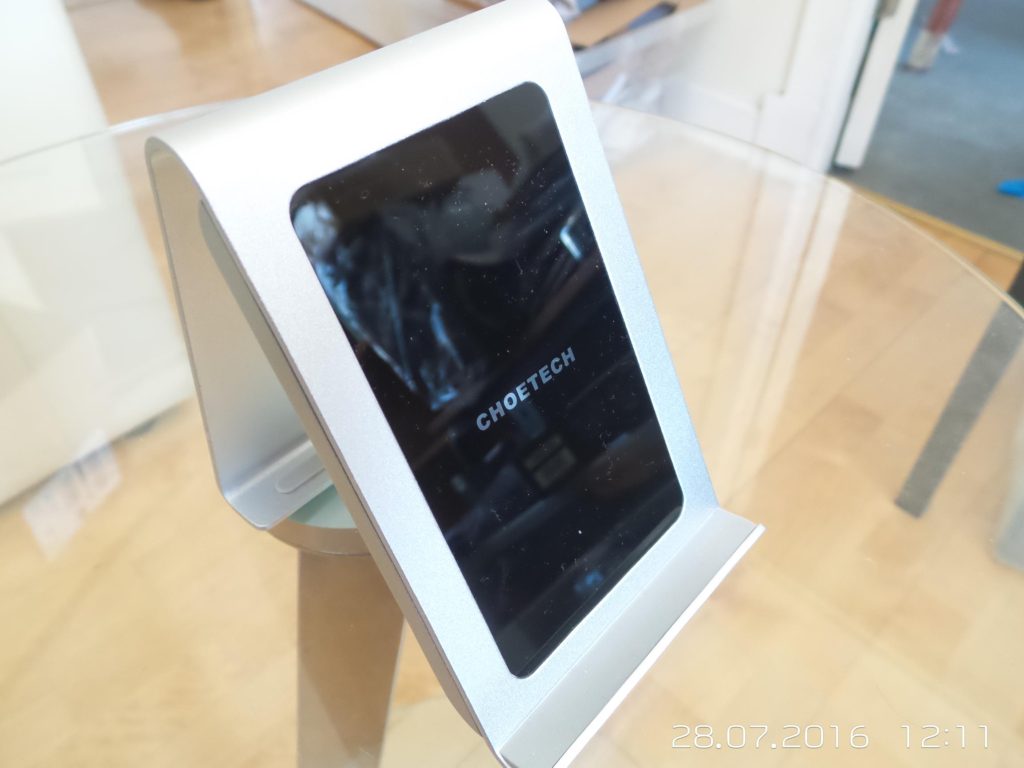 Thanks to Choetech for the sample.

Ooooh pretty, well okay it’s not like it’s that pretty but come on, for a charger, it looks pretty damn good to me.  Of course I’m a sucker for bare metal but even still no one’s looking at it and thinking ugly.  Oh and the bottom of the phone resting bit, thing, err lip, ledge whatever has a rubber layer.  So when you dump you phone in it it’s not resting on a hard metal surface.  What a nice little detail.  It’s also got a little rubber layer’s on the bottom too, so it’s not just bare metal resting on your desk.  Depending on what your desk is, especially glass, that’s a nice touch but mostly I think it’s to provide a good deal of grip.  The stand is firmly planted enough that it doesn’t slide back when you dump your phone down.

Looking around the thing I see that it has a short array of power LED’s and I’m not sure why there are 4.  Actually I’m not really that sure why they have them at all give they are on the side so you’re not very likely to see them anyway.  Hmm also I note that the micro USB socket is on the side, I can see why that would be the case but…….. it’s a bit of a shame as its going to mar such an otherwise pleasant aesthetic, such a shame it doesn’t come out the back of the charging plate bit rather than the side.  I notice that in the box, there is a white micro USB cable, which is fine I suppose but I can see I’m going to want a right angled cable to have it come out pointing backwards.  Hmm, curiously in the instructions it says that a plug adapter should be included.  It would seem that the UK sold version comes in two instances, one of which has no UK plug adapter and one that does for a little extra money.  Both come with the white micro USB cable.

Visually the stand by itself is rather an attractive object and I believe most will readily agree.  Visually if youre one of these people that has an Imac sitting on your desk then this is just the sort of looking Qi charger you’d want sitting beside it.  The thing looks nice.  However there is one caveat, the location of the micro USB socket on the side is such a disappointment visually.  I get why it’s there, it’s just easier rather than have it coming out of the back and then having to cut a hole in the rear leg of the stand to feed the cable through, out and away.  Would doing that look better?  Oh god yes but I really don’t know how much more engineering that would be and of course then how much that would add to production costs.  Fingers crossed the v2.0 comes out with it coming out the back.  Still on the whole it looks nice, it’s just it could look even nicer.

Now I did hit up eBay and order myself a right angled micro USB adapter thing so that the cable is immediately directed backward.  It is a great improvement I think but it’s still highly noticeable, I wanted a silvered / transparent outered one but I couldn’t find so I had to make do with plain old black.

While it’s not something you are likely to care about how it works the way it does but you should know anyway.  How can it work with a phone placed upright or with a phone in landscape?  Well inside the back plate, which is on the “front” plate, there is not one but three Qi charging coils.  They are therefore spaced out so it should make any difference if your phone isn’t lined up perfectly when you put it down to charge.  Nor if you change phone as phones are all different heights and the charging coils are not all in the same place exactly either.  Likewise for charging if you stick it down low, resting in landscape.  The charging coil still happily locked on and worked.  Yey!  Not naming names but one Qi charger I’ve got (that actually just died) was very placement fussy but here its fine.  Just slap phone down and that was it.  I never had any bother with it getting the two device to mesh.

Charging power, Choetech say you should use a 1.5 amp charger or more.  The thing you first note about using Qi to charge is that it’s simply not as fast as a cable.  That it’s still true here, Choetech can’t change the laws of physics.  So if you need a super-fast charge, use a cable but that’s not really the point of Qi or this stand.  This is meant to live on your desk all day and while your sat there.  Your phone should be in it, fully charged, trickle charging to keep it filled and when it rings or you need it, you just grab it.  The important think being that it’s always full and ready to go.  If you use a cable and the phone goes you basically have to unplug it first and then plug it back in and all that assumes you remembered to at all.  It’s a little thing, true but just being able to pick up and put down without thinking is extremely freeing.

Yey!  Slap the phone down wherever, any phone I tried and it always lit up and started charging.   If you haven’t used Qi charging before you’ll know that it can be pretty sensitive, you don’t get the coils in the charger lined up to the coils in your device then nothing happens.  It’s not the first time I’ve put something down on a charging plate and picked it up ages later to find it hadn’t been charging.  That (touch wood) has so far never been the case with this charging stand.  I’m not saying it’s impossible but of all my Qi devices I’ve never had that happen here.

Coming in at £18 without the UK plug adapter or £22 with one.  This isn’t the world cheapest Qi charger but it has the whole stand thing which is not only more practical to use, it’s attractive.  Also its 3 sets of coils gives you a much broader placement position so you could have the phone upright or laying out in landscape.  So it’s a good, solid practical charger and if you need that whole bare aluminium aesthetic for your desk it’s not bad.  Sure it’s a little pricey for a charging plate but it’s a nice looking quality product.

I like it.  When I spotted it on their website it was the thing saw and thought “ooooo I want one of those.”  Fundamentally it’s a charger and charging isn’t exactly sexy but as chargers go its looks pretty damn good if you ask me.  Sure it’s marred by that side facing socket but thanks to eBay a couple of quid got me a rear pointing adapter.  With that in use the Charging Stand has definitely won a permanent home on my desk, it’s not every day you get to marry decent looks with functionality and practical necessity is it?  So until v2.0 with a rear facing USB socket happens this is currently (to my knowledge) the best looking Qi charger you can buy anywhere.