adminPosted on August 2, 2016 Posted in Miscellanea — No Comments ↓ 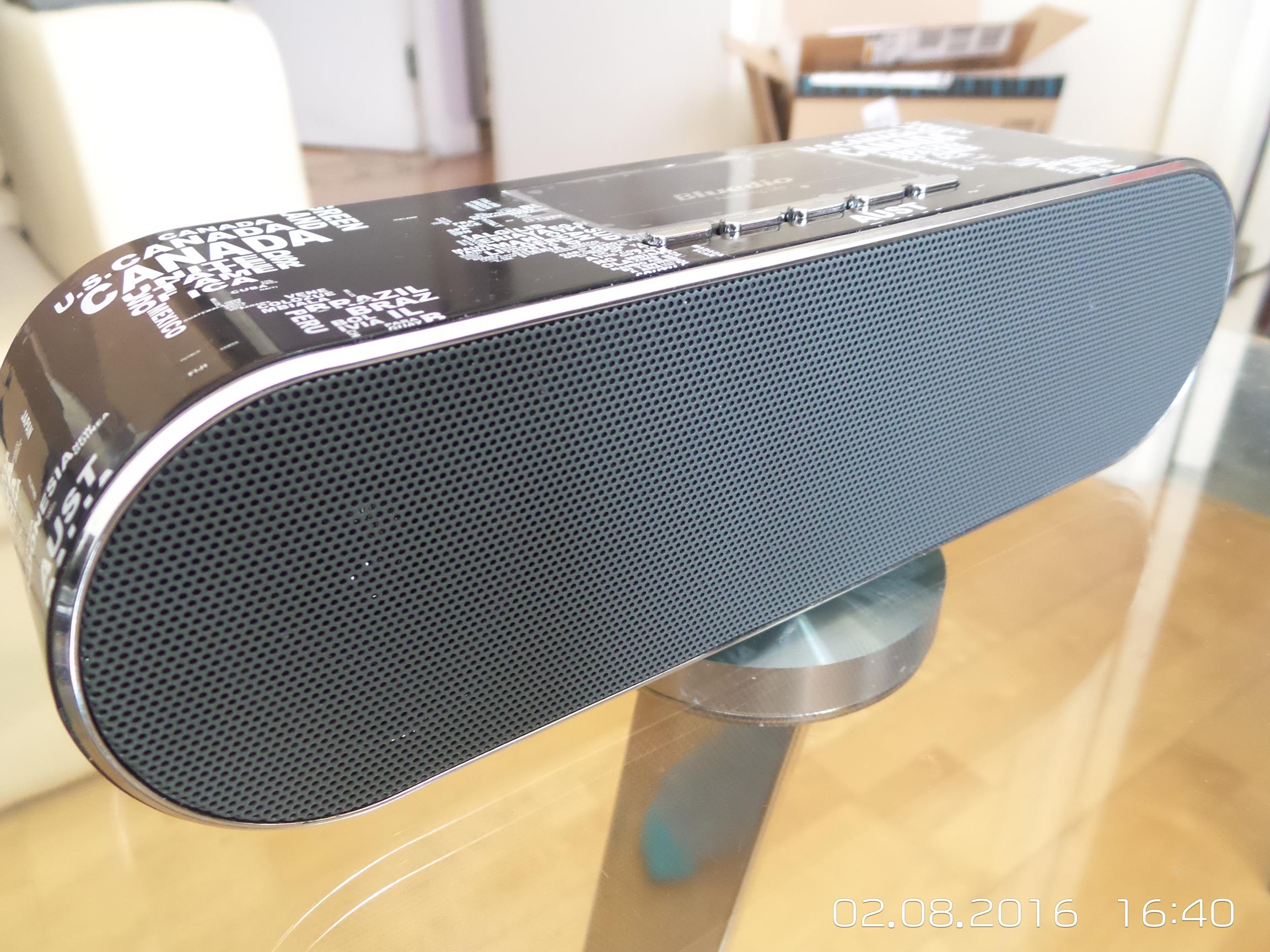 Bluedio AS-BT Bluetooth Speaker, Bluedio aren’t just a headphone company it seems but they do like their bluetooth don’t they?  So how does this little, or not so little, bluetooth speaker stack up?  Read on to find out. 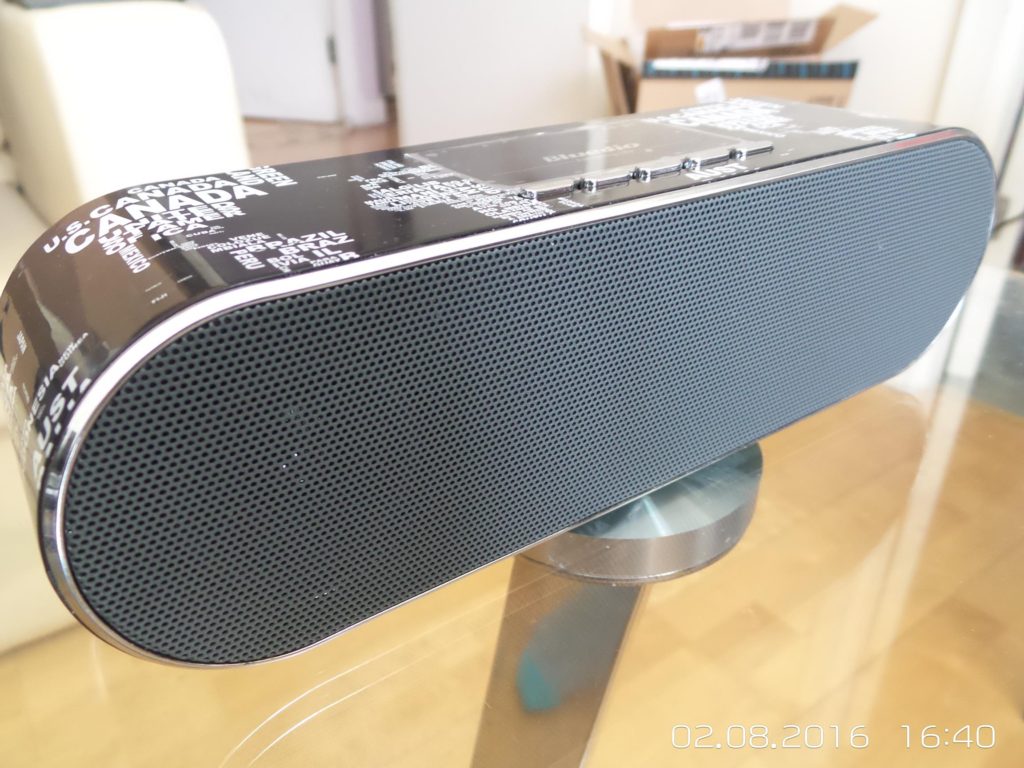 Thanks to Bluedio for the sample.

I have been having a little look at a bunch of different speakers recently and this one from Bluedio came in.  The box is just like that of their headphones but oooh, opening it up and the speaker is wrapped in neoprene.  I can decide if that awesome or weird.  Then I notice that the cover has on the back a belt strap and a carabiner too.  Okay someone at Bluedio are getting seriously optimistic about its use.  Surely if you’re going hiking / camping it’s to get away from the noise of modern life not to bring a stereo with you?  I mean I like the case thing, it’s really nice but lol who’s going hiking with it strapped to them?

Anyway….. firing it up and paring it my phone (Nexus 5)  and out comes music.  Hmm it has the same weird long press the volume down to skip track thing.  That is strange but it does work fine and you get used to it in seconds anyway.  Firing up a little “Night Swimming” and you can tell right off that this is bigger than the BTS22 I was playing with recently.  It just sounds bigger.  Though it’s got some “3D” effect button, yeah that’s not happening, like all DSP things it adds in some sort of flutter and I can’t say I’m keen.  The vocals, the piano playing, this is not at all bad.  Hmm it’s a bit better if you’re off axis to the treble.  Hmm also it likes a bit of boundary reinforcement from my desk.  Still this thing is pretty good.  Its mid-range especially, you get off axis just right and its tonality is great.  Burn in time.

Normally these of speakers do all they can to whack up the bass, mostly a mid/bass hump that tries to punch with all its might and has nothing much else.  That’s just physics, a little driver can’t move the same quantity of air as a big driver.  These don’t seem to do that though, they are trying to me acoustically accurate.  Thus I find that it’s rather well suited to more natural sounding music, acoustic, simple type stuff.  Where there isn’t really any artificial deep lows going on.  So it’s not trying to produce things that it’s ill-suited to.  It’s so unexpected, I find myself thinking they actually might benefit from a little bass boost button.  Though if they did, I’d probably think it all a mid bass hump.  These just are just much more polite in their bass reproduction.  Trying to stay true to the track and not turn it into a mid bass mess.  It is not going to appeal most to those who are more likely to buy this sort of product but to a more audiophile crowd.  I mean it’s obviously not audiophile grade sound but its balance and competence for something small, that you can throw in your carry-on luggage, lol that you can strap to your belt.  Something you could kick off your shoes in your soulless hotel room and slap on a little Norah, Susan Wong, the Krall woman, Puddles Pitty Party etc etc and like it, actually enjoy it.

Quantity wise, there isn’t gobs of bass, certainly not deep bass. They are great for deep vocals and deep cello notes but it clings to being tonally accurate as it goes down rather than rising up to keep the volume output going.  Firing up “Your Father And I” and the bass, well it tries and I really wouldn’t fault the quality but the quantity just can’t keep up.  It doesn’t even try to keep up.  If you’re looking for big thumping chavtastic bass you’re not going to find it here.  This is acoustic, lithe and graceful lowers.

The easy bit for speaker to get right and they do really really well.  There is a great tonality to them that just so long as you’re a bit off that treble axis, the mids are really good.  You keep to very vocal centric music (which I’m rather happy to anyway) then these do a really very pleasing rendition.  Des’ree, Tori, Norah, all sound excellent for suck a little and cheap thing.  There is a bit of a preference to lady’s vocals ranges but male vocals sound rather great too.  Again this isn’t going to be your Hi-Fi but for something you can throw in a bag and use in a hotel room, you could survive with this.  Mids are light, flowing and ever so slightly smoothed.  They still retain a very fluid sense, flowing, light and unencumbered with they’re not attempting to produce a massive mid/bass hump the vocals can get on with being great vocals.

I’m pretty pleased with the quantity, though you should note that they can feel a little middy.  I’m absolutely fine with that but be aware, in speaker terms these are aiming for what is more akin to an Etymotic like balance than a Beats one.

If you get them dead on axis then the treble is just too much.  Though with their design they are a pretty directional so unless you pointing it at your face then you’ll be off axis anyway.  Then the treble tames in quantity rather nicely and gives a more natural sounding level.  There is a bit of an inclination though to spit out a lot of treble.  Time and again I’m drawn to very vocal centric music.  High quality recordings, acoustic stuff like that of Susan Wong sounds delicate and highly pleasing.  Owl City’s electronica and treble extravaganza that is “Cave In” and the treble is exploding all over the place.  Dear god you get that on axis, in your face and the treble is ear ravaging, very sharp and cutting.  There is just too much but off axis, say as you wander round the room it’s much more appealing.

Its treble quality is pretty good.  There is a lot of highly emphasised detail but personally I feel it could be toned down a bit, relax and mellow.  It’s certainly a very exciting and attention seeking treble.

In the mids, there was a great deal of scope to really crank the volume out yet it’s not what its naturally inclined to do.  It’s not a behemoth that will shrink to nothing and then come roaring forth.  Its little drivers are far more concerned with being acoustically good rather than being a beast with great dynamics.

Its headline output can be quite noticeable.  Certainly if you want to blast out sound and upset the other hotel room guests you absolutely can.  However I don’t think you’ll want to.  Where the AS-BT shines is in its realistic vocal expression and to turn it up louder than the level it was originally sung, it just feels wrong.

The spec say 5 hours, though I’m sure I got about 6 and half from it. Which is odd as you don’t normally get more than the quoted but hey.  It seemed to go on for ages though maybe I just wasn’t playing it loud enough?

The thing certainly feels solid.  The buttons on the top though, hmm they jiggle a little bit but I don’t really mind.  I don’t get what the blank panel on the top is for though, why has it a little screen protector bit of plastic over it?  The grills on the front and back are both metal and feel very solid.  The whole thing feels pretty sturdy, certainly I couldn’t make the body flex any, the grills wouldn’t flex either.  Not to the point I got uncomfortable trying to bend it.  With that rather nice case I would (fingers crossed) hope it should survive going through the abuse that airport luggage gets with ease.

While I called out and I could hear the other party super well, they said I sounded rather distant.  They could hear me okay ish but to stop being misheard I had to raise my voice a little.  Still its primary function isn’t to be a speaker phone.  I’ve also no idea where exactly the mic is on it.

Very nice.  Though it’s a bit of a strange product as I think it’s sonically suited to a more acoustically mature, audience.  However it’s a little at odds with its looks I think.  I do like the overall package, the case thing, the cables and its mid-range especially.  It’s a rather enjoyable speaker though….. it has a sibling that for just a fiver more has WiFi and for the sake of a fiver I can imagine why you would pick this Bluetooth and line in only version.

This is a strange thing, most little speakers I expect to be aimed at the “youth” market and as such I expect there to be everything possible done to produce as much of a mid/bass hump as it possibly can.  Its quality doesn’t matter it’s just all about making as much as possible.  This however doesn’t do anything like that at all, if anything it’s the opposite.  The bass here is trying hard to be audiophile grade and from such little speakers it’s never then going to be a bassy beast.  It says sod chavy bling and it descends with dignity and composure.  It’s just not what you’d expect at all.

Then where it shines, the mids, the tonal purity it aims for and its natural feel.  If you play back natural, acoustic stuff, no artificial crazy lows and limit the battering of cymbals then you get a remarkably grown up and pleasing little speaker.  It isn’t going to fool you into thinking you have an entire orchestra before you but that perhaps you’re listening to said orchestra through a little window.  You let it play to its strengths and you get a really nice little thing that could be just the thing to keep you musically sane when in hotels far from home.

So should you/ would I buy one?  Well acoustically while this product is nice, that it’s got a sibling with the extra WiFi stuff at almost the same price it’s hard to say buy this one.  Acoustically though it’s a rather mature product that is so unlike the majority of smaller items that try to fart out as much bass as possible, at any acoustic cost. This is much more of a purist product and as such I rather like it.  It can’t compete in terms or scale and grandeur with bigger things but it shares a tonal signature that is so much more in line with what an audiophile would expect from a speaker.  This just happens to be a little, wireless and portable speaker.  It’s nice, I like it.