adminPosted on February 1, 2020 Posted in Miscellanea — No Comments ↓

After much arguing with O2 eventually I got a hold someone who works at O2 that wasn’t a clueless idiot and they agreed that they could manually change the tariff to the 5G advertised tariff of Unlimited everything for £40 per month.  It shouldn’t be so hard to persuade a network to take your money but O2 apparently hate money.  Still, it got done eventually.

Upon returning home where I happen to live right next to an O2 5G enabled mast I started to show a 5G signal.  Woo hoo!!!  Naturally I ran a few speed tests and they have been most curious.  If you recall I would eventually get a 2300Mhz LTE signal but then I wouldn’t get 800, 1800 or 2100 Mhz carrier aggregation so I would eventually only get a mix of about 60 mbit vs the 120 ish I could when the other 3 carriers were aggregating.  I still have no idea why this was happening.  Now that I have 5g enabled I no longer seem to get any 2300 Mhz.  Maybe it’s a modem limitation on the Mix 3 5G I’m using?

Speed test time, the phone says I’m getting a 5G signal at 5 bars yet the speed test shows 80 to 100 mbit most of the time then on running another test it leaps to 200+ mbit.  Then it goes back to 60 ish mbit.  Signal also likes to jump to 3 bars randomly yet 3 bars showing seems to most often result in the faster speeds.  Why???  I have no idea but anytime it shows 5 bars on 5G speed tests won’t hit above 80 ish mbit.  This means that O2’s 5G is generally performing about the same as its 4G LTE network did on average.  Granted the 5G network can at times hit about double what its 4G network can but even being 50 feet from their mast produces wildly variable results.

It is possible that the issue is mast back haul, that would explain the lack of average performance change but if that is the issue, then it speaks to a much larger issue with O2.  If this is one of the upgraded masts to support 5G then is it possible they really did not upgrade the back haul.  If the back haul on their masts is so lacking that it cannot provide an actual increase in throughput from what 4G could do……… given they just upgraded the mast I’d expect it won’t be due another upgrade for a long while.  Now I realise most O2 masts won’t be enabled for 800, 1800, 2100 and 2300 like mine is so most masts won’t be able to hit those high LTE speeds but if this a sign of how their national 5G network will roll out…… it does not bode well.  For context, the EE phone in front of me consistently hits circa 200 mbit yet I’m likely the only person on the O2 5G mast given its very limited coverage 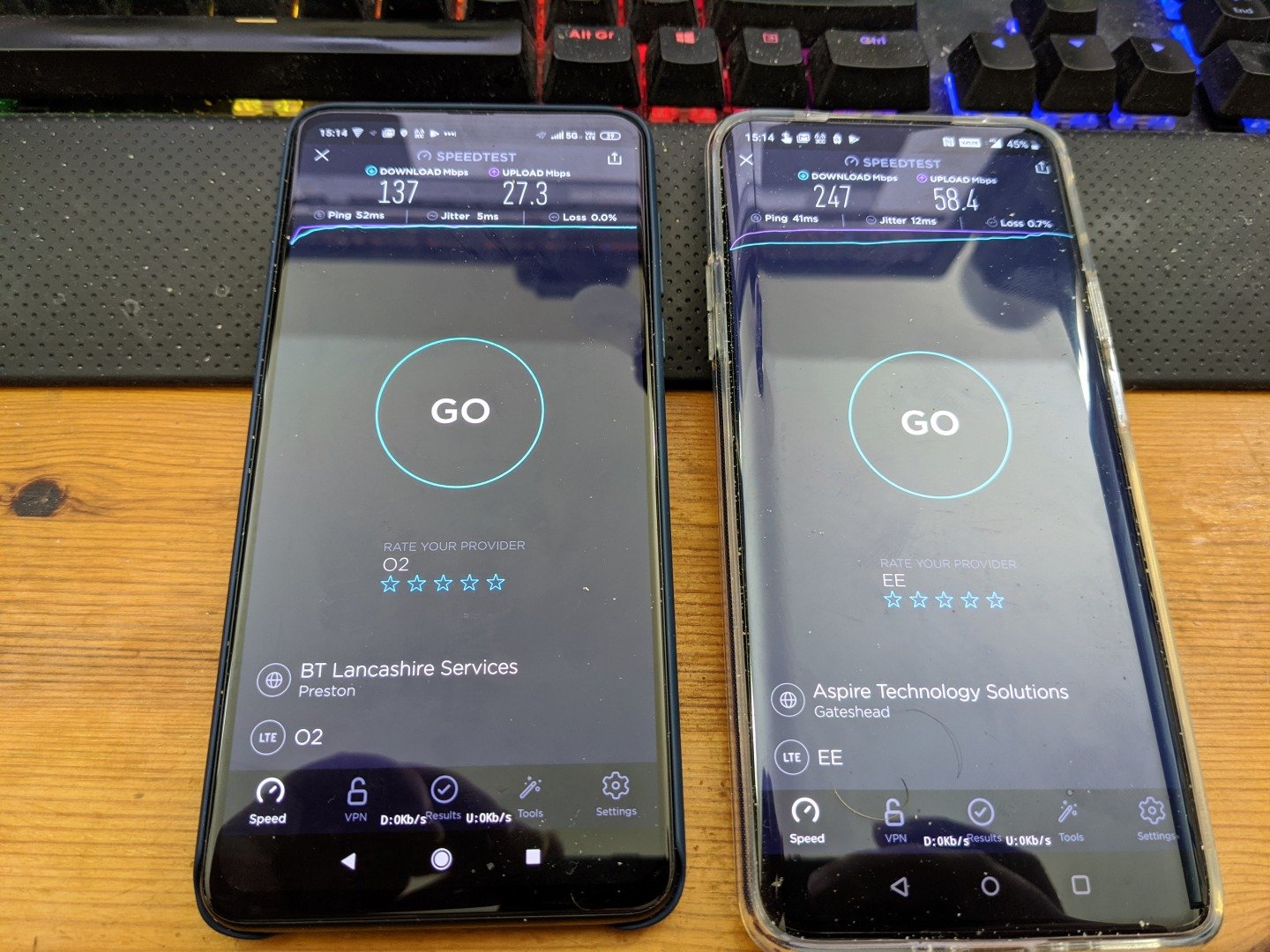 Conclusion:  O2 may have got its 5G network started unlike 3 and it may have rolled out some great use of its 4G spectrum holdings, unlike Vodafone, however its 5G offering its distinctly meh.  I would hope this is simply teething issues and will drastically improve in time.  If not then it would seem right now that EE is running leagues beyond the other networks in performance and at £40 per month its only a hair cheaper than EE (£44) but Voda at £32 and 3 at £20 not to mention how insanely hard O2 made it to get without buying a phone and contract from them I cannot say its worth the money or the fight.