adminPosted on November 21, 2016 Posted in IEM Reviews — No Comments ↓ 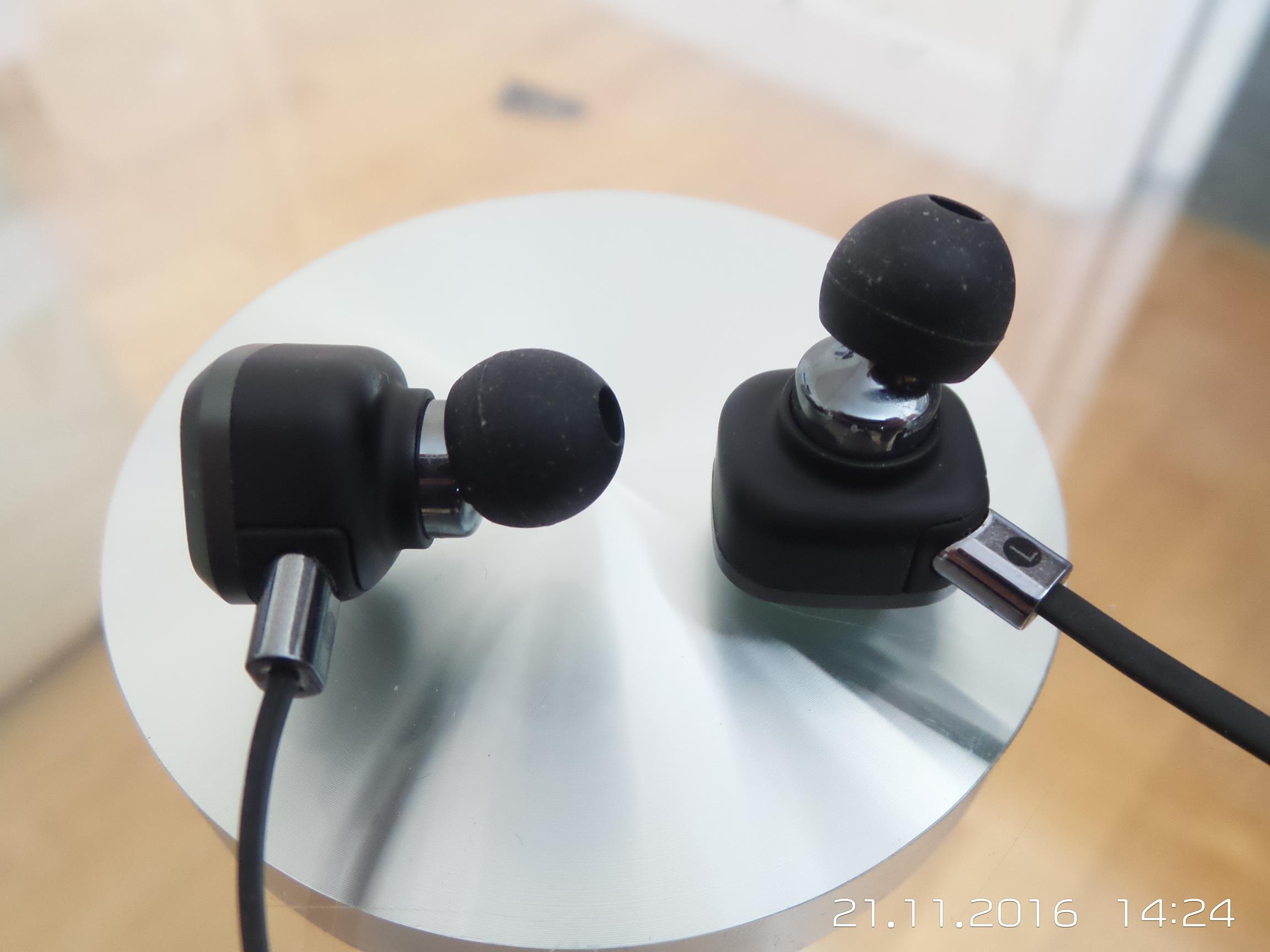 The UMI BTA6 Magnetic Bluetooth Earphones Review, yes another phone makers move into earphone production, so how do these ones stack up? 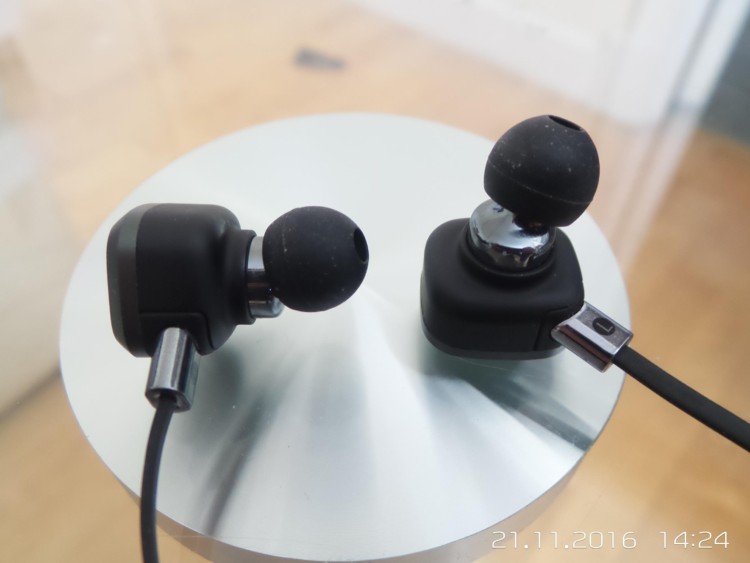 Thanks to UMI for the sample.

Now while I know UMI isn’t primarily an earphone maker, these look highly similar to things I’ve seen in the past.  Particularly with the magnetically snapping together.  So I’m going to have at fish out the Jesbods, err though I forget which one was which.  Mind you the box these came in, whoa it’s metal.  Yep they come in a mini biscuit tin like affair.  I think the last time a saw earphones that came in a metal box was the SE530 and that wasn’t exactly yesterday.  Still, metal, that just seems wildly overkill for a low priced product like this.  In side it we have a manual, and a little poly bag with the accessories in it.  We have a micro USB charging cable and a bunch of tips and inner ear guide things.  No little case?  Ah well the Jesbods didn’t either.  They must have come out of the same OEM right?

In the ears (after a little charge up) and whipping of the stock tips for some foamy ones that were on my desk. Hmm, a pleasant balance not huge overkill bass.  Treble a touch diminutive.  Mids are fine, nothing is leaping out as m as the centre of attention.  These would seem to be a pretty balanced affair.

They are a rather boosted but not quite as much as they might have been.  There seems to a bit of the far bottom end a little absent.  Flicking to the QY13 and there is definitely a resemblance.  These are maybe a little level in the bass as opposed the rounder hump of the 13 that would make these the more grown up a presentation.  These are a little more reticent to rise up and thunder out a flabby low end, they stay that little bitty more composed.  Trying to flick back across, these do appear to be a little more levelled, these are just that little bit more polite.  Trying to skim through some more aggressive tracks and the bass will engage more volume but there is a still a fractional politeness there.  These are working rather nicely in more constantly low production rather than just thumping out an initial impact.  There is something thought that I’m just not quite putting my finger on.  It’s not the depth, it’s that there isn’t a heapy rounded hump so the bass just is a bit more staid than is more common at this price point.  It’s an interesting way to go, making them rather more versatile acoustically than just the gym going bass thumpity thump thump.  These are more generalist in their presentation.

Tonally they are a little but greyish rather than brown. There isn’t the warming taking place that you can often get, the bass is a little more grey, more detached, more flavourless and less skewing of the tracks being played.

There is that same slight greyness creeping in.  It’s not adding a warming flavour but it is darkening a touch, the vocals remain towards a slightly more dry presentation.  It makes it rather versatile and isn’t as flavouring imparting as some other’s these therefore are happy to play back whatever you throw at it.  It’s a bit more composed and even-handed. It’s a little bit curious really, normally things of this type are much more warmed and flavoured.  Yet as flick to other things these are going for a more even handed style, so you could really use these for whatever.  Though many of the style it seems more adept at doing are things that I’d imagine more listeners would be wanting something higher up the food chain.  Sometimes a things can be too evenly handed I guess.  The darkening tone but not being so richly warmed things retail a little better clarity and openness than others do but it’s all a rather slight colouring.

Detail wise these are reasonably open so you’re better able to be aware of the details and vocal nuances but these don’t have the resolving power to truly shine there.  Of course they don’t, they are a cheap product and are Bluetooth too so there was no way that was going to happen yet others hide things more than these do.

Rather wisely their treble here is somewhat muted.  Again nothing that comes to the fore is their slightly greying rather than going for a more warmly rich presentation.  They darken to obscure things upper end but they aren’t suffocating it with warm gooeyness.  As a presentational style it’s reasonably preferable to me, I’m not wild about suffocating warmth though it does mean they are loss obfucative in their upper end talents.  Nothing at this price is going to have a masterful treble rendition and while there do dial the quantity down rather somewhat its still more noticeable.  They don’t oppress you with warmth which would hide those things.  In very prominent highs they have a nicer tonality than others but they are also more readily noticeable that they struggle with fine detailed shimmer.  That won’t be a surprise to anyone I’m sure given their pricing but it does make them less forgiving to bad mastering and bad bit rates.  As a more dry and pure sound I prefer it to over heavy warmth but there are down sides to it.

Quantity wise the treble is a bit muted, it’s not far behind the mids and bass but just enough to make it not be the star of the show ever.  Polite, just a bit tamed and sanded.

Not bad.  They are reasonably scaled and they have a rather nice left and right distance.  Not so much with the depth but for the price you got a rather nicely integrated assemblage.

Well, these are meant to be worn down and I don’t love that so swapping the channels you can wear them up.  It’s not perfect and compared with wearing down I seem to regularly have a sight fit issue with the left channel.  It constantly was a touch muffled in comparison to the right no matter what I did.  I don’t know why this happened but it was the case.

Fine, worn up or down I was happy wearing them for hours at a time with no bother at all.   Mind you I did mostly wear some foam tips that were on my desk rather than the silicones they came with.  But then I’m pulling things out a lot more in a review than anyone would ever do so in normal use.

If you wore down you would get a bit.  There isn’t a cable slider things so tuning my head from side to side I did get some.  Now if I wore them up there wasn’t any but then I got that slight channel imbalance.  Still it’s not like it was a huge issue ever.  Oh, hold on, yes you do get a slider thingy.  It was in one of the inner ear guide things.  Cool.

It is a flat cable which did mean they less loved wearing over my ears but other than that, no issues.  Given the length of the cable I wouldn’t expect anyone to have any issues with it.

You get the charging cable, 3 pairs of tips a chin slider and 3 pairs of inner ear guide thingys.  You get a reasonable selection I guess but I’d have happily sacrificed the ear guide things for a baggy to keep the earphones in.  Still you can also buy cases without issue if you want one and I would suggest you do, things die by just getting stuffed in a pocket.

Nice.  I did have that channel thing from time to time but physically they looked great.  The beds themselves looked great.  Really nice for the price that dark metallic gun metal colour, very nice on the eye.

They were actually not bad.  Fine for normal out and about and on a bus too.  Not really for Tube or flights but you know, better than nothing.  They will be easily enough when playing for you to accident get run over if you don’t remember you need to use your eyes near traffic when using earphones.

Well I liked them quite a bit.  I am a total sucker for that gunmetal colour. Then the matte black then the gun metal slack colour again.  Now you can’t really see most of that in use but hey, I liked them anyway.

They say up to 8 hours.  That’s a bit more than other similar things claim but in use I can’t say I found them to be noticeably less than that claim.  The standby time was a rather significant 240 hours.  So that’s ten days, you can but that wasn’t going to get tested anytime soon, or ever.

Well their price seems a little bitty variable, for the UK its £19, the US US$27, Spain E23 and Germany E28.   So if you’re in Germany, I say buy from Amazon Spain instead.  Still for under 20 quid there are pretty nice value.  While I’d swap their fancy metal box for a little storage bag or something but you can’t really fault a pair of Bluetooth earphones when they are coming in at this price.

So these are an interesting product in the fact that they aren’t all that interesting.  You see these are rather similar in nature to some other products and while they have tuned them to be a little bit different and that tuning is something on the whole I approve of, it’s curious.  These are more pure, less warming than other things close to them and while I like that, I wonder if their target gym going crowd is?  The bass here is that bit more composed, bit more polite and reserved, linear and easy going.  So if I was picking an under 20 quid Bluetooth earphone these is a good chance I’d take these over some other but I’d not be looking for thumping basstastic chav cannons.  These aren’t that so as to how good a things that is well, it can only be up to what the end user is after.

Now while their balance is a little unusual, it’s still a pretty broadly versatile thing.  Going from Basshunter to Enya in seconds and they are rather pleasant and non-overly influenced rendition of them both.  It really has the versatility thing down.  So if you have a broad range of musical tastes then these might be a good option for you over some genre specific thing which is more highly flavoured.

S would / should you buy one?  Me, well if I was picking an under 20 quid Bluetooth set, maybe, these would certainly be in the running though I’m just not totally sure what I’d do with them.  Versatile yeah but I’m the sort that doesn’t exactly just have one generalist.  I’m a fan of having 20 specialists.  You?  Well do you want things that are specialists or something with more versatility to them?  If you want something that’ll happily do Enya and then Steps then the fat blond girl these are a pretty solid option.  In that case then these are certainly something for you to consider seriously as they are rather versatile in a way most things can’t quite nail as well.