Yes another and another new product from Brainwavz.  I’ve started calling them the Samsung of the earphone world, why have one model when you can have 50??? 🙂  Anyway, these are a little bit different, these are squarely aimed at the sporty side of life.  However you don’t need to be a gym bunny to make use of these,  what matters is how the sound after all right?  If you want to know hew they do then keep on reading. 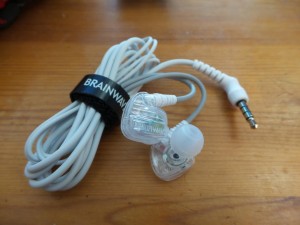 Thanks to Brainwavz for the sample.

The box, its plastic, bit of a change, not important just curious as to why the change?  Anyway inside its all pretty familiar territory, the usual black with red trim case.  The buds hmmm I look at them and my brain screams M6!!!  There is a clear resemblance, not just in the looks, but come on, they both come in translucent/ clear plastic.  Oh and a black too.  Damn it, I’m going to have fish them out aren’t I?  I must admit, the things look damn good, they really do, okay I’m not wild about a white cable but the buds especially with the translucent tips on, awesome looking.  Of course I’ll be whipping those off instantly for the included pair of Comply’s.

In the ears, oooooh these are pretty good.  Unless something goes horribly wrong I’m betting these are getting 5 stars.  The bass is epic, a little big but damn it’s really, really good for an el cheapo.  Oh my god maybe it’s a crazy fortuitous pairing but first impressions are super duper positive.  Though I can see the bass maybe getting a little much for me over long use but as these are so aimed at sporty, a lively energetic vibe isn’t exactly a shocker.  Still these are just US$25 right???  That’s like £17, delivered.  Hmm I don’t like how competitive this price range is getting, there is so little separating things its getting silly.

Quantitatively I can see their target demographic not necessarily loving the quantity.  These are somewhat boosted but not by all that much.  It’s slightly humpy, a bit on the mid/bass cusp and then rolls away.  Its actually a little odd as there isn’t the more typical expansion of the bass.  These are tuned more like a grown up, near low end monitor type sound rather than something for the gym.  How very curious.  Perhaps this in Brainwavz saying that this is the IEM for hard core audio peeps to use, those who quality over quantity?  Not that the “quality is quite all that, it’s a little on the softish side but that’s fine, its quantity if too punch would be bothersome but its still really rather nice for the price.  The price is what wins it here, these are really good.

Depth does rather fall off but I can’t say it bothered me or that I am disappointed, it’s a lovely, even trail away and quite tastefully.  It’s all so acoustically grown up and mature, bassy yes but not at all wild or chavy.

Again they are really nice, rather on the warm and creamy side as is to be expected, being a Brainwavz and at its price it’s the sensible sound style to go for.  Lilly Allen’s “Not Fair” has me mouthing along and half dancing in my chair.  Vocals are a little dominated by the lower end and they haven’t quite the breadth to them I’d like to hear but….. that price again.  The price dictates so much and while I find myself seeing what it’s not doing quite right it’s hard to keep in mind that they come in at US$25.  They are easily sufficiently clear, a bit of warmth, sucking a bit of air out of things but mostly very enjoyable on the ear.  A touch creamy and thick but highly pleasing and enjoyable.  They are so nicely grown up sounding.

They are going to be much too muted for some, too rolled away but they are perfect for me.  There is easily sufficient detail, high hats ping / clash whatever away nicely in the back.  Clarity too is really nice for an el cheapo too.  Twenty One Pilots “Car Radio” as the cymbals and high hats clashing away in the back, cleanly and with just barely enough edge to be alive and joyful.  Of course the bass rip roars in and dominates making the highs a little obscured in the back but it’s all done so nicely.  They are clinging on staying as they were tonally and not breaking up or getting abrasive nor scratchy.  Even with cooler, dyer sources they still remain nicely easy on the ear.  It’s a big generalist, populist crowd pleaser.  It pleases me too.

Scale they do pretty well.  They do big, voluminous and with spades of power and authority.  Distance is a little more so so but instrument placement is pretty nice.  Mostly though it’s a bass near the front, mids all around the middle and the treble in the back or off to the sides.  Its most pleasant.

For the price range these will be a shock to most users, you have to wear them up.  For me that’s great and they fit me perfectly.  Yey for my apparently normally shaped ears.  I have seen talk of someone having issues but that’s just not something you can find out without shoving them and seeing.

So intricately linked with fit, for me it was all practically perfect.  I had zero complaints, in they went and bingo, instant perfect fit.

I saw the pics of these in black or “Frost White” the black ones are err black.  They look opaque to me but I can’t quite tell.  The “frosted White” however, they have white cable and white jack but the buds, well they are transparent plastic and like the old M6 from back in the day, this style, to my eyes looks fantastic.  Visuals can be very personal but come on, look at them, is there any one who’s going to see them and think “oh so they’re ugly?”  I really don’t think so.  At their price not many things pay much attention to looks and sound good, these are the whole package.

Very little.  One of the big bonuses of wearing up is you don’t get the same microphonics you do wearing down.  These you can’t wear down.  However they still have a chin strap if you are doing something that needs even more help.

These didn’t need amping.  They did the usual improvements, sometimes they were quite noticeable but on the whole, these are meant for the gym not for plugging into a desktop amp!!!  They will run just fine therefor out of any old thing.  The little 1G Shuffles worked great on them.  Actually their rather potent and cooler sound paired up exceedingly well with the XF-200’s, they made quite the little ideal gym pairing.

Pretty good.  Towards the upper end of why a dynamic can do.  So it should be fine to have your music thumping away, keeping you all gym motivated without making those near you want to smash you in the face.  It would do for the commute there too, either walking or jumping on a bus.  Probably not flight or regular Tube worthy but you know.  As always, if you’re not used to IEM’s you need to start using your eyes when out, you just won’t hear traffic creeping up behind you at 50 mph until it hits you.

Hmm I not that it’s while not like the old m6’s translucent one that discoloured near the ear guide bit.  God that was years back, otherwise yeah it’s a cable, its fine, flexible, no complaints.

As usual Brainwavz give you a nice little bundle.  You get their standard case, the Velcro tie thing, shirt clip, a handful of tips and a pair of Comply’s, is there anything else you could want?

Excellent.  I don’t know how they keep doing it but for the money the sound quality is great, they look great, the build quality seems great.  What’s not to love about them and their tiny price tag?

Brainwavz seem to be launching some sort of mega attack on the lower end earphone market.  They keep pumping out so many things and they are all so bloody good, there is so little between things getting that it’s a right bugger trying to review things.  At what point do you start slicing the market into US$5 slices because things are so bloody good that a dollar here or there makes a tangible difference in the price / audio ration, it’s insane.  More to the point it’s driving me insane.  Just how am I supposed to slice between this and the Omega and the Jive and the Delta and the Alpha and that just within the Brainwavz range!!!

If it helps, there are the only ones that had me singing and dancing to A1’s “Celebrate Our Love.”

So of the rough price price bracket, from Brainwavz these are the ones I’d take, every time.  Not only do I like the looks, I like their shape.  Seriously they are a practically perfect fit for me.  Then to put icing on the cake they are the ones with the sound I like the best.  From Cheesy A1’s Celebrate Our Love” to the grandly melodic Tori Amos’s Doughnut Song” these pair so well with my acoustic tastes.  They handle everything with aplomb and left me not only toughly pleased but a little in awe of how Brainwavz can pair things for my ears.

So should you buy one?  Yes.  I know these are being pushed as “gym” earphones but they are good too, I’d say for proper audio crazy’s (yeah you know who you are) that want a pair of beaters they can take to the gym and drench in sweat then give these a bash.  They are so dirt cheap what really have you got to lose by trying them?